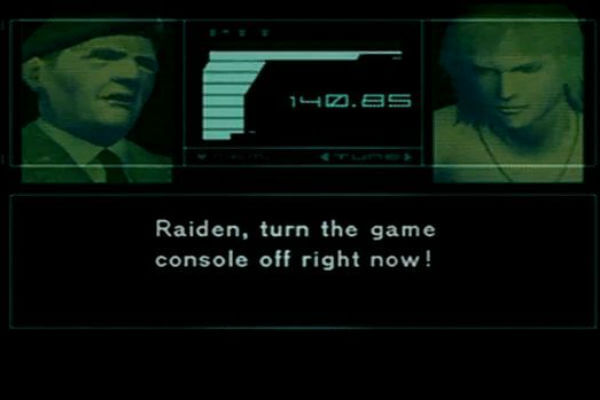 Hideo Kojima is known for breaking the fourth wall in his games, and nowhere is this more apparent than in his wacky, mind-bending masterpiece: Metal Gear Solid 2. MGS2’s devestatingly beautiful protagonist Raiden is infiltrating the terrorist-occupied oceanic platform: Big Shell. However, Raiden is captured and stripped of his clothing, leaving him to gracefully cartwheel around – his pale, well-defined buttocks on display – unable to perform takedowns as his hands are occupied preserving his modesty.

When things really get weird is when his operator for the mission – the gruff-voiced Colonel Campbell – starts calling Raiden up and giving him bizarre metafictional advice like: “Turn the game console off, the mission is a failure!”. At least a few thousand of those playing the game must’ve taken his tip and switched off their Playsatation 2s. Hey, he was right about plugging the controller into the second port to defeat the mind-reading Psycho Mantis in the first Metal Gear Solid! After aggravated teenagers everywhere had reset their consoles, they would soon find out that Colonel Campbell was not the same lovable father figure they’d spoken to back in MGS1. He is, in fact, just a persona created by a secret, world-controlling group of AIs known as “The Patriots”; manipulating Raiden in an effort to create the ultimate military training simulation for a new generation of supersoldiers.

If that sounds like a needlessly convoluted plot twist, well… I suppose it was! It was also pretty brilliant. Check out the video below where the Patriot-Persona-Campbell rants nonsensically about how we should all stop playing games and go outside! Of course, these are just the crazed ravings of an insane AI though, right? Right?