The future of couch-based multiplayer is looking just fine The idea of pick up and play couch multiplayer games is unfortunately, in the year 2016, quite a dated one. Gone are the days of friends coming over in order to play Kirby’s Air Ride or Super Smash Brothers Melee, as they have been replaced with the less time-consuming and much more accessible world of online multiplayer. While playing with friends online certainly allows for more flexibility, there’s just something about sitting around a TV with some friends, happily unleashing streams of profanity and telling one another how much you want to kill each other as you desperately try to come in first in whatever game may have your complete and utter attention. Surely the couch gaming scene isn’t completely dead, is it? There have to still be games coming out that encourage real-life interaction while playing video games, right? Well, have no fear, Stikbold is here.

Stikold is a twin stick, 70s-themed, arcade-inspired dodgeball game where pretty much nothing but complete chaos is guaranteed withing each match. At its core, goal of Stikbold is very simple, as it is same as that of any standard game of dodgeball; get people out by hitting them (notice I didn’t specifically say “with a dodgeball”), and be the last person (or one of the last people in a team situation) standing. The controls of Stikbold are similarly simple, and incredibly easy to both learn and master. Players are able to run, slide, catch, throw, and even adjust the trajectory of said throws, as they fight for survival. Aside from that, this game is about as far from a normal game of dodgeball as you can get. Courses ranging from a hippie-filled park complete with a van full of Flower Children trying to run you over to the middle of the ocean (although I couldn’t tell you which one) and even Hell itself will having you frantically getting out of the way of, and perhaps also using to your advantage, many more objects and obstacles than just mere dodgeballs. While largely promoted as a “grab all of your buddies” couch multiplayer, Stikbold does, in fact, have a Single Player campaign; and a pretty good one at that! The story of Stikbold is also about as bizarre and chaotic as the rest of the game, so it fits in quite well. Dodgeball pros (and total bros) Björn and Jerome have placed first in the dodgeball championship every year, except for the very last. Their loss wasn’t due to skill through, as you might think. Rather, the rival team for last year’s finals starred none other than the beautiful and talented Heidi Starbrow. Though a fierce competitor, it was her looks that won the title for her team; Björn opted to pretty much just stare at her in awe during the title match instead of actually playing dodgeball. Needless to say, that is why they lost. The game begins one year later, on the morning before the tournament. Once again, the finals come down to Björn and Jerome facing off against Heidi (and her less-important, less-beautiful teammate). Both teams are practicing in the local gym, when suddenly a man in a Devil costume (or maybe it’s just the Devil himself, who knows?) appears on scene, captures both, and flees. While their coach suggests staying put, as this means that our heroes won’t even have to compete for the title match, Björn objects; stating that he (and, of course, Jerome) needs to save Heidi so he can win the title match fair and square… not to mention the fact that she’s a total hottie.

The levels within the Single Player campaign alternate between “normal” games of dodgeball and rather creative boss battles and span across a variety of maps each teeming with their own unique hazards to avoid and non-regulation objects to use in lieu of dodgeballs. Normal levels pit the two protagonists against various other teams including beach bikers and an old ship captain fighting off hoards of whale protesters. After all players on one side are out, the side left standing gets a point. The first team to reach three points wins. The bosses a bit more varied, and require some quick thinking and a bit of strategy in order to beat. Also, unlike with the regular dodgeball games, there are no second chances; if both Björn and Jerome are knocked out, it’s game over. The bosses are never too difficult, but it certainly can be frustrating to get all the way to the end of a battle only to lose and have to start over completely just because of one mistake. Every level comes with three challenges. While they add an additional element of strategy to the campaign, a lot of them felt overly-frustrating and tend to take away from the fun factor rather than add to it. Characters are unlocked through simply beating levels, so the challenges really do not even seem to serve a purpose outside of trying to collect Achievements. Though the Single Player mode is largely a positive experience, it is not completely without its downfalls. While entertaining throughout its duration, the campaign barely stretches past 10 levels and can easily be completed within a single sitting.

Single Player also does actually have a co-op feature, although it’s a bit confusing. Rather than allowing a second player to join in and drop out as they see fit, Stikbold requires you to either choose “single player” or “co-op” at the beginning of the story, and forces you to stick with it. Some of the challenges do differ depending on which mode has been chosen, however the ability to not switch between the two is more frustrating than it may seem.

While playing alone is good, Multiplayer is really where Stikbold shines through. Up to four friends can play at the same time along with two AI (a total of six players, regardless), and can duke it out in either teams or a free-for-all in one of several courses each with their own hazards and play styles. Extra characters are unlocked through the Single Player campaign and, while all characters play the same, it’s fun to have variety. In terms of how multiplayer works, there isn’t much more to be said than the fact that it’s just like single-player except with more people. It’s pretty easy to end up playing for longer than you originally had planned; especially if you have several friends playing with you. The multiplayer aspect of Stikbold alone is enough to carry the game.

Stikbold’s art style is rather vivid and whimsical, disregarding realism for a more cartoony and campy look. Characters are square and blocky, and almost look like they could pass for Lego mini-figures; something very fitting for this game. The environments are also quite cartoony and blocky, but don’t let that fool you; they’re still very much alive and quite visually appealing. The overall movement of both the characters and environment is quite fluid, with little to complain about. The only noticeable oddity is the fact that, during the celebratory dances that characters do after scoring, the movement goes from fluid to quite choppy. It’s somewhat ironic considering that this choppiness happens during close-ups of characters and nowhere else in the entire game.

The music is also quite lively, which only serves to add to the overall experience. While not necessarily on the cutting edge of video game music in terms of memorability, each level has a distinctive theme and, regardless of where you’re playing, is always lively. The score compliments the chaotic and hyperactive nature of the game quite well, and only enhances the ensuing craziness.

Stikbold set out to be a couch multiplayer, and it did its job quite well. Though a bit limited in terms of number of courses, the sheer amount of action and excitement packed into one round of Stikbold will certainly keep both you and your friends coming back for just one more game time and time again. It looks like the future of couch multiplayer is doing just fine. 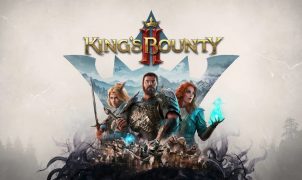