Where is Sophia? Blues and Bullets Episode 2: Shake the Hive continues legendary lawman Elliot Ness’s gritty search for Al Capone’s granddaughter who’s gone missing, but has managed to leave a trail of breadcrumbs that only the best detective can uncover. In this episode I was reminded almost immediately of the choices I’d made in the previous chapter, and I’m happy to say that throughout the two episodes developer A Crowd of Monsters have cooked up; I’ve felt my decisions have had a nice mix of prompt results and long-term consequences.

Just as I thought Episode 2 was taking the safe road and straying far away from the creativity of episode 1, The End of Peace,  it decided to throw some really interesting gameplay elements at me. Gone was the crazy notion of taking cover behind actual words (yes, you took cover behind random words that appeared on screen in the first chapter) and emerging in its place was one hell of an eerie nightmare sequence that had me questioning whether or not I was playing a crime-noir or a horror game. I was surprisingly reminded of what I was playing as a part of the nightmare had me walking across a bottomless pit on a thin red line à la Max Payne. I’m not sure if this was an intentional nod to Remedy’s classic, or just an amazing coincidence, either way it had me smiling ear to ear. Graphically, the second episode of Blues and Bullets continues the same monochromatic “Sin City”-inspired color scheme, where everything is silver but anything red will show up in a bright crimson. It works well with the game’s art style but I can see the visual style being a turn off to some players. Certain characters in the game take on a marble statue-like appearance that comes off as comical, and on occasion pulled me out of the experience. That said, I don’t think that a full color or straight black and white scheme would really work here. The silver shine that appears on textures seem to make them pop off the screen and, considering a huge portion of this episode takes place in a submarine, it just make everything look even shinier. Overall, the game’s environments look simply stunning, but player models have taken a back seat compared to the rest of the package, leaving a noticeably big gap in quality between the two.

Interacting with the other characters in the game is once again done with by the player a series of choices. I did have a few instances of these decisions having an unintended consequences due to their vague nature in the first episode, and that has also continued in episode 2. Single word answers that I thought would be a simple choices have turned into Ness speaking in a way that didn’t seem to convey what I intended to choose. If the dialogue choices were a bit broader I probably would have felt more confident in my selections and not so confused. That’s not to say all the dialogue was like this. Most of what I wanted Ness to say did come out the right way, and a few of my choices that didn’t seem to have much bearing on the story did manage to come up again. A sequence in the game where the dialogue worked extremely well was when Ness was being questioned about his past, but he’s unsure of the answers since he’s acting as someone else while undercover. I was terrified I would choose the wrong answer and the person asking the questions was, how do you say, not the friendliest of people. It managed to provide a tense situation that not many games are able to achieve, and I was pretty surprised that I felt this amount of dread while answering the questions. A large portion of Shake the Hive is spent investigating a submarine, and it’s here that Ness will put his detective skills to work, as the “board” sequence from the first episode makes a return. The scope is larger here as the investigation isn’t is no longer limited to a single floor of a small home, but now features multiple floors and offices of the sub. Once again, Ness must piece together all of the clues he finds scattered in the environment while piecing them together on a corkboard that connects pictures of evidence together to eventually tell a story. This story, when completed on the board, informs the player what has transpired and where they should start looking for Capone’s granddaughter next. Being in a larger area made it a bit more challenging as certain clues were found far off from where they pieced the story together. I hope future episodes continue the trend of larger crime scenes and deeper investigations.

The shooter sequences that appeared in the series’ debut have also found their way into episode 2 and, unfortunately, haven’t changed much at all. There just isn’t much to do here except duck in and out of cover while waiting for the enemy to do the same. The cover system is a bit broken, since exposed arms and legs don’t seem to take hits unless the enemy is fully out of cover. On several occasions I had clear shots of body parts but just couldn’t do any damage unless the enemy decided to put his full body in harms way. Enemies that were out of cover would just stand and shoot without any fear of taking a bullet, while other enemies stayed in cover too long and didn’t seem to ever want to come out. Thankfully, Ness has unlimited ammo and you can just shoot to your hearts content waiting for then enemy to decide to jump out. The whole time I was in these firefights I just wanted to be able to walk around but the only movement your given is switching cover points. These sequences are detrimental to the game’s story but just seem to go on a bit too long and don’t seem to be fully fleshed out.

In the grand scheme of things, the Blues and Bullets story is an interesting tale that has me clamoring for what comes next. Without getting into too many spoilers, I think it’s safe to say that developer A Crowd of Monsters can put together a tale that is both compelling and frightening at the same time. If the third episode can cut down on the repetitive gunplay while continuing the trend of making the investigations more ambitious I think it could be the best one yet. 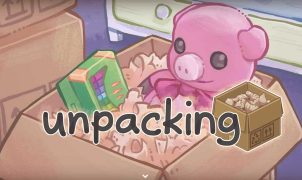 Unpacking Review: A Lot To Unpack I found it funny that as I checked out the new PS5 release of Unpacking, I was sitting in my own new home,…