The Walking Dead: Michonne – Give No Shelter Review (PC)

Shambling towards the finale After a somewhat lopsided introduction chapter, The Walking Dead: Michonne returns for another trip into the tortured mind of the series’ machete-wielding bad ass in Give No Shelter. The second act of developer Telltale Games’ three-part miniseries isn’t without its moments, but this origins story still fails to really capitalize on the strengths of its leading protagonist enough do the character justice. What’s left is a series that, not unlike its omnipresent zombies, seems to be doing little more than shambling aimlessly to its inevitable messy demise.

Give No Shelter picks up immediately after the end of In Too Deep. Trapped in the bowels of Randall and Norma’s ship, Michonne and Sam are forced to come up with a plan to rescue Pete and find a way out of the mess they’ve found themselves in with the heavily-armed natives. It’s here Michonne’s reactionary nature is showcased in all its glory, as a bloody showdown leaves the encampment little more than smoldering embers, setting off a dangerous game of cat and mouse with Randall and his band of thugs.

One of the things I found the most enjoyable about The Walking Dead: Michonne’s debut chapter was the way Telltale explored the character’s tumultuous grasp on reality as she battled her inner demons – usually at the worst times possible for her and her band of survivors. Unfortunately, apart from a few hallucinations of her missing children – who fans of the comic series will finally know by name as Colette and Elodie – these moments of reflection and character development largely take a back seat to moment-to-moment action. We are treated to another brief flashback into Michonne’s past that details the beginning of her search for her children that seems like it could be setting the stage for something big in the series’ finale next month, but it’s delivered without any of the impressive style and clever direction that made similar sequences in the previous episode so interesting that it feels more like padding than anything else.

While it would have been nice to see the episode really capitalize on Michonne’s character a bit more, we still get a welcome window into several other supporting characters in this episode. The most most notable of which one being Sam, who up until this point seemed like a pretty one-dimensional figure in the story. After being hit by one of Randall’s bullets as he’s attempting to gun down Michonne, the pair, accompanied by Pete, attempt to find refuge in Sam’s home. It’s during this chaotic scene that we’re offered a window into just how Sam found herself in hot water with Norma’s group to begin with, and the events that led to the fiasco on the boat which we saw unfold in In Too Deep. It’s a welcome dose of weight to a series that, up to this point at least, seems to be populated largely by caricatures rather than compelling characters. Randall and Norma still seem like cookie-cutter psychopaths, and would-be compelling characters are killed off just as quickly as they’re introduced. It’s understandable for things to unfold quickly given the Michonne’s truncated, three-chapter scope, up until now this breakneck pace has made it hard to really care for any one character of the bunch introduced so far. Given Telltale’s penchant for crafting immensely compelling characters, this is a crying shame. While In Too Deep went a bit overboard with the action-oriented QTE events, Michonne sheathes her machete for much of this episode in favor of a few more interesting endeavors. It’s during this chapter that we first see the heroine lob off the jaws and limbs of a pair of zombies and walk them like putrid pets to avoid detection from a pack of wandering ghouls. Another stomach-turning scene tasks players with tending to that aforementioned nasty bullet wound Sam has fallen victim to. Yanking the slug from the meat of her battered shoulder and cauterizing the wound with the glowing end of an iron poker is enough to make players with weak hearts and stomachs race to the nearest bathroom. Telltale’s The Walking Dead is a series that’s always reveled in its brutality, and this episode does so in a way few others have managed to reach in terms of gruesome imagery. This is especially true for when Michonne is given the chance to exact some bloody payback on Randall. Shattering the deranged hillbilly’s hands in a tightening vice is immensely uncomfortable to watch, making the scene that much more impactful.

These events certainly overshadow the ones in the series’ debut chapter, but they’re also essentially the most control you’ll have over Michonne in this episode. Give No Shelter is by and large a painfully linear affair, and you’ll spend the overwhelming majority of your time watching dialog sequences unfold and QTEs play out than exploring the world around you. In fact, you spend more time meandering around the narrow confines of Michonne’s high rise apartment in the episode’s major flashback scene than you do anywhere else in the episode. A focus on narrative is to be expected in any Telltale release, but this chapter takes the sensation of being a mere spectator to the experience to a whole new level.

Telltale’s adventures have always been about choices, and sadly The Walking Dead: Michonne‘s three-episode nature seems to leave very little room for players to make a real impact in the way the story unfolds. Whether or not you show Randall the business end of a pipe wrench or show try to show restraint when confronted with Norma’s gang of bandits, everything Michonne touches seems destined to be burned to the ground as events steam ahead to their bloody climax. If Michonne were a typical, five or six episode run, an entry like Give No Shelter would be forgivable mistep. However, with just one more episode left in the series, it seems like another plodding entry in a series that had so much potential. Even still, I can’t wait to see Norma and Michonne cross paths again, and I believe Telltale has what it takes to end the series on a high note. 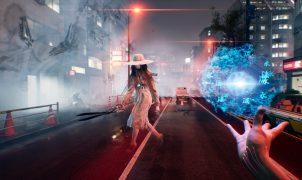