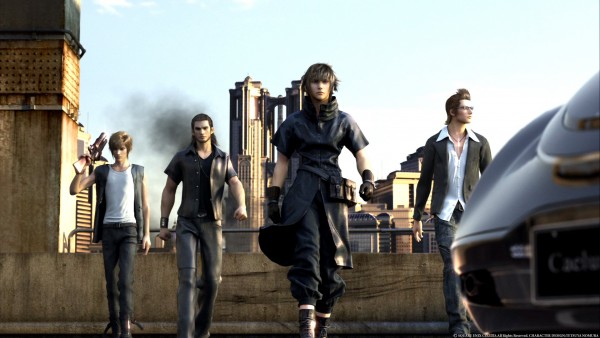 After nearly a decade, Square Enix has finally decided to announce the release date of the latest, and what they want to be greatest game in the much-beloved Final Fantasy series. After showing a gorgeous new trailer for the game with cover music of “Stand By Me” from Florence and the Machine, complete with new eidolons, a promise to make the game harder to be truer to the older games in the series, multiple scenes of the car breaking down, and a tiny bit of the story hinted upon.

Yoshitaka Amano once again did the art for the signature logo for this iteration. As well, an absolutely captivating rendering of the art was shown in 3D.

Yet another trailer was revealed showcasing new Final Fantasy XV gameplay. Vastness abounds in these trailers, where one needs to take Chocobos to travel around. They move extremely fast, can drift, and hover around the field. If riding giant birds isn’t your style, the car is another option, and it has a radio that plays classic Final Fantasy music.

Combat looks to be improved a bit from the demo that came out in 2015. Magic is clearly shown to be in use and can affect the environment, and moves seem to come out a bit quicker as well. A monstrous Titan cuts off the trailer with a mighty God’s Thrust to the ground.

Another trailer purely focuses on the world that will be in Final Fantasy XV. From lush forests, to dark caves and tunnels, to bustling cities, the game is trying its absolute best to have everything you’d want for environments.

Afterwords came the announcement of a five episode anime based upon the game called Brotherhood: Final Fantasy XV (which you can see above) and the first part is available now on YouTube, with the rest coming before the game is out. If traditional anime isn’t your style, how about a CGI movie that has been hidden from the world for the past 3 years? titled KingsGlaive: Final Fantasy XV, this will be a full length movie, coming out later in the year, and before the game releases to download and stream worldwide, with Sean Bean and Aaron Paul voicing prominent characters.

After all the movie news came about, yet another trailer came out of the gang playing a pinball minigame called Justice Monsters V, which will be available for android and iOS with preregistration starting now, with the game available before Final Fantasy XV comes out.

A free demo without having to preorder the game with the story of young Noctis will also be coming around, with a trailer showcasing an Alice in Wonderland vibe to it. After the trailer came a small taste of live playthrough showing a bit more of the battle system and certain panels allow you to play as the monsters themselves. Dubbed Platinum Demo Final Fantasy XV, this demo plays a different part of the story not in the main game, and is available right now on PS4 and Xbox One. 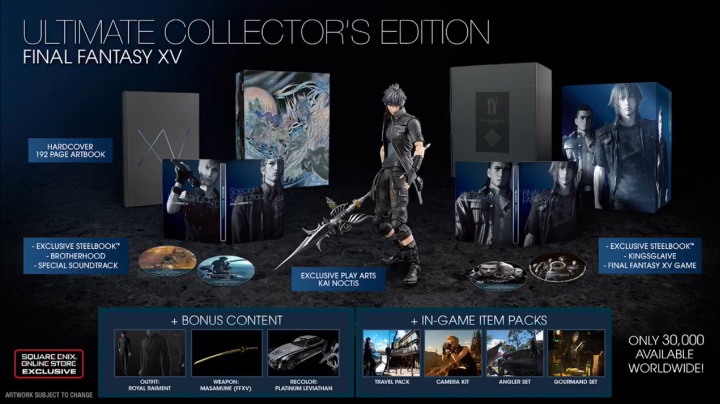 The Deluxe Edition of the game was showcased, which will give you bonus DLC items and the CGI movie on it, but if you want to splurge and get one of the 30,000 units of the Ultimate Collector’s Edition, which nets you an artbook, A steelbook of the anime and CGI movie, a figure of the main character, yet more DLC, and a soundtrack, then hurry up, as they are available for purchase right now.

The stream capped off with the official release date of Final Fantasy XV being on September 30, 2016, and a final trailer, combining new footage and the shots from earlier in the stream, signaling off with the car turning into an airship, flying to the great unknown.

With all this news, it’s actually surprising that Final Fantasy XV is even coming out, much less with all of the bonus features that Square Enix wants to shove down their fans’ mouths. Do you have any interest in getting any of the bonus features, or are you just excited that the game is coming out at all? Let us know below!