Trillion: God of Destruction is certainly a game with an original concept. The latest title from the Hyperdimension Neptunia series developer Compile Heart puts players in control of a legion of feisty demonic females as they work to stop the game’s insatiable eponymous creature from gobbling up the Underworld like a Langolier after a trip to his local pot dispensary. Created by Masahiro Yamamoto, best known for his work on such titles as Nippon Ichi Software’s Disgaea 4 and The Guided Fate Paradox, the game oozes devilish charm as it forces players train their six Underworld Overlords from hapless whelps to unstoppable God-killers. Unfortunately, myriad technical missteps and some seriously repetitive gameplay conventions keep this quirky adventure from ever reaching its full potential.

Trillion’s story begins with the forces of hell under attack by the game’s titular terror, who was thought to be vanquished by Satan ages ago. Players assume the role of Zeabolos, the third Great Demon Overlord and grandson of Satan as the long forgotten menace descends upon the Underworld to gobble it up once and for all. Zeabolos, his brother Azaroth, and a legion of demons attempt to beat back Trillion but are ultimately defeated. Azaroth is killed, and Zeabolos is left with his soul hanging on by a thread. However, before Trillion can finish Zeabolos off, the Overlord manages to use all of his strength to pierce the monster with his sword, gravely wounding it and forcing it rest for several weeks until it can regain its energy and continue its steady march towards the heart of the underworld. With Zeabolos at death’s door, a mysterious woman named Faust appears, offering to give the Great Overlord a shot at vengeance in exchange for his soul. Unfortunately for Zeabolos, his return to the land of the living doesn’t go quite as smoothly as he would have hoped. He’s been left a tattered, zombified shadow of his former self. Knowing he’d never be able to defeat Trillion in his current state, Big Z enlists the help of his six demonic Overlords, each of which is modeled after one of the seven deadly sins, to take up arms and bring down Trillion, promising the lucky lady who brings down the God of Destruction once and for all the ultimate prize: the throne of the underworld itself.

The flow of the game revolves around how players choose to spend their time during Trillion’s resting periods. Each chapter begins with a number of cycles (weeks) before Trillion emerges from his slumber and continues his attack on the Underworld. During this time you’ll be able to perform a number of actions each day, including beefing up your current Overlord – you can only choose one candidate to play as at a time – in preparation for the fight with Trillion. This is done by participating in one of several daily training regiments, with each one doling out experience points that can be used to level specific stats. Undertaking training exercises consumes stamina, and you’ll have to be mindful to spend a day resting after several workouts to avoid injuries, which can result in the inability to gain experience for a set number of days and other disabilities. After you complete five training sessions you can spend the training tokens you accrue to explore the Valley of Swords, a rogue-like dungeon similar to those found in the aforementioned The Guided Fate Paradox to gather up precious loot and gold to fund your war effort. Hell, you can even butter up the masses of hell to dole out massive donations to line your war chest and even present the Overlords with gifts to bolster your Affection Points, which serve as a vital buffer between your current heroine and her health bar in the bouts with Trillion. The premise of the game certainly shows promise. After all, there aren’t a whole lot of games that task you with primarily focusing on one big bad for the duration of the adventure. You’ll spend an ungodly amount of time in Trillion simply trudging through the same few menus over and over again as you train your heroine in an effort to ready her to battle. The training activities are essential to progression, but their core mechanics are painfully shallow,  as in after a just a quick button press or two you’ll be awarded a set number of experience points to spend on upgrading your attributes, purchasing spells to use in battle or passive abilities to give you a permanent edge on the field. Considering the game’s titular baddie has a whopping trillion hit points you’ll need to pare down to bring him down for the count, you’ll spend countless hours mindlessly tapping away to beef up your character with zero effort to show for it, making the sense of progression feel almost entirely arbitrary and unsatisfying. The Valley of Swords segments spice things up a bit, as they allow you to take control of your Overlord and explore a brief dungeon, battling random monsters and pillaging treasure chests as you attempt to find the dungeon’s exit within a set number of turns. However, each floor of the dungeon looks identical to the last outside of its layout, which keeps them from ever becoming more than a simple means to an end, rather than a memorable part of that package. This is a real shame considering just how satisfying dungeon crawling in The Guided Fate Paradox felt.

At the end of each cycle you’ll be able to test your mettle on Mokujin, a wooden dummy with the same attributes as Trillion. These battles, as well as those with Trillion, take place in a long, grid-based corridor as you march your way towards your enemy, picking off lesser mobs and dodging attacks in the process. To call these bouts a trial by fire is an understatement, as you’ll almost assuredly be beaten to a bloody pulp countless times before you invest some serious time into your characters. This is due not only to the Mokujin and Trillion’s tremendous pool of hit points, but also due to the game’s maddening control scheme that seemingly fights the player at every turn. Movement across the map is stiff and cumbersome, and you’re unable to move diagonally without shifting the camera on its Y axis with the Vita’s two shoulder buttons. Simply put, it feels utterly tedious and as graceful as steering a refrigerator strapped to a skateboard, and it takes away from your ability to focus on the dozens of attacks that pepper the environment as you work your way towards your adversary. Once an Overlord falls in battle against trillion – and they most certainly will – you’ll be able to unleash a “Dying Attack”, which allows you to do some lasting damage to the beast ahead of the next Candidate’s assault on Trillion. These effects range from sealing away a part of Trillion’s body so he can no longer user it in battle, to dealing sizable damage or erecting a barrier to keep him at bay while the next Overlord trains. This adds some welcome strategy to the mix as you weigh your best option moving forward. Additionally, characters who die will impart their successors with a chunk of their experience points and several items from their inventory, making the transition from zero to hero a little more bearable the next time around. Overall these are cool ideas that add a bit of depth to the progression,  it’s just a shame the battles with Trillion themselves seem so sloppy and forgettable due to the game’s clumsy battle mechanics and frustrating controls.

Even still, despite the game’s clunky mechanics, there’s still plenty of things the game does right. In terms of writing, Compile Heart has done a great job of creating a wild and varied cast of characters any fans of the Disgaea series will surely love. It doesn’t hurt that their voice acting is entertaining as well. And even despite the game’s quirky cast of characters and over-the-top character designs, the story manages to pull you in as you learn more and more about Trillion and its motives and the Overlords underlying reasons for doing exactly what it is they do. From the greedy demon with a heart of gold Mammon to the saccharine sweet Perpell, each of the game’s main characters is truly endearing, which is surprising considering the game’s purgatorial setting. Sure, they may be at war with the Heavens, but that doesn’t mean they’re monsters, now does it?

Trillion’s soundtrack is also quite entertaining thanks to the the work of Phantom Brave and Disgaea composer Tenpai Sato, who brings his signature layered sounds to the game, complete with haunting choirs and delightfully sinister arrangements that bring the lovably diabolical Underworld to life. It’s just a shame so many of the themes repeat so often, as a few extra tracks would have gone a long way towards spicing up the countless visual novel sequences that drive the game’s story forward.

While undoubtedly rough around the edges, those looking for an unconventional RPG with an entertaining story and absolutely punishing gameplay may find something to love with Trillion. It’s just a shame the core mechanics that make up the experience are so painfully unpolished and repetitive. Compile Heart certainly deserves credit for trying to fuse so many genres together. After all, it’s not every day we get to experience a game that’s tinged with SRPG, roguelike and dating sim elements. It’s just a shame that each component, from training your Overlord and vying for their affection to exploring the Valley of Swords and even fighting Trillion himself, feels like a mere sample of something that was initially meant to be much greater than what’s present in the final product. Given a bit more time in the oven, Trillion could have been something truly memorable, but as it stands the game never quite manages to feel like one satisfying, cohesive experience.

Despite its flaws, there’s undoubtedly something to be said about a game that lets you bring down a tyrant with a whopping 1,000,000,000,000 HP. If you want to cross that lofty goal off your RPG bucket list, Trillion has you covered. 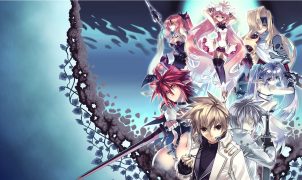 On a quest to defeat debt! It has been a while since I’ve played a game that was intentionally funny, and not just ironically funny. Humour is subjective and,…