Humans and machines are getting closer than ever before. We keep our phones with us wherever we go, are all interconnected across the world, and can even do things like repair hearing and replace missing limbs. It doesn’t seem like too much of a stretch to imagine a world in which a huge chunk of the population of our world walks around with cybernetic augments of some kind. The Deus Ex series has always hit very close to home in terms of what that future could be like. If George Orwell’s 1984 predicted our current world, then perhaps Deus Ex has done the same for some point in our future.

With Deus Ex: Mankind Divided coming later this year as the second part of the series’ recent revival, the story of this potentially-realistic future world is far from over. In an effort to expand that story and world even further, Deus Ex Universe tells the story that bridges the gap between the two newer game. Can Deus Ex Universe: Childrens Crusade stand up as a fitting and worthwhile part of the cybernetic future-scape? As it turns out, whatever they’ve augmented this comic with, it’s working out pretty nicely. Deus Ex series protagonist Adam Jensen plays center stage as usual, but is not alone. Following the cataclysmic Aug Incident that changed the world’s view of cybernetically-augmented humans forever, things are getting prejudiced, angry, and downright dangerous. Jensen has enlisted as the newest member of Task Force 29, an Interpol operation charged with fighting against the rise of terrorist activity from both sides, as the social and political divide between humans and transhumans grows ever greater. Deus Ex Universe: Childrens Crusade tells the story of Adam’s first mission, across the span of five issues.

As a first issue, Childrens Crusade #1 is compelling enough. There’s some tension between Jensen and the rest of Task Force 29; some see him as a potential threat, and all as the new guy. Jensen comes off a bit as the gruff, emotionless protagonist too many games try to create, but his narrative power in a comic format allows him to be more than that. I his own gruff way, we see him make a genuine attempt to be seen as an equal within the group, and see that he has some pride when he has to react to prejudice against him as an augmented human.

That exact prejudice is part of what makes Childrens Crusade an enjoyable read thus far. Even though Adam is the main character as usual, he only takes up about half of the narrative. Of the rest, some is employed by the rest of Task Force 29, a couple of whom exhibit personal sensibilities for or against certain sides of the social struggle around them. The remainder is interestingly taken up by a news chopped flying overhead, manned by a biased reporter running full commentary over the incident, and eventually interfering with it to a degree. This Rush Limbaugh-type figure adds an interesting element of antagonism to the situation. The squad is fighting terrorists, but in a way, they’re also fighting the press, and angle I hope the series continues to run with.

Childrens Crusade #1 uses color well, sticking to a few general hues per page. Everything is well-composed, with lineart that takes on a self-defined style full of sharp edges reminiscent of the visual style of the games themselves. The team takes a run through a terrorist cell in order to save a group of captive children, who become an important part of the narrative. They appear to be hostages at first – as the obnoxious reporter would have one believe – but some are bargaining chips of different sorts.

Deus Ex Universe: Childrens Crusade is setting up to be a cool adventure in the Deus Ex timeline, leading up to the events of Deus Ex: Mankind Divided this summer. The story is taking themes of prejudice and neutrality in some interesting directions, even in this first issue, and we can’t wait to see more. 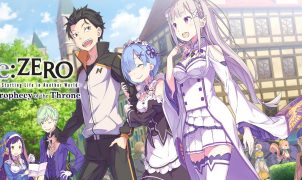