I wish you’d step back from that ledge, my friend.

In sitting down to talk about the second episode of Life is Strange, I had to reflect on my own feelings quite a bit. Out of Time is, despite all its incredible emotional strengths, one of my two least favorite episodes of Life is Strange, a fact which I found harder to deal with than expected. The episode’s narrative power is as strong as any of them, but I had to keep ignoring the flaws in its sometimes-tedious gameplay in order to keep focused. Out of Time muddles itself, and I’m trying to figure out if there’s a deeper point to that muddlement. More on that later, though. Outside of the climactic turbine of the life of Kate Marsh, episode 2 is really more buildup than anything.

In retrospect, the opening scenes of episode 2 should really have warned more about what was coming later in the episode. It does show what deep emotional and psychological trouble Kate Marsh is in, though. Like I said last time, one of my highest priorities in this playthrough was to keep her alive, after the regret I was made to feel by failing my first time. I wanted to see her live, and to see what small but significant role she might play if left alive. Small but significant seems like an apt description of Kate’s personality, now that I think about it. 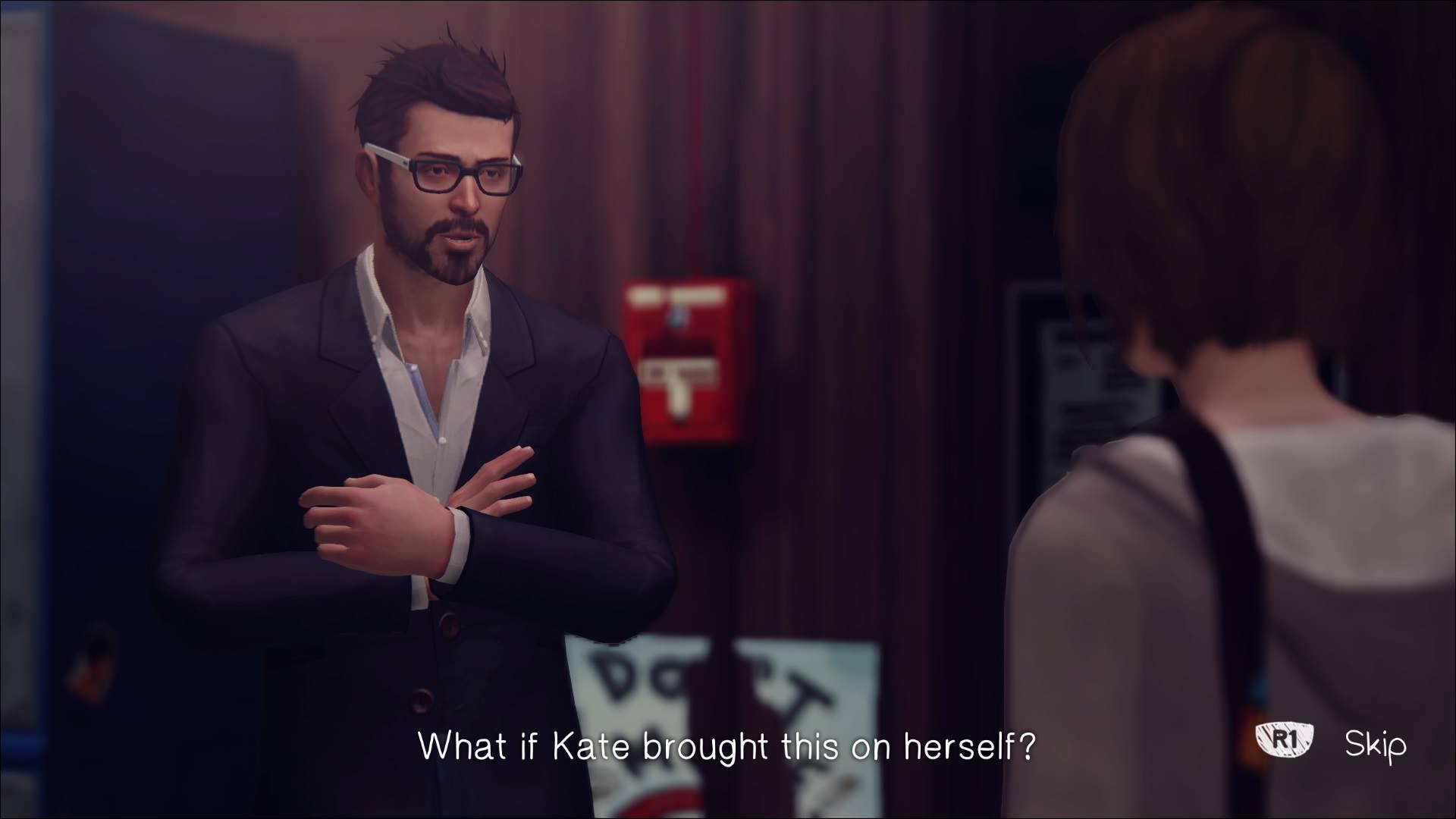 So, determined as I was to be supportive, I told Kate to go to the police. This has always been a strange choice to me because it seems to be a split between what Kate honestly needs to hear, and what she actually wants to hear. I told her the latter. Going to the police to talk about a Prescott drugging and assaulting you, in the town that the Prescotts essentially own, is a decision I will most likely come to regret. This, though, is part of why I made sure not to pin blame for the fire alarm on Nathan in the first episode. There’s this complex game surrounding when and when not to blame Nathan Prescott for things, both now and in the future. My goal here was to get him mad at me only for things that wouldn’t lead him to suspect I knew anything about the gun incident, or his connection to Chloe.

Speaking of Chloe, I want to throw something out here. I think that Chloe Price’s role in Life is Strange is complex – something that can be easily agreed upon by anyone who has played the whole game – but not just in the sense of being a multi-faceted plot device. Chloe is obviously very dear to Max, and fills a couple different roles as both her sidekick and her friend. However, I propose that she is also written to act as a certain kind of antagonist. This first surfaces a little later in this very episode, in the Two Whales diner. After catching hell from Chloe’s mother for taking responsibility for the joint in the house in episode 1, I got to take some face time with everyone’s favorite cobalt-scalped delinquent. We fooled around with time and predicted some stuff, having the fairly innocent fun that really makes the pair enjoyable in these early chapters of the game. Once it was time to leave, I was presented by a major in the form of a call from the troubled Kate. I answered, and incured a whole riot act from Chloe, instantly acting like I had just burned her truck down because I took 10 seconds to pay attention to someone other than her. 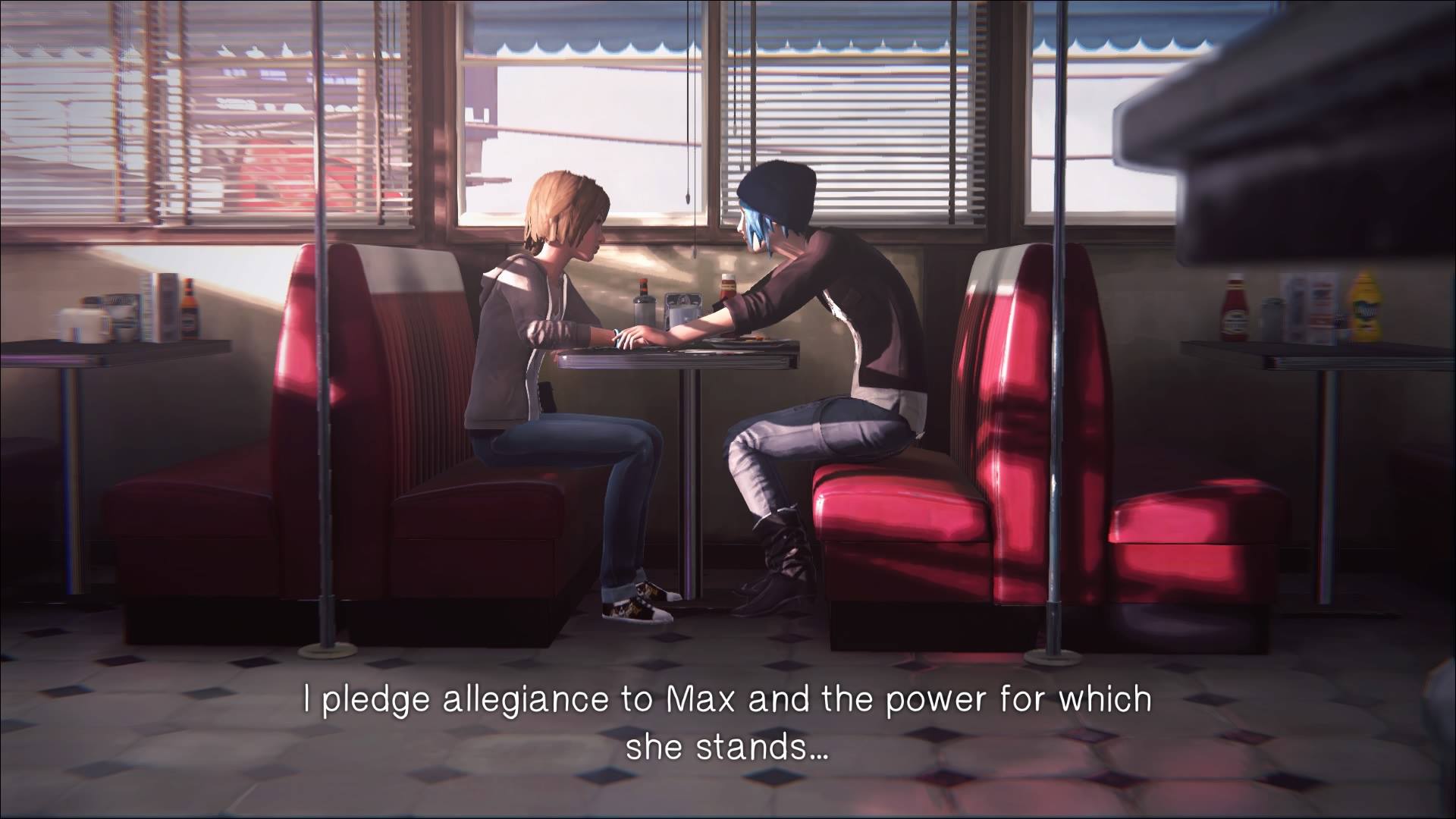 Now, here’s the thing about this. In the first episode (in a line I had honestly forgotten about until my second playthrough), Chloe reveals that she actually knows Kate, and enjoys her company. Kate Marsh isn’t some random figure threatening her friendship with Max; if that were the case, while still shitty, her actions would be a little more understandable as a reaction of simple human jealousy. But Chloe has some context for what’s going on with Kate, and some idea of what she’s going through, and yet she still instantly treats the girl as an inconvenience and potential social threat. The fact that Chloe is so quickly able to see Kate as a social threat tells something about her character that we don’t see in quite the same way. It doesn’t make her a horrible person – I guarantee we all know, or are, people who have succumbed to emotions like there – but it puts her in a position of antagonization towards Max that surprised me even more the second time around. I have some ideas of where this whole Chloe-as-enemy phenomenon might pop up again. We will see.

Let’s fast forward a bit more. The two friends played in the junkyard, a process which includes the infamous “find 5 glass bottles” puzzle that stands as one of episode 2’s prime low points. Chloe nearly got hit by a train, but then manages to not get hit by a train. Good job, Chloe. On returning to Blackwell, I knew it was nearly time for the emotionally explosive finale. Before that, though, came a somewhat alarming scene that I had honestly forgotten about (an amnesiac theme which I am well aware of, I assure you). After visiting Warren, a character who I have now realized I haven’t talked about much in this series yet, I found Kate Marsh in distress, talking to a somewhat grim Mark Jefferson. Kate storms off in tears, recoiling from the conversation I mostly missed, and Jefferson stops me on my way into the classroom. He asks Max what she knows about Kate’s situation, and then says something that would be disturbing to anyone unfamiliar to his true motives, but doubly so to those who do. He suggests that it’s Kate’s own fault that she is being harassed and mocked across the whole school, and implies that he thinks she somehow deserved it. I took the option to bring up Rachael Amber in conversation, curious whether the mention of her name would trigger any sort of unusual response from him. He says “Rachael was nothing like Kate,” a line which could refer to not just general attitude, but something much more similar; how they behaved and were used in the Dark Room. It’s another dark, subtle hint of all that is to come. 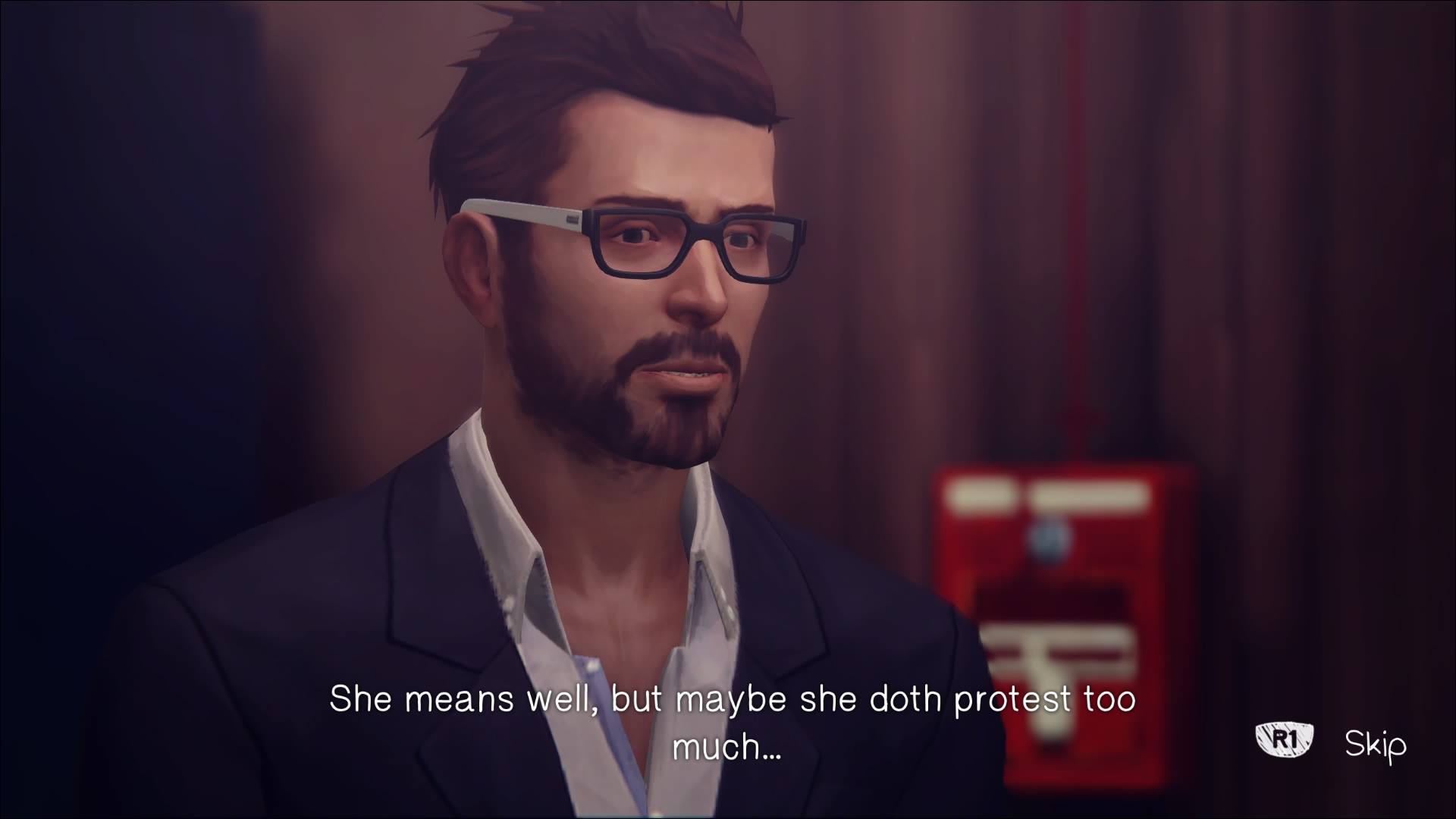 With that unsettling encounter of the Jeffersonian kind out of the way, it wasn’t long before the crowds assembled in horror to see Kate stand at the rooftop of the dorm. Time froze, but Max did not. I made it inside (noticing the nice touch of David Madsen, frozen in mid-dash for the door), and got to the friend who needed to be saved. We started talking, and already I realized things were going a little bit easier than I remembered them. As we talked, I recalled that I had told her not to go to the police the first time, nor had I answered her call. This time, being the better friend paid off in more than just the allegiance of someone important. It paid off in the saving of a life. I was successful, and Kate was safe. 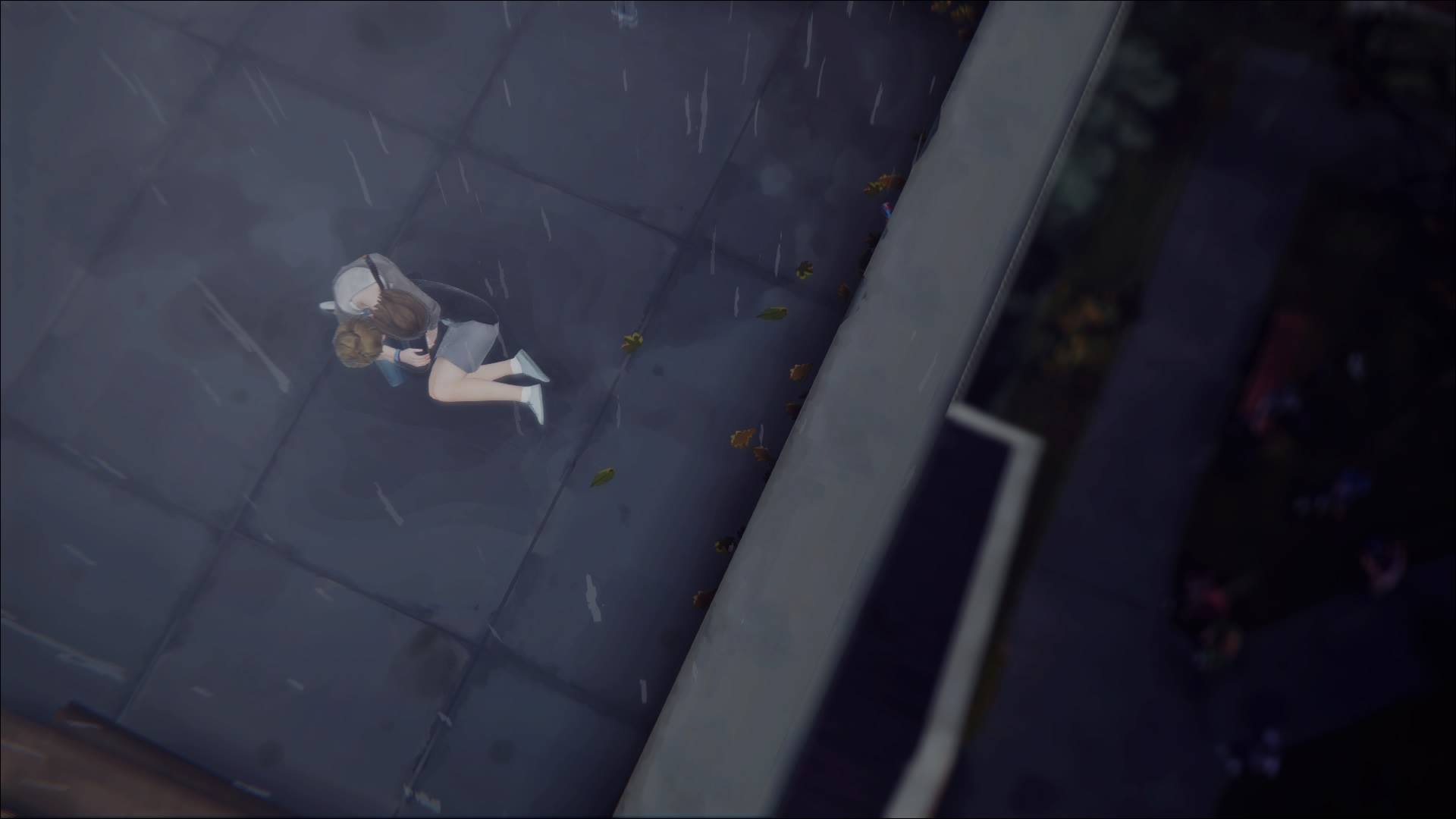 One last thing of note happened right after this scene. Up to this point in my second adventure in Weird Time, I had been conflicted over how to handle the knowledge of Mark Jefferson’s true nature. I knew that I couldn’t go around pointing fingers, mostly because the game wouldn’t let me. Even if I could, though, who would believe me? Who would believe that Mark Jefferson is a dangerous, unstable, murderous sociopath? As such, I had not intended to blame him when it came to the three-pronged final choice that episode 2 presents. Blaming David Madsen was out, because I had already decided to minimize the shit that poor guy would be dealt. Prescott, then, seemed like the obvious choice, but something bothered me. The inexcusable logic Jefferson spat during the conversation in the hall stuck with me, and simply wouldn’t go away no matter what I did. And so, against my better judgment, I blamed the secret mastermind who was truly responsible for Kate’s suicide attempt, along with a long list of other inexcusable crimes. To my surprise, he took the blame well and responsibly; working hard to hide the truth, as usual. 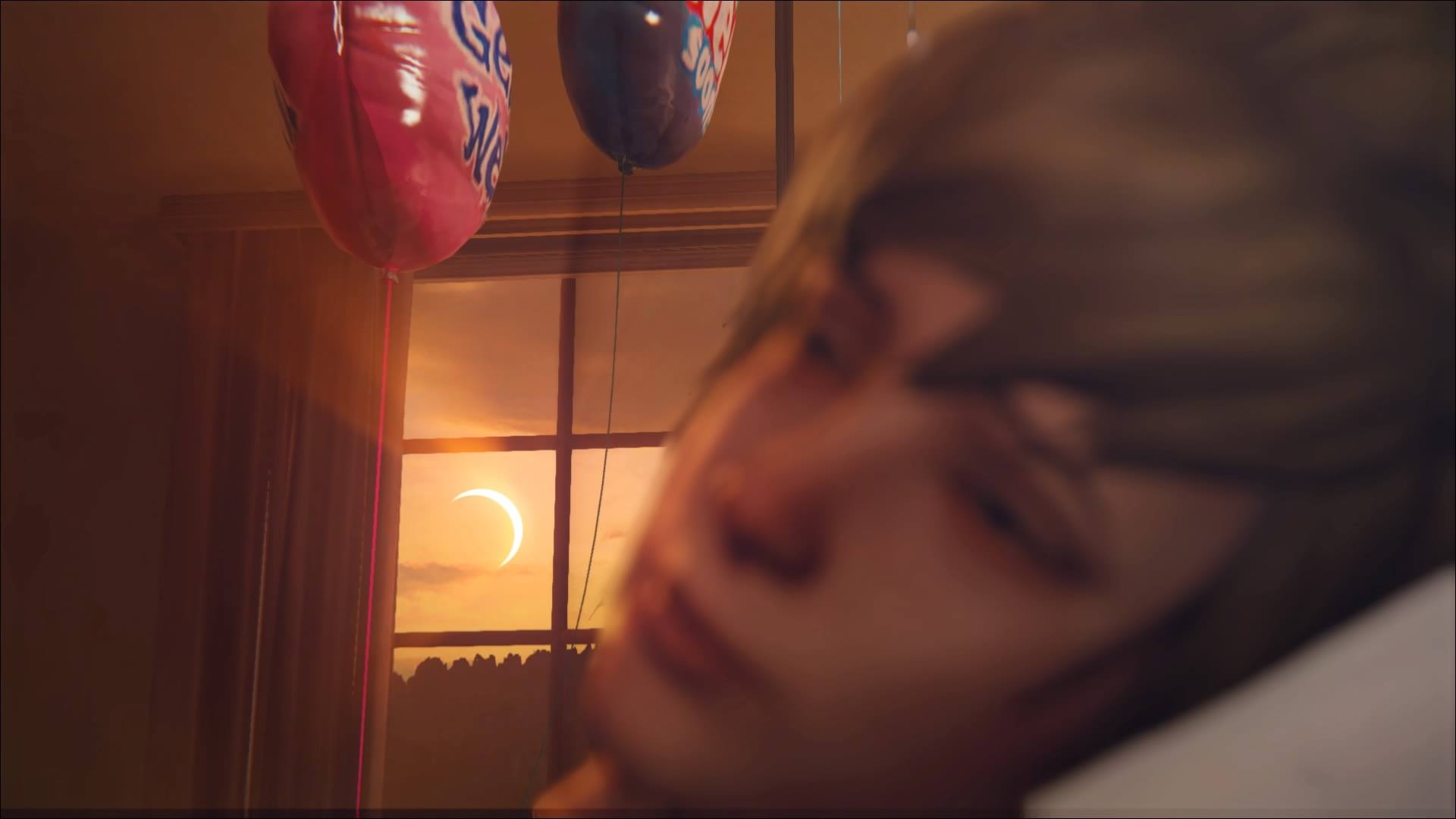 Episode 2 is kind of just “okay” when you strip away the emotional rollercoaster of Kate Marsh. It was comforting seeing her lit by the sunset hitting her hospital bed in the closing moments of the episode, and it’s nice to know that now we can move onto other things. Next episode, it’s time to dive deeper into the true power of time-fuckery as things get unhinged and we take a closer look at Chloe’s side of things in episode 3! 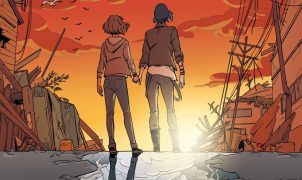 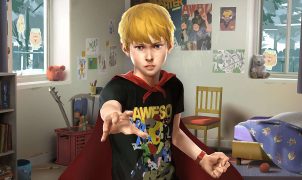 The Awesome Adventures of Captain Spirit Arrives On Xbox One, PS4, and PC Today