Uninvited guests are seriously the worst; good thing there’s a guy that you can call for that sort of thing

Imagine a future in which aliens have most definitely been confirmed to exist. That probably isn’t too difficult for most people to do. Now take it one step further, and imagine if said aliens did not only exist on their own planets, but also chose to come mingle with humans. For the sake of this example, let’s say that this co-existence had nothing to do with any sort of nasty hostile takeover. Rather, aliens species have come to us asking if it’s cool if they crash on Earth for a while. You would hope that, by working things out in a civilized manner, interactions between the species would go pretty smoothly overall. Unfortunately, that isn’t the case. In fact, humanity has learned that aliens are nothing but a bunch of dicks. Children are being abducted from playgrounds, and you can’t so much as go by groceries without ending up on the fleeing end of some sort of life-and-death case. Things are looking pretty grim for humans, with alien mischief running rampant, but fortunately we have an ace in the hole. You see, there’s a guy that you can call if you find yourself neck-deep in alien-related problems (or just neck-deep inside of an alien’s mouth as it’s trying to swallow you while), and we call that guy the Bug Butcher. 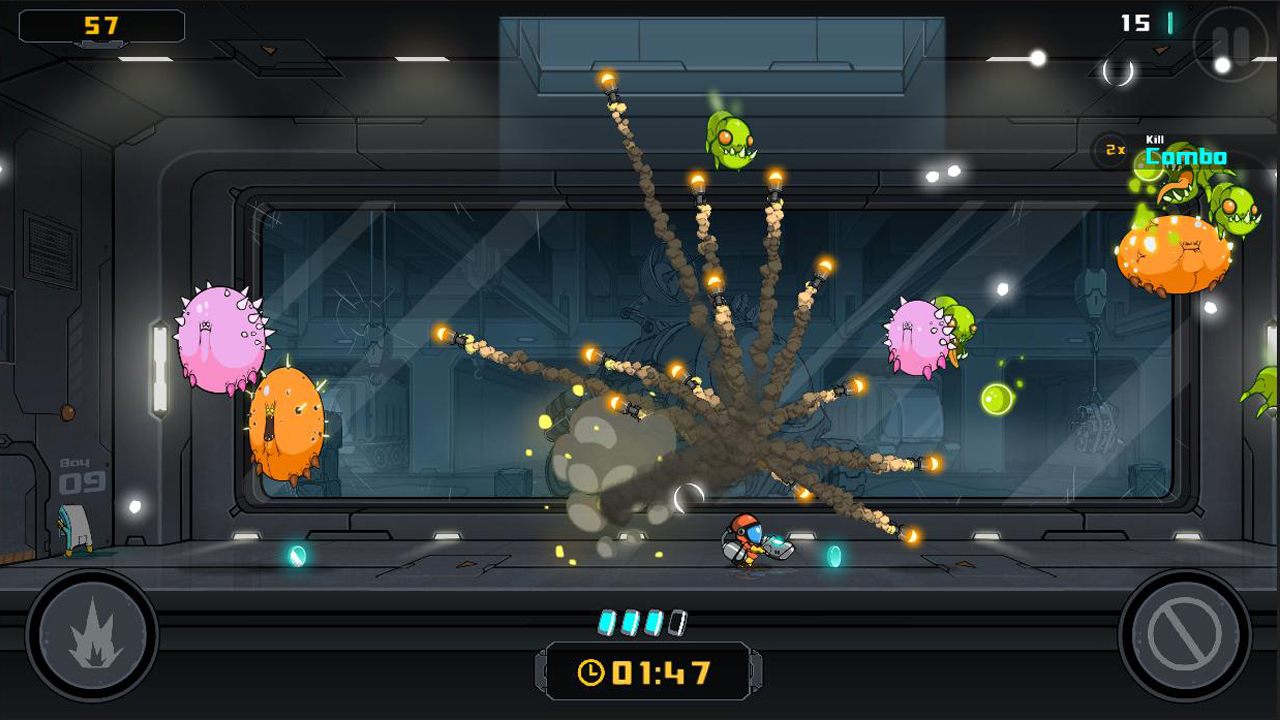 The Bug Butcher is a frantic and face-paced arcade-style shoot-em-up game, and a modern-day nod to games such as Super Pang and Buster Brothers. Players take control of the fearless and outspoken alien exterminator Harry, a.k.a. the “Bug Butcher”, as he begins his latest job; clearing out a plethora of alien pests from a relatively important-looking research facility. Each level is comprised of a single room, and tasks players with the job of fending off oncoming alien swarms. As aforementioned, this gameplay mimics the style of classic games such as Super Ping and Buster Brothers. For those not in the know, this means that things may work a bit differently than one may first think.

There is but one mechanic in The Bug Butcher that players need to keep in mind at all times; Harry can only shoot upwards. While players may freely move Harry, and even sprint short distances, right and left at all times, at no time will Harry shoot in any direction other than straight up. This means that Harry can only hit aliens that are above him. Fortunately for Harry, aliens all seem to love bouncing, jumping, crawling on the ceiling, or flying which means that everything will inevitably become a target with the correct timing, skill, and patience. While that may not sound too bad, every alien type has its own unique form of movement that and some aliens even go on the offensive! Most aliens also do not simply vanish when killed; they split into smaller versions of themselves. This means that players need not only be fast and accurate, but intelligent as well. Constantly shooting at whatever is close by rather than targeting specific enemies could result filling a room up with so many tiny aliens that there’s no safe place to stand! 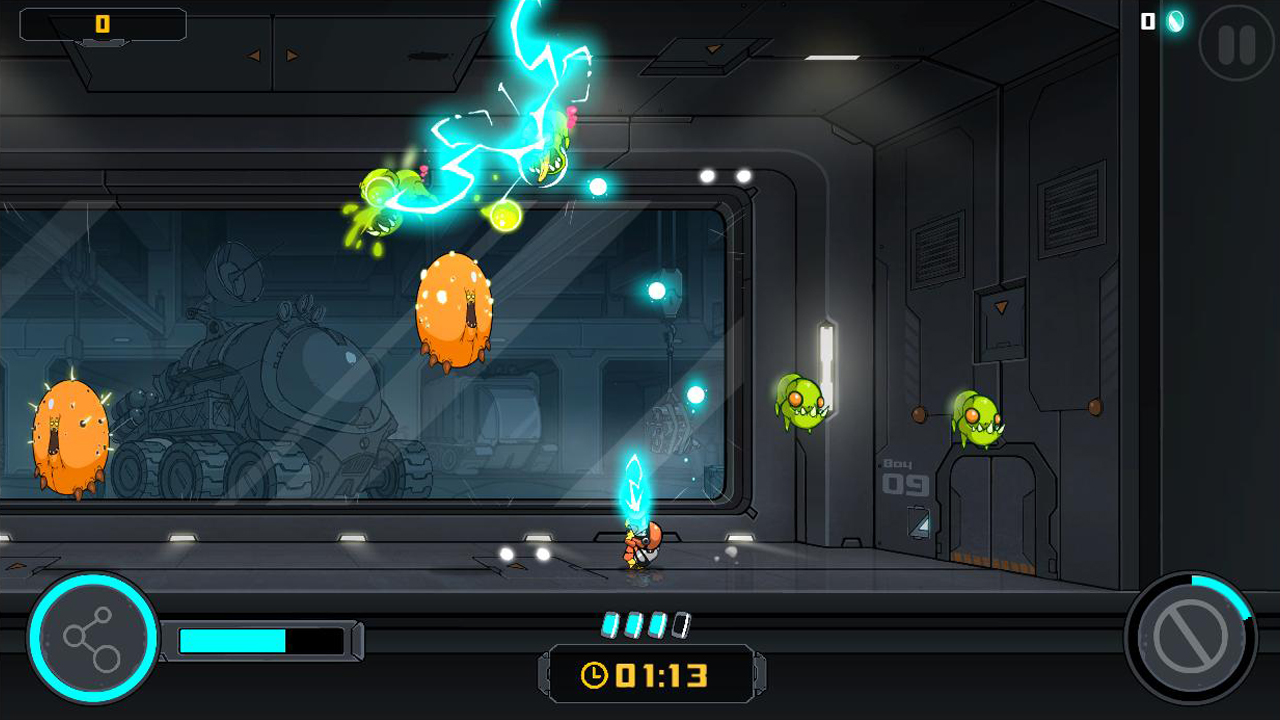 It’s pretty easy to make a mistake and find yourself overwhelmed by the sheer number of enemies present at one time. Fortunately, there is still a pretty good chance that you will not be down and out due to the cornucopia of power-ups, such as laser guns, rocket launchers and fire rate-boosting globs of goo, that make themselves present throughout the progression of each level. Harry himself also has a set of special attacks and abilities, which of course is charged up by annihilating those who stand before him. Once the meter is charged up, players can trigger one of Harry’s specials which include the ability to move quickly while also being invincible, freezing everything in the room, and shooting an unbelievable amount of missiles from… hey, where DID those missiles come from? How does he carry around all of this stuff?

The Bug Butcher is a hectic, high-energy battle of life-and-death, and the already-enjoyable craziness within each level would be even more enjoyable if it had a soundtrack to match. Fortunately, it does! While relatively short in number of actual tracks, the energetic, electronica-esque soundtrack present within The Bug Butcher is incredibly pleasing to listen to, and serves to better enhance the overall experience of gameplay, and never seems to become dull.

The graphics are also charming in their own right. The goofy simplicity of the human characters combined with the alien artwork that’s one part funny, one part threatening, and has an occasional (and very fitting) amount if gross thrown in gives it a similar feel to the graphical style found within games such as Castle Crashers.

The Bug Butcher is a very appealing game overall. The number of actual levels is a bit short and, in my opinion, weapons can become maxed out a bit too soon, but those are really the only two downsides to the game. The levels are all well-designed and incredibly fun and the three difficulty levels plus the online leaderboards give the game a huge amount of replay value and also does a nice job of not scaring off newer or more inexperienced players. To put it simply, I would definitely recommend checking out this arcade-style hit.

Full disclosure: This review was written based on review code supplied by the game’s publisher Awfully Nice Studios. 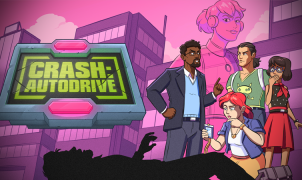