Xenoblade Chronicles X goes places even the Monado could not have predicted. Aw jeez, who blew up planet Earth? Seriously, this mess is going to take forever to clean up. Globe-scale storylines are nothing new for the universe (multiverse?) of Xenoblade Chronicles, a series which began with a world quite literally built on the backs of giants. Xenoblade Chronicles X sends a doomed humanity across the stars to a new home, dealing with alien lifeforms both harmless and hostile, intelligent and…well, not that. Xenoblade Chronicles X continues the series theme of people making their own destinies, this time in the lush and vast world of the planet Mira.

After Earth is destroyed in what seems to be the crossfire between two warring alien races, a series of colony ships set to the stars to find a new home. One of those same alien races was sent to do clean-up duty (or so the game’s setup implies, anyway), and shot down the White Whale, a United States Ark ship carrying the “New Los Angeles” colony. The ship is obliterated, but the colony detaches and drops into the sea of the planet below. The planet is Mira; harsh and volatile, but livable. Once the dust and ash have settled, it’s time for the human race to lay claim to its new home. The only problem is that they aren’t the only ones shacking up there.

Enter the player character; a nameless, customizable avatar taking the place of central character Shulk from Xenoblade Chronicles. The player is awakened from a stasis tube found far from the central crash site, about two months after the White Whale made its explosive landing. The person responsible for the player’s rescue is Elma, an adept and responsible soldier who takes the player under her wing and brings them back to New Los Angeles. Elma helps players get acclimated to combat on their way back to the colony. Along the way, Elma introduces players to Xenoblade Chronicles X’s two biggest strengths: the aforementioned combat, and the world.

Combat in Xenoblade Chronicles X is fast-paced and complex. Everything operates in real-time, with characters locking on to enemies to do auto-attack damage, switching between melee and ranged weapons at the push of a button. The player only controls the avatar character, but can sync up attacks with other party members. A bar of special attacks of various types is nestled in the bottom of the screen, ranging from powerful melee and ranged attacks to buffs and debuffs, all interlocking as parts of a system that provides potential for endless different combinations. Sometimes during battle, a party member will ask to use a certain kind of attack in tandem with you. Sync up, and extra damage is yours for the dealing.

If that sounded like a lot of information at once, that’s because it is; and one thing Xenoblade Chronicles X doesn’t do is hold your hand. Players unfamiliar with the original Xenoblade Chronicles may take some time to really come to terms with the way combat works, and may very well get frustrated when new ideas like character classes and weapon variations are thrown in as quickly as they are. Given some time, though, everything falls into place. The class tree offers three base class choices, each with two variants that have two more powerful versions of their own. Each of these has its own distinct sets of moves for battle, and all have their uses and are assembled intelligently. What’s more, each new class you try will get more powerful, and unlock more attacks, the longer it is used.

It’s impossible to talk about Xenoblade Chronicles X without discussing planet Mira itself. The alien planet is split into five continents, each sporting distinct elements while not feeling completely segmented from the others. When running through the mountains and fields of Primorida for the first time, I was immediately struck by just how much lay before me, in both landscape and wildlife alike. Level 2 creatures  live peacefully alongside towering level 80 behemoths. Some of the giant, extremely powerful creatures surrounding humanity are hostile, but many won’t attack unless provoked. There’s something about seeing a creature that size that instantly makes one want to get strong enough to take it down.

Becoming strong enough to take down the biggest and baddest enemies Mira has to offer is no easy feat, and certainly not one that should be taken without help. Gundam-like Skell units, giant robots with firepower to spare, can be unlocked at about 30 hours into the game. While this wait may sound endless, it actually goes by pretty quickly for the most part, and leads to all the more satisfaction once the player is sitting in the cushy cockpit of a mechanical, flying titan. Skells make traversal easier, opening up travel to the two continents not connected to Primordia and New Los Angeles. Skells also change the way the player views the game world, as everything changes from a “human-sized” scope to a far more bombastic “Skell-sized” one. Skells actually reveal a lot of very clever design choices that went into the five continents of Mira, accommodating travel and combat by Skell in a way that feels just as engaging as going at it on foot. Yes, they’re all bigger than they look. Individually and collectively. Have fun.

The way the Skells are presented as these giant anime fever dream mecha works really well, but that isn’t to say that the rest of Xenoblade Chronicles X‘s presentation is nearly so flawless. Some cutscenes do a fine job with camerawork and direction, creating little bits of cinematic experience in the adventure. Other times, actual cutscenes are absent, made up for by the in-game character models standing around exchanging voiced dialogue, still in-game with hud at the ready. In addition, the voices used to bring characters to life are extremely hit-or miss. The avatar character boasts a variety of different A-list actors to choose from, such as Yuri Lowenthall, Bryce Papenbrook, Kira Buckland, and Erin Fitzgerald. These voice talents are honestly put to something of a waste, as the only times the avatar speaks are during combat, their only presence during cutscenes being nods and gestures. This completely disengages them from the plot, making them cease to feel like a part of the story they are supposed to represent the player in.

Voice actors aside, the story itself is not without merit. Xenoblade Chronicles X may not start off with quite as unique a hook as the game before it, but given time, its plot becomes less and less predictable. Nothing is quite what it seems; not Mira, not the aliens that clashed above Earth, and not any of the characters within the story. Some characters remain dry or otherwise trope-y, and not in quite the ultimately charming way that was pulled off by the cast of the first Xenoblade. The story is presented at a good pace, though, always giving just enough to keep the player interested; given a little bit of patience, at least. Who needs dialogue when you have GIANT ROBOTS???

The best that can be said about the world of Xenoblade Chronicles X is that exploring it is just plain fun. I actually got familiar vibes of what made me love Far Cry 3 so much a couple years ago, as Xenoblade generates that same feeling of satisfaction and conquest as the five continents of Mira are uncovered, one by one. A variety of sidequests add more reasons to sniff through every nook and cranny from Primordia to Sylvalium, and everywhere else in between. Some quests are a little mundane (collect X number of randomly generated items), but can be handled with ease by simply being set to “active” while the player takes on far more interesting missions. The one negative to exploration is really specific; all the text is really small. The game’s HUD is so cluttered with little lines of text that things can be very hard to comprehend visually sometimes, even on a 40-inch 1080P screen (my personal setup). It doesn’t break the game, but could be irritating to players who suffer from issues with eyesight. “What’s that? I can’t hear you over these TEN MILLION THINGS”

Xenoblade Chronicles X gets ambitious in the destiny it attempts to forge. Is it successful? Sometimes. The battle system birthed by its predecessor is perfected beautifully, and gets only more satisfying as the game goes on. Its world is staggering in size and scale, and is a lot of fun to explore. The game suffers from an awkwardly-presented story, and a HUD that appears to be trying to do too many things at once. It’s not for the most casual of gamers, but Xenoblade Chronicles X is the perfect experience for the Wii U owner who just wants a world to get lost in. Just watch out for the huge howler monkeys and dinosaurs as you go. 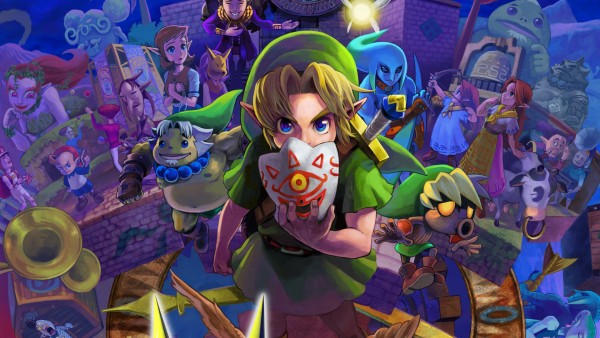