Collectible toy manufacturer NECA today announced the latest in their series of retro gaming-themed figures. Having previously tackled LJN’s Friday the 13th and Nightmare on Elm Street NES titles, along with the Nintendo and Master System versions of the iconic ’80s stars Robocop and Rocky, now the manufacturer has announced plans to release figures based on Konami’s classic run-‘n-gun series, Contra.

The pair of 7″ figures showcase Contra’s main alien-busting protagonists Pfc. Bill Rizer and Pfc. Lance Bean, and come packaged in a glossy silver package similar to that of the original Nintendo Entertainment System game. Among the accessories included with the figures are the iconic “Red Falcon” emblazoned power up and a wicked Spread Shot effect bursting from the barrel of the hero’s trusty assault rifle.

NECA plans to open pre-orders for the figures soon, and we’ll keep you posted as soon as they do.

Check out the full-sized pictures in the gallery below: 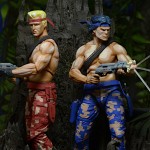 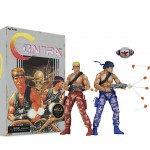 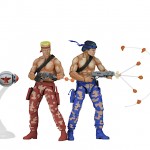