A Traditional RTS with a Side of Mad Science

Impossible Creatures is a game with an interesting history, and yet it may quite possibly be a title you’ve never heard of until now. I certainly had no idea of the game’s existence until I was tasked to review it, but I was intrigued once I began reading up on it. Way back in 2002, Valve was in the process of demoing its then-prototype Steam platform. Part of the plan was using a title by Relic Entertainment and Microsoft Studios called Impossible Creatures to showcase Steam’s capabilities as a digital PC gaming distribution service. Though Impossible Creatures was warmly received by those testing out the game via Steam and afterwards when it was released on PC, it never saw the light of day on Steam itself, until now. 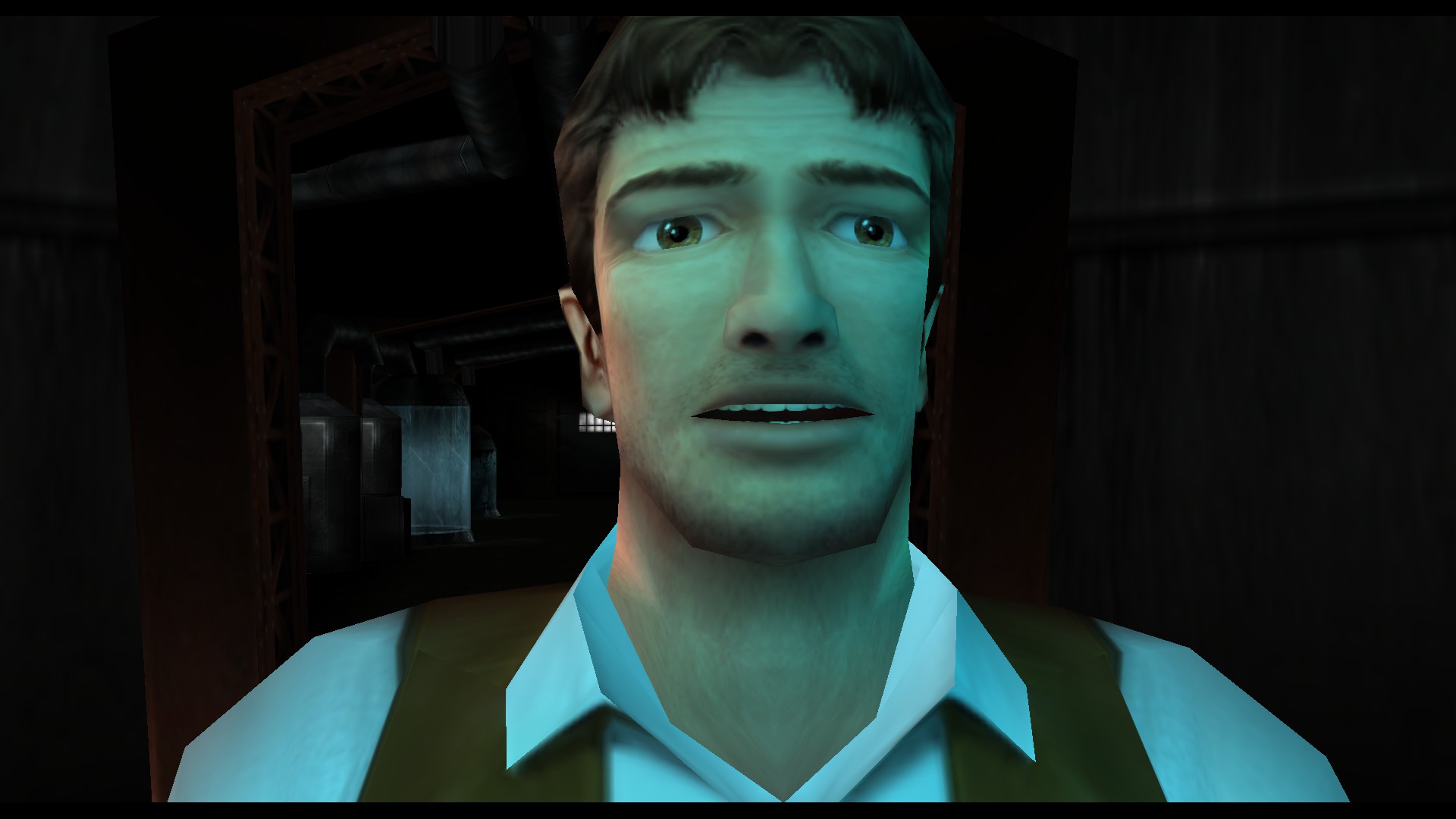 The narrative of Impossible Creatures’ single player campaign is set along the lines of a Sci-Fi B-Movie and serves as more or less of a backdrop supporting the core game mechanics. Set in 1937, players assume the role of Rex Chance, an ex-war reporter who receives a letter from his estranged father who also happens to be a brilliant scientist. Rex’s father, Dr. Eric Chanikov, urges him to come see him on a remote chain of islands in the South Pacific he resides on. Dr. Chanikov fear his life and research into what’s known as Sigma Technology is at risk of being taken by the nefarious tycoon Upton Julius, and he wants to discuss the true nature of his work with Rex before his time comes to an end. Upon arriving at the islands, Rex finds his father is nowhere to be found, and is suddenly attacked by an army of mutant creatures led by Upton Julius. Rex narrowly escapes with the help of his father’s assistant, Dr. Lucy Willing, and they must now work together to solve the mysteries of the Sigma Technology as well as unraveling Rex’s family history. Along the way they’ll need to go up against Upton Julius and his cohorts, so this obviously won’t be easy. 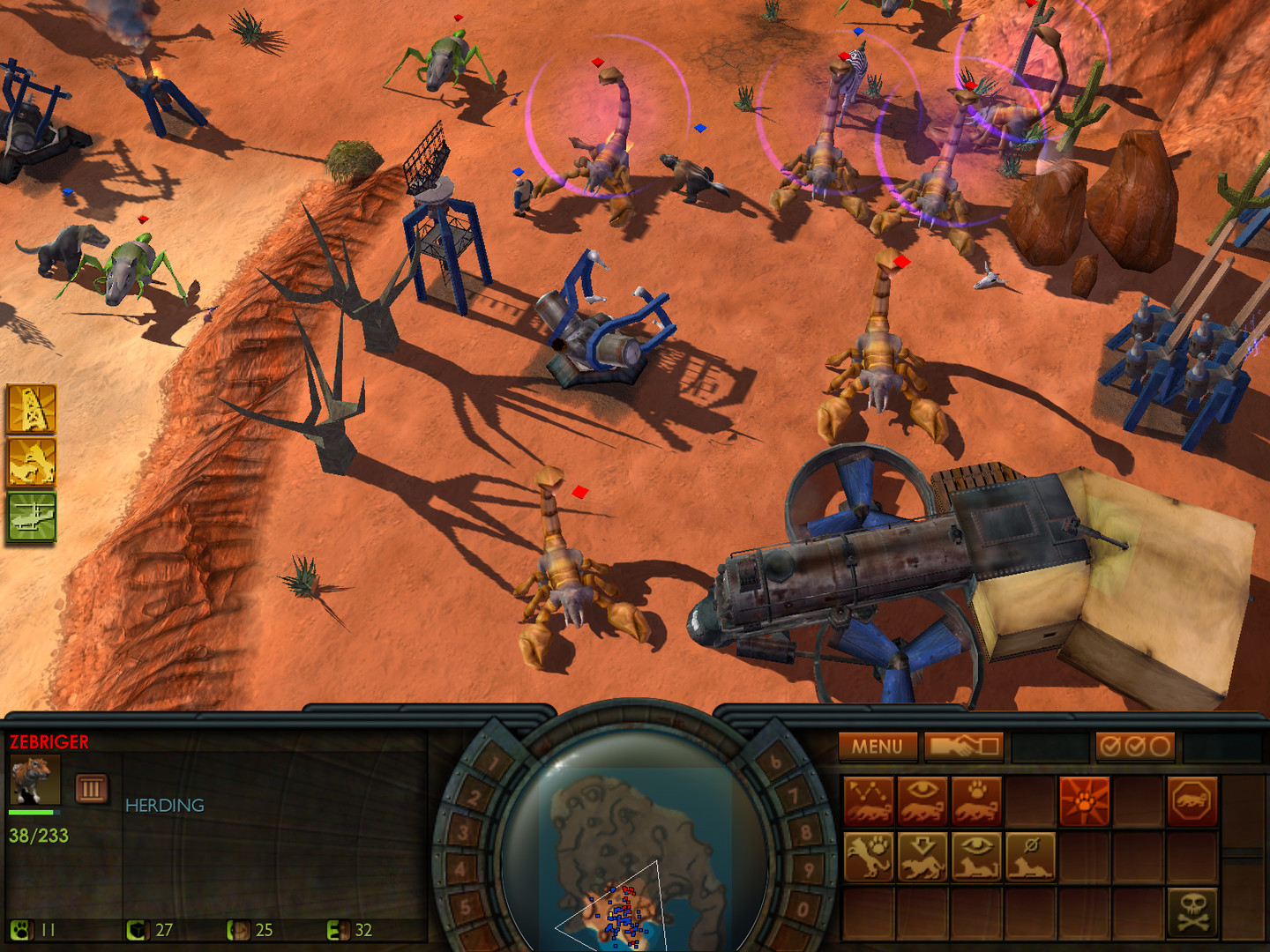 On the surface, Impossible Creatures comes across as a by-the-numbers Real Time Strategy game, much like well-known titles like Starcraft and Warcraft. Players have a home base where they can produce grunts, grunts collect resources and build structures for you, structures are used to create or upgrade units, and your armies take out your opponents’ bases. However, what sets this game apart from other RTS games is how your armies are produced. Players don’t have set units that they can choose to build, instead they are tasked with mixing together pairs of animals in a Dr. Moreau fashion to create seemingly endless combinations of nightmarish creatures to do battle for them. Feel like making a badger crossed with an eel? A tarantula crossed with a great white shark or perhaps a moose mixed with a walrus? The world is your oyster when it comes to Impossible Creature’s creature creation. 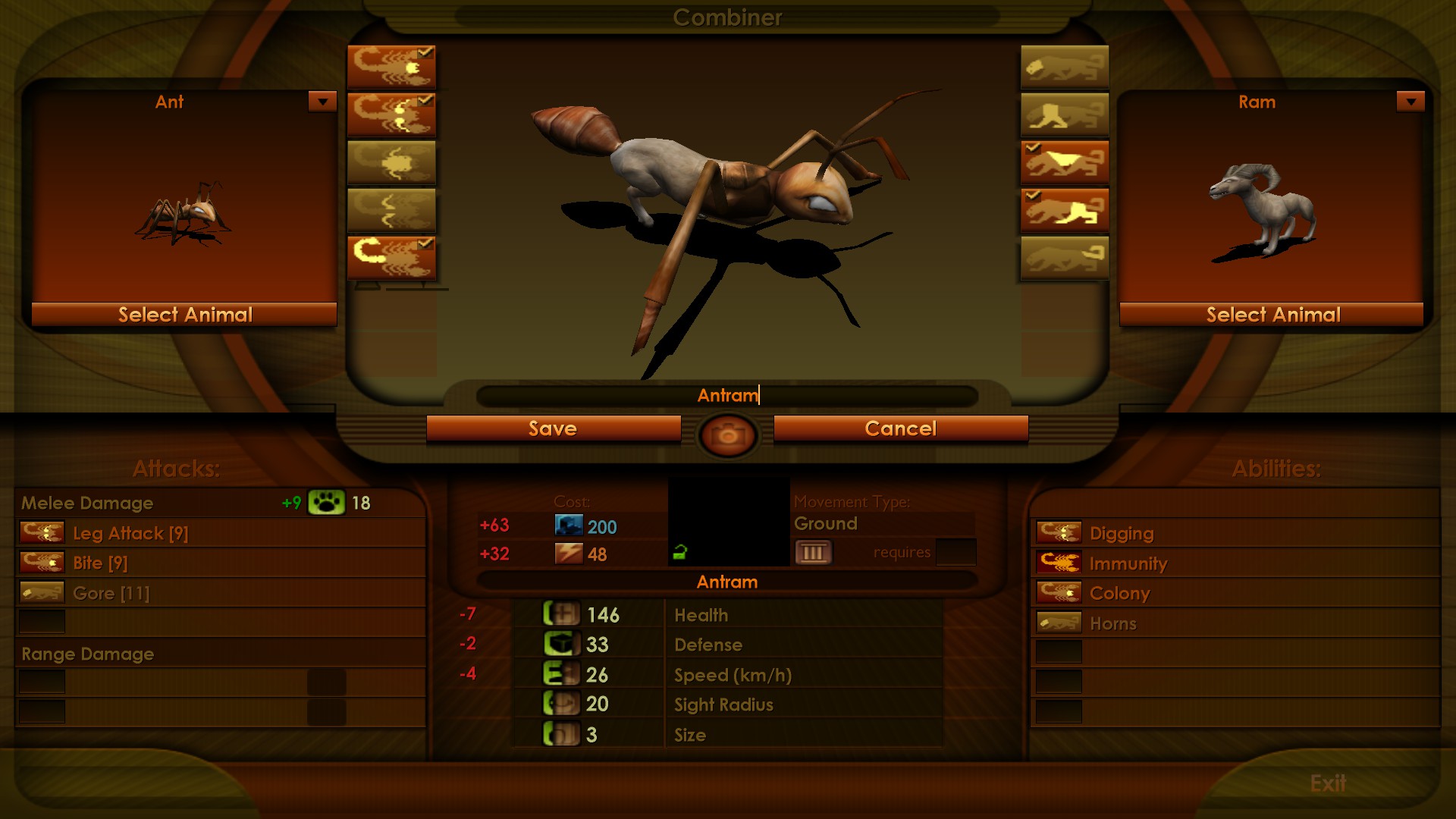 Mixing together creatures isn’t simply based on aesthetics. Combining together different animals results not only in different statistics, but also different latent and special abilities. The amount of strategy required to get the most out of your units is actually quite deep despite the silly premise of the game. Heads, torsos, front and rear legs, and even tails can be swapped between the two creatures you’re mixing together, and each part has different stats attached to it. If you want to stand up to either Upton and his goons or the real-life opponents you’ll face online, you’ll want to pick and choose your creature’s features carefully (the preceding rhyme was absolutely 100% intentional).

The Steam release of Impossible Creatures, ported by Nordic Games, includes the base game, which includes the original single player and multiplayer campaigns, and 51 creatures at your disposal (although these need to be unlocked in the single player campaign as you play) to build armies with. Also included are all patches and DLC released previously for the PC release, which increases the creature count to 76 for even more army building options. System optimization has also been improved for the Steam release, and Mod tools are provided as well. Steam Workshop support is currently in planning stages. 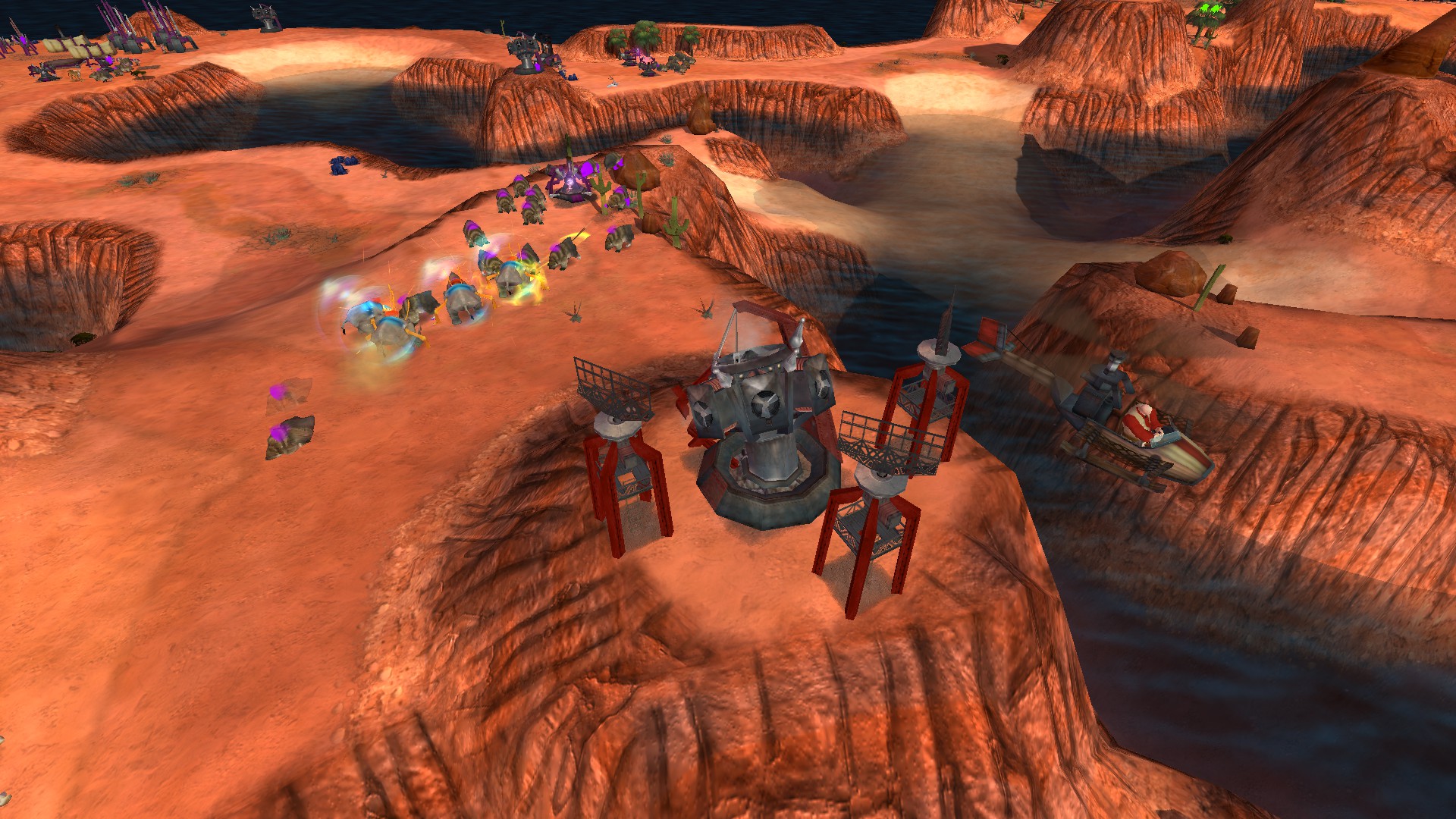 My time spent with Impossible Creatures mostly resided within the single player campaign, and for the most part was a refreshing trip back to the earlier days of PC gaming. The controls are intuitive, the user interface makes sense, the graphics are understandably outdated, but still do their job, and hotkeys are plentiful and customizable for easier army management. I also enjoyed that creature upgrades were lightning fast. Many upgrades can be done within the span of 60 to 90 seconds, which is a plus from what felt like an eternity some upgrades seemed to take in titles like Starcraft.

While I did have a good time with Impossible Creatures for the most part, there are some qualms I have with the game that truly prevented me from enjoying it as I felt I should. While the dialogue can be campy and add to the B-Movie flavor the game has, some voices can be a little grating, and some lines groan inducing. Also adding on to the sound problem are the voice bits, which play far, far too often. I heard “OUR CRITTERS ARE UNDER ATTACK” every five seconds when my armies were facing off against other creatures, even if they were smack dab in the middle of my screen. It was annoying enough to make me want to turn off the voices entirely.

Another problem I had with the game was how combat flowed. Though the controls were easy enough to utilize and move my units, when it came to taking down creatures and especially structures things moved painfully slow. I could have a horde of monsters on hand, and with all of them blitzing a building it would take somewhere in the neighborhood of 90 seconds to take out that single building. This made assaulting a base feel more like a waiting game than it should.

Still, even with its problems Impossible Creatures is an interesting piece of gaming history that should hold the interest of most PC Gamers. While I certainly wouldn’t recommend it to everyone, I would recommend it to devoted RTS fans, and perhaps those looking to have a good time concocting the weirdest creations they can come up with and having a laugh naming them.

Full disclosure: This review is based on a review code provided by Impossible Creatures’ publisher, Nordic Games.