Victorian England. If there was a flavor for this general era and time, it would be vanilla. High society. Silly clothes. Inscrutable traditions and manners, complete with five-cent words and impeccable grammar and diction. Who wants anything to do with Victorian England? Well, while the clothing styles and societal norms are arguably bland, the era had a couple things going for it. Men of combat and honor. Burgeoning science. And, of course, occultism and spiritualism beginning to rear its head. But, period pieces generally fall flat for me – there’s nothing about the era we didn’t get from history, right? Well my friends, this is why Steampunk was invented.

What if science was even more explosive? What if there were genuine psychics out there with mystical powers at their command? And what if the stodgy old Empire we knew of Victorian England was only one possible one of many Empires from  parallel realities?

That’s where Mark A. Latham’s The Lazarus Gate comes in.

The time is the year 1890, the place is London, seat of the British Empire. The streets are filled with men of business and shocking poverty, side-by-side in the dirty, fog soaked streets . The industrial revolution is in full swing, the empire booms, and streets once familiar to Captain John Hardwick  of Her Royal Majesty’s Army are now foreign. Trapped in a Burmese prison for several years and chained to an opium addiction, he is returned to the nation of his youth with few friends and scant knowledge of the places he once found familiar. But soon, he finds that there are people who want him in their employ. They need a man toughened by experience and capable enough to do hard tasks for Queen and Country. Contacted by the Apollonian Club and inducted into their ranks, Hardwick is put on a private investigation for them into anarchist bombings and a strange corpse left in London. Further investigations and shocking revelations inform the Apollonian of strangers in their midst, the Othersiders. They come and go through London in secret, bombing random sites and disappearing without a trace using fantastic and occult technology. Their tech is fueled by psychic energies that, while lacking in our worlds, are abundant in the parallel dimension from which they hail. Hardwick is then set to find the anarchists in their midst before they can bring their terrible plot to fruition and lay the empire low. Horror, action, treachery, and adventure all occur as John works his way to the terrible secrets that lay just beyond the surface, leading to a terrible device known only as The Lazarus Gate.

The book is filled to the brim with elements from popular fiction – but the one influence that seems to shine through most for my money is the television series Fringe. Both deal with the interplay of parallel dimensions in addition to the consequences there of. The portals used by Othersiders have terrible effects up to and including accidentally sawing people in half and mashing up counterparts from both sides into terrible conglomerations of both (think Timecop, but even more gross). Another strong influence would seem to be the Warhammer 40K universe, as occultists from the Otherside have a tendency to let beings eascape into their reality that are, for all intents and purposes, demons. Of course there is also great influences from both Victorian and early American writers. Flavors of Sir Arthur Conan Doyle and H.P. Lovecraft abound. Anyone who loves all of the above flavors will find themselves in store for a great deal of enjoyment.

I recommend this book for those who would love to delve into period piece lit but also want to spruce it up with something to offset Victorian tedium. If you’re a fan of Fringe, this should do the trick while changing the scenery to something with cobblestones and gaslights (and of course horrific things beyond the ken of mortal minds).

Full disclosure: This review is based on a review copy provided by Titan Books. 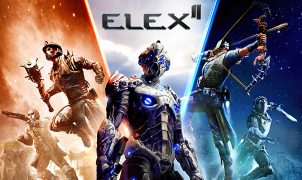 Elex II Review: A Roleplaying Masterclass   Whilst never the most polished or technically sound of experiences, I’ve always had a soft spot for Piranha Bytes’ work. Janky, often…