A Fistful of Gun Review (PC)

Your thumbs are ready, Western Spaghetti 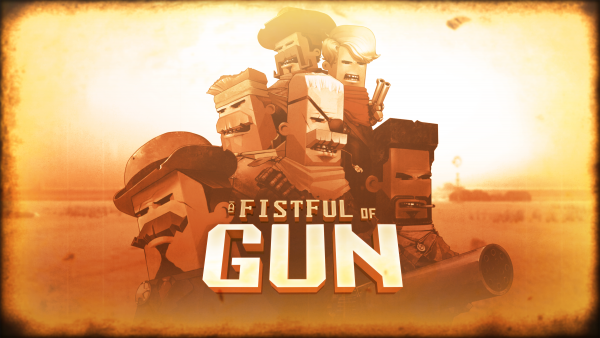 As complex as gaming has become, there’s something incredibly satisfying about a good button masher. Fistful of Gun is a great game for the thirty to forty seconds I stay alive. I never considered what it would be like to review a game I suck at.  Seriously, though, developer FarmerGnome has taken what could have been another arcade style bullet-hell shooter and really stepped up the game. 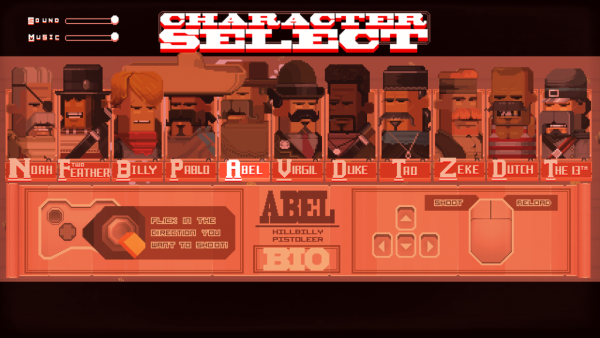 Choose your gunslinger: A Fistful of Gun offers a wide selection of lead-spewing desperados to choose from.

Difficulty aside, Fistful of Gun takes the classic look and sound of coin-ops but throws a mass of players and controls into the mix. The game supports nine players local. I like to picture all nine of them smashed together at one nerd’s computer sharing the same keyboard. The lonely human being I am I opted to play mostly by myself. Somehow the game still managed to be chaos. 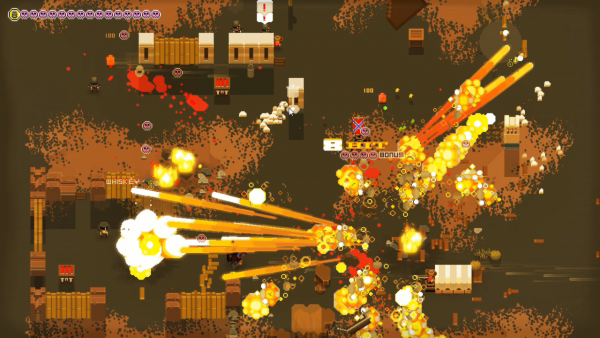 Just another day in the wild, wild west.

Every character has a different gun and control set. With a double-barrel shotgun you have a separate button for each barrel plus another one to reload. The reloading is honestly the weirdest part of Fistful of Gun. The character I liked featured a six-shooter you’d have to reload one bullet at a time which is fine, but the difficulty ramps from the usual dual stick bullet hell I’m used to. In other games I’m just moving the right stick paying little attention to my character, in Fistful of Gun the second my brain relaxed I’d wind up dead. Adjusting to the different control schemes is more taxing than I expected but there’s a rewarding quality about it. It took me a few tries to really find a character I liked, and in the end I found out I liked playing with a keyboard and mouse better than a controller. Using a controller there was no aiming reticle, plus the shots you take are inaccurate as it is. On top of that there’s a dissonance between what you’re trying to shoot and where you’re trying to move your character. It took a few rounds to get adjusted to it but I can say assuredly that you will feel like you’re improving as you practice with whatever character feels the best for you. 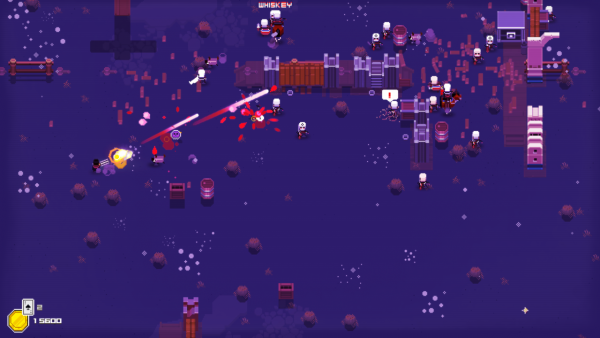 Don’t let the low-fi visuals fool you – A Fistful of Gun packs a punch.

Visually, the game is somewhere in the realm of modern 8-bit and each character looks like a block in a sombrero. The maps are laid out in a flat rectangle barely bigger than the screen you’re playing on. They’re nice and retro but won’t be blowing anyone’s mind. There’s a charm in each character and the archetype they convey but the gameplay outshines any of this. 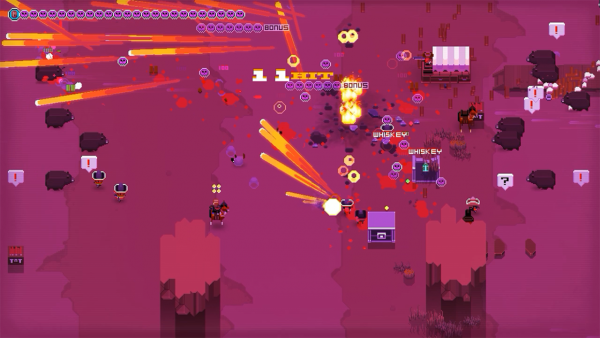 There are several modes to cut your teeth on, as well. Arcade mode is exactly what it sounds like-endless waves of enemies to clear with short breaks and upgrades for each successful clear. My favorite thing about Fistful of Gun, however, was the story mode. There are three acts before the final boss all made up of 13 levels or “miles” between each act. After 13 miles you fight a boss. I won’t spoil it but they’re all pretty ridiculous. The maps are randomly generated and sometimes you’ll be able to go through four or five scenes without having to kill anything, which may not sound exciting but the availability of choice is what’s great. Sometimes when you clear a map you’ll be able to choose what type of interaction you stumble across next. Do you help the townsfolk to the north being stampeded by bears? Head east and try a hand of cards? Follow the stranger through the heavily guarded train tracks with the promise of a shortcut? It’s all up to you and every play through is a little different. The game gives you the option to steal from the nice folks, but I found that when I did that the next scene involved me strapping a pig to my head and barely allowing me to move. 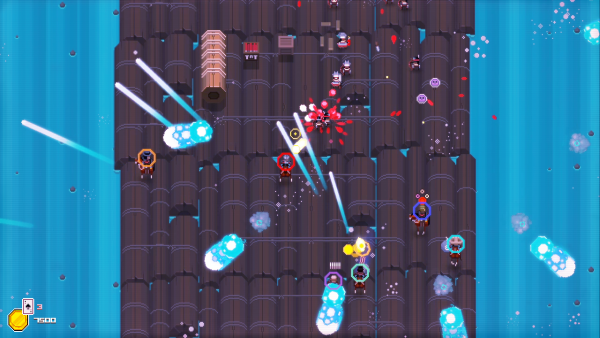 Ever want to unleash your wrath atop a raft? Now’s your chance!

Each of these modes can be played multiplayer, too. You can mow down waves in arcade and story mode or even have a duel in versus mode. The game is clearly meant to be played with the multiplayer in mind, but I had just as much fun playing by myself as I did with another person. It’s hard to imagine what a screen would look like with nine people shooting each other, but it’s definitely something I’d look forward to seeing in a let’s play. 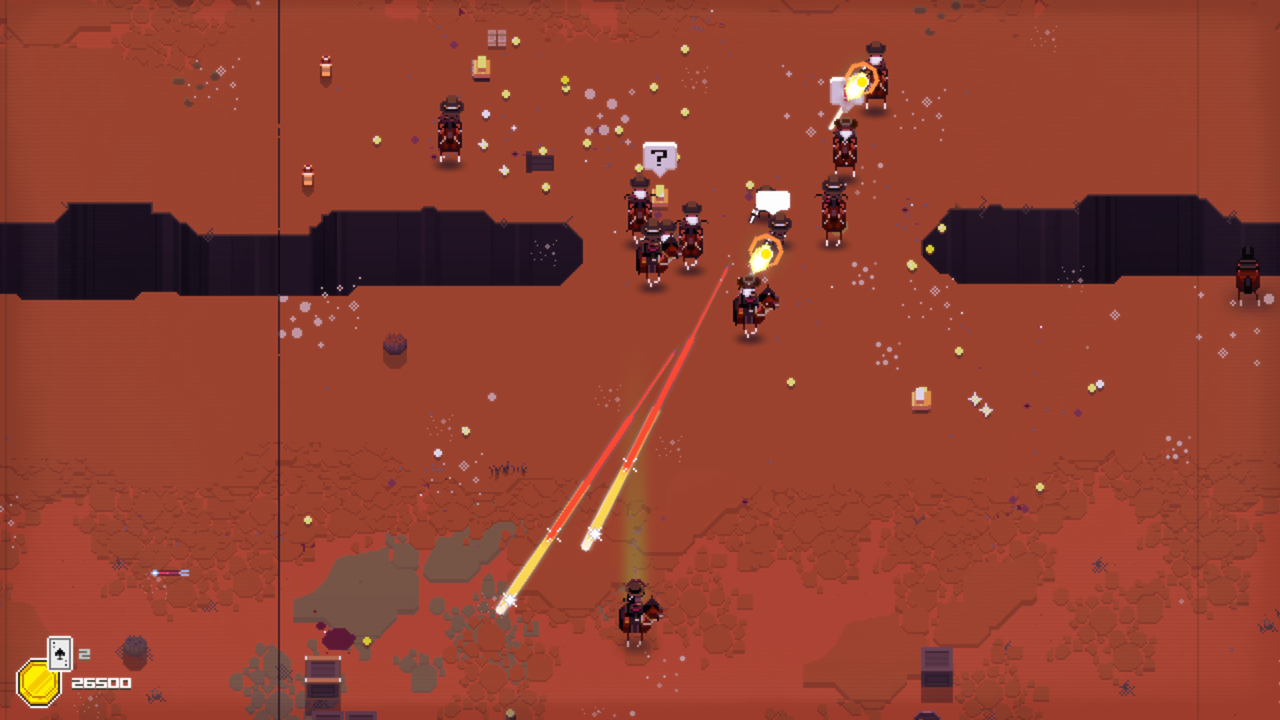 It’s an odd feature but hands down my favorite aspect of fistful of gun was the voiceover. The sounds and music were nice but ultimately what you’d expect in a game like this, but something about that continue countdown and booming title screen voice put me right back into the arcades I’d bring my report card to for tokens.  Fistful of Gun is worth the panic and rage of your first 50 deaths. After that you’ll become a master and have to find some friends to shoot in the face. Honestly, though, Fistful of Gun doesn’t quite scratch the same button-mashing itch as you’d expect, but you’ll still find an anarchic chaos to appease your gunslinger urges.

Full disclosure: This review is based on a review code provided by A Fistful of Gun’s publisher, Devolver Digital.