The Blue Bomber is once back from the past, welcoming players both old and new The concept of re-releasing Mega Man games is not a foreign concept at all for the folks at Capcom. These timeless classics have been released several times already on a medley of platforms including the 3DS, both PlayStations 3 and 4, and have even gone mobile in a few cases. Mega Man has also received the “bundle treatment”, as was the case in 2004’s Mega Man Anniversary Collection, which included 10 games (two of which were previously unavailable outside of Japan). Despite what people may think, this pattern of releasing and re-releasing former-Capcom wunderkind Keiji Inafune’s iconic sidescrollers has gone over quite well with fans of the Blue Bomber. Capcom seems to be determined to keep the classic Mega Man games alive and well (and lucrative) for as long as it can. The newly-released Mega Man Legacy Collection is the Japanese publisher’s most recent attempt. Think about it though; most people interested in the Mega Man franchise have the classics in one form or another by now, yes? Is the sum of the content included worth the money? It is certainly worth taking a look at. A large portion of Mega Man Legacy Collection is, unsurprisingly, a bulk of classic Mega Man games. Included in Legacy Collection are the original 8-bit NES releases Mega Man 1 – 6. They all seem to be very well-emulated with crisp-looking graphics, and feature all of the action-packed (not to mention highly satisfying) gameplay that one would expect.

While the six Mega Man titles included within are not exactly “new”, the collection is certainly not wanting for content. Also included in Legacy Collection are an audio player, an art gallery, an enemy compendium, and a new feature called Challenge Mode. Capcom seems to have caught on to how well-liked the timeless tunes of Mega Man are, because for the first time ever there is an audio player. This musical museum does not just pick and choose songs however; every single song from Mega Man 1 – 6 has been included, all in high-quality. The total run time of each game’s soundtrack is also included. While not necessary, it certainly is a nice attention to detail, and only serves to enhance the quality of the audio player.

Have you ever wanted to know more about Robot Masters, the lesser enemies that appear throughout each level in Mega Man games, or perhaps the non-Robot Master bosses that show up? Hopefully the answer is yes, because Mega Man Legacy has included a full enemy database! The database is split up between games, and is accessible from the game select menu. Within each database section is a list of the corresponding game’s baddie. Each entry includes the enemy’s name, original artwork, and also includes a description of the enemy (generally with a dash of humor). That is not all however; the database also features every enemy’s stats! You are now able to view the total HP an enemy does, how much damage their attacks do to Mega Man, and which weapon is best suited for defeating them. This feature has something for everyone and is a huge help, especially for those new to the series. Galleries featuring art, some of which has never before been released, also make an appearance. They too are segmented by game, and are accessed the same way as the enemy database. Within each section of the gallery are character portraits, group portraits, level designs both used and unused, and even unused Robot Master concept art! It really gives the game an air of history behind it, and can become quite engaging rather quickly.

Last, and perhaps most importantly, is Mega Man Legacy Collection‘s all-new Challenge Mode (now in HD!). Challenge Mode presents players with special scenarios, many with unique twists. Many of the initial challenges feature levels made up of parts of other levels within a particular Mega Man game. Being introductory challenges, these level mixes seem to be great to brush up on your platforming skills, and could perhaps even help newer players become more acquainted with the mechanics present within each Mega Man game. Challenge Mode is, of course, not called “Challenge Mode” for nothing. While the earlier levels may be easy, the difficulty curve rises steadily, presenting players with boss battles, boss rushes, and new remixed levels requiring a sizable amount of familiarity when it comes to controlling the Blue Bomber. It is also worth mentioning that every level present within Challenge Mode has a clear time. While regular clear times pose little threat, getting a silver or gold rating raises the difficulty of each challenge by a surprising amount and seem to be aimed at those on a more professional level.

Mega Man Legacy Collection is just that; a collection. The games featured within have been around since the NES, and even Challenge Mode just a new feature comprised of old features. That being said, it does what it set out to do quite well, and is welcoming to perspective players, regardless of skill level. The galleries alone add quite a bit of value, and are incredibly detailed, and Challenge Mode is great for both those learning the ropes and those seeking hardcore challenges, not to mention every skill level on between. While not cutting-edge, Mega Man Legacy Collection is legitimately enjoyable, and well-worth the $14.99 price tag.

This review is based on a copy of Mega Man: Legacy Collection purchased by Hey Poor Player. 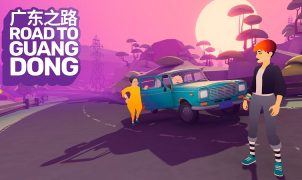 This taxi is tough on the spine Last year, I got the opportunity to visit Hong Kong with my husband, where he grew up. On one particularly hot day,…