When looking at a screenshot of Victor Vran, the first thought I had was: “Oh, it’s another isometric Action RPG that’s a bit like Diablo – where you grind levels and loot continuously while the precious flower of your youth withers on the vine.”. However, when actually playing the game, I found it a lot more reminiscent of Bayonetta. Though gravelly-voiced protagonist Victor might not be able to pull off a skintight catsuit and gun-heels like everyone’s favorite voluptuous witch, both of them are hugely versatile heroes who can smoothly dodge into and out of combat while stringing together devastating combos. Both games also place primacy on skill, rewarding hair-trigger reactions and creativity. Most importantly, they both have an infectious undercurrent of fun to them. It’s the joyless lack of fun that puts me off most ARPGs: I’m forever trying to make numbers go up and waiting for ability cooldowns to fade. With Victor Vran, I’m smiling as I blow up a hundred skeletons with a mortar that fires chickens.

Victor Vran is a story about a demon hunter on a mission to find a friend lost in the psuedo-Russian steampunkish city of Zagoravia. The ever-so-slight problem with his plan, is that the city has become over-run with marauding skeletons, zombies, giant spiders, ghosts and ghouls of every description. The survivors have holed up in the royal palace, conveniently having amassed a vast inventory of goodies to sell to adventurers first. The royal palace acts as your quest hub from which you can travel to any previously explored location in Zagoravia. The people you meet there are also key to unravelling scowly Victor’s mysterious past (TM). Victor is accompanied on his journey by “The Voice”, a constant spirit companion whose job it is to make wry observations about Victor’s exploits and provide cryptic clues as to his past. He’s also there to crowbar in some achingly unsubtle pop culture references, alongside the mercifully occasional appearance of gangnam style dancing zombies. One problem I’ve always had with dungeon-crawl focused RPGs is that they become too much of a lonely experience. Thankfully, Victor Vran infuses just the right amount of silly humour to stop it from becoming desolate, without undermining the game’s solid central story about intrigue and regret.

Luckily for Zagoravia’s reluctant hero, there’s a vast array of weapons Victor can use, all with their own finely balanced strengths and weaknesses. Hammers do a lot of damage and can devastate hordes of monsters over a wide area, but force you to commit much more to attacks. The rapier, however, unleashes finer, armor penetrating thrusts, letting you dash through a line of of enemies, providing a handy escape, but not having such strong area effect attacks. Within a few level ups, you can equip two weapons at once. Since both armaments have separate cooldowns for their abilities, you’re encouraged to switch between them quickly to really maximize your killing power – creating your own weapon combo.

The wide variety of ways to play becomes infinitely more diverse with the introduction of destiny cards. Destiny cards let you apply more conservative, passive bonuses to Victor – such as a higher max health – or more tricky ones, such as shrinking your health bar in favor of more damage. Unlike many RPGs, your “class” and abilities are based entirely on your gear, letting you switch up your playstyle at any time, so you’re always free to change tack if one set-up gets boring. One exception to this is outfits. Outfits are awarded to you rarely in the game and your choice between the three – tanky, magic-y or balanced-y – strongly effects your strategy. All Victor’s outfits have a cool wide-brimmed hat or hood covering his eyes (I suppose he has astral vision), but where they differ is their effect on how fast you gain overdrive, which allows you to cast spells. This choice is quite significant as the number of spells Victor can have equipped – like his abilities for each weapon – is limited to two. Pleasingly, every ability and spell you have equipped is useful, and you can rest assured your ability bar will be neither disappointingly small nor cluttered with very situational powers. Later in the game, you also have access to transmutation, which allows you to imbue weapons and destiny cards with extra attributes, combining other weapons and destiny cards to do so. This makes getting loot a far more interesting process than simply trawling through your new items to sell everything you don’t need. I used a high risk build, equipping Victor with cards that unleashed ice blasts and regenerated my health, but only on critical hits. After a bit of transmutation – maximizing my lightning gun’s critical hit chance – I’d be electrifying swarms of demonic creepy crawlies: beautiful explosions of ice creating a mesmerising maelstrom of elemental energy as I frantically roll-dodged away from attacks, desperately hoping my critical hit regeneration would save me. Every orgy of death and destruction in Victor Vran is exhilarating, and most importantly, the incredible customization available makes every one of them feel like your own twisted creation.

Victor Vran is masterfully designed to refine every last droplet of playability from its main campaign. Each dungeon has several challenges to attempt. These challenges sometimes take the form of something like finding all the hidden chests – usually requiring some simple but entertaining wall-jumping puzzles or discovering secret doors. They can also be more combat oriented like killing monsters and bosses under a demanding time limit. No matter what the challenges are, they offer gold, experience and unique items, so they’re an integral part of the game, not just distractions that make you shrug and say “Oh yeah, I guess I should do those at some point…” then forget about them later.

You can even place magical hexes on poor Victor, making enemies stronger, faster and even continuously damaging him. You’ll get a greater experience reward whilst hexed, and some particularly punishing challenges outright require you to be cursed so cripplingly even the most crazed voodoo shaman would tell you to tone it down a bit. There was scarcely a gothic garden, dismal dungeon or blighted bastion I didn’t feel compelled to test myself with all the challenges on offer. Though Victor Vran is well worth your time to explore its hidden nooks and crannies, it’s not quite a flawless title. The game does have a multiplayer mode, but it feels pretty unnecessary, and tacked on. Though you can play through the game’s many dungeons with other alternate reality Victors online, there’s no special co-operative challenges or missions to encourage you to do so. If anything, having others along with you just gets in the way of completing the game’s myriad challenges at your own pace. Though there is a PvP map to fight other players, it’s a completely bare-bones deathmatch and isn’t really worth more than a couple of plays for novelty value.

Also, the way the game “does” death often seems at odds with the skill-focused nature of the gameplay. When you die, you can chose to return to the quest hub, or respawn, which teleports you back to the last checkpoint with full health. The problem is: the monsters you’ve killed stay killed when you respawn, meaning you’ll often be doing an immersion breaking jog through areas of cleared enemies after you die. Also, dying doesn’t always interrupt certain challenges like you’d think it would. Killing a number of monsters with punitive hexes active isn’t that difficult when the tally doesn’t reset after death. Crucially though, you can’t wear down major bosses with attrition by just dying and respawning since these important encounters do reset as they should. This prevents Victor Vran’s death issues from being a major problem rather than just a minor niggle.

In the end, any flaws simply fizzle away from the electrifying charge of unadulteratted fun Victor Vran overloads your poor unprepared dopamine receptors with. Though Victor Vran is theoretically a middle ground genre-wise as an Action RPG, it somehow manages to be more tactile than most First Person Shooters, and has more in-depth customization than most RPGs. I’m deeply satisfied by the visceral way a wide angle blast from my shotgun violently displaces skeletal bones and gooey spider innards, just as much as I’m painstakingly um-ing and ah-ing about my choice of item as a reward for each level-up. Victor Vran isn’t just the next great leap forward in ARPGs, it’s the next great jumping roll dodge.

Full Disclosure: A review copy was provided to HeyPoorPlayer by the game’s publisher. 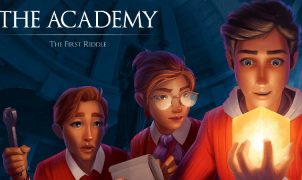