Do you believe in magic, in a young girl’s sword? 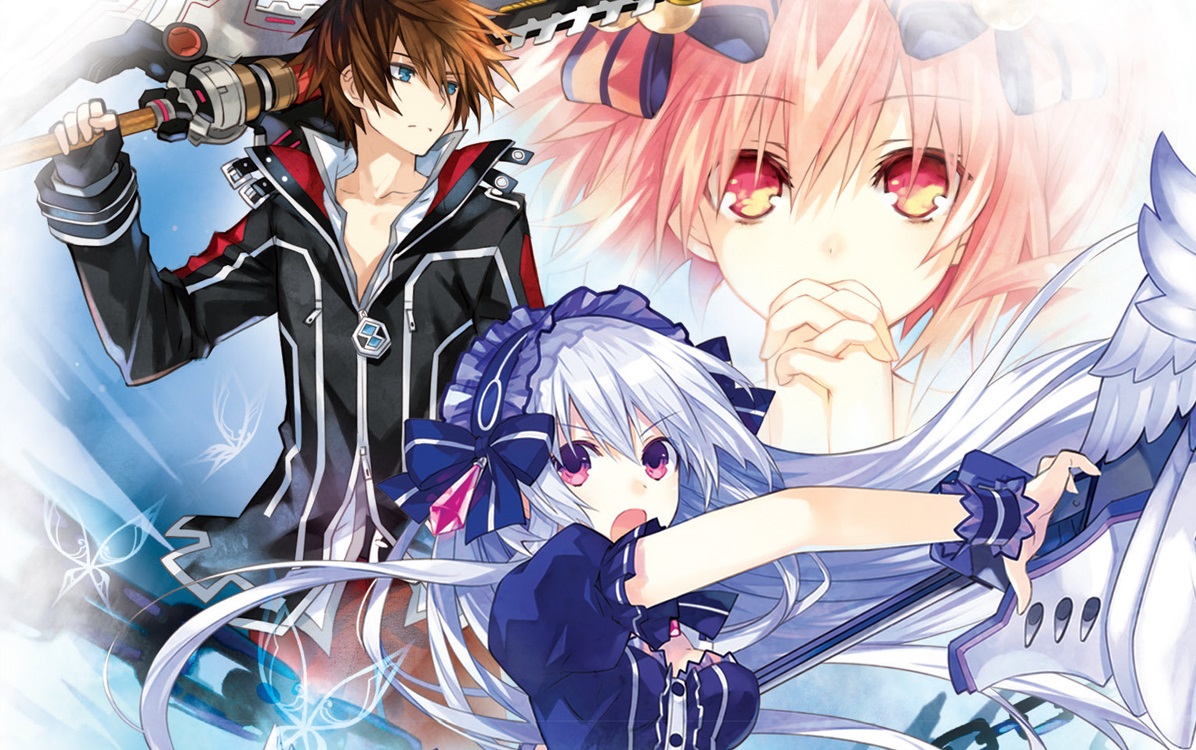 In an age where “HD Remakes” are possible, it seems as though more and more games are getting makeovers in an attempt to once again throw their hat into the ring. While this makes sense for any series that commands a great amount of popularity such as Kingdom Hearts or Metal Gear Solid, there are still plenty of other, less known, games undergoing updates. One such contender is the recently-released, 1080p, PC port of Compile Hearts’ “Fairy Fencer F”. When it comes to any magical being, seeing is believing. However, will seeing this updated PlayStation 3 game be enough to draw in a fanbase?

As aforementioned, Fairy Fencer F is not entirely new; in fact, it has been out since 2013 in Japan, and 2014 in the rest of the world. The storyline follows a young man named Fang and begins with him wandering into a city with an empty stomach and not a penny to his name. After hearing about a local legend involving an ancient sword stuck in the ground on the city grounds Fang decides to try to unearth the swort himself and, not surprisingly, manages too. Unearthing the sword did more than grant him a weapon however; it released the spirit of the sword as well. The spirit, a fairy named Eryn, explained to him that what he was holding was known as a “Fury”. There were supposedly, she continued, around 100 Furies here on this earth, each with their own guardian fairy, and it was up to her to find them all in order to free the Goddess from her eternal imprisonment. Because Fang managed to pull Eryn’s Fury out of the ground, he was destined to help her. 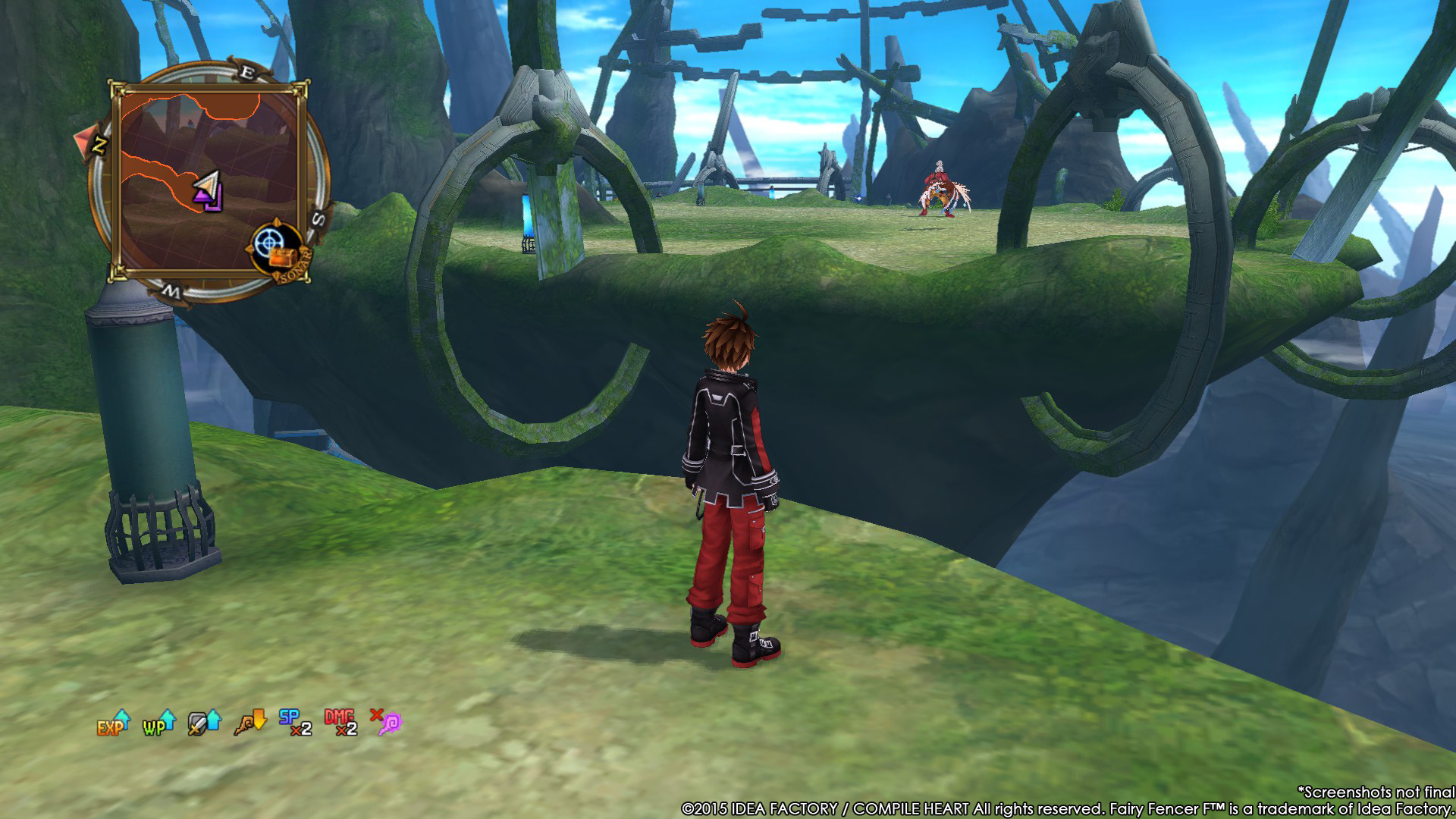 The overall story of Fairy Fencer F was not a bad one. Although it did in fact play on several stereotypes (the “too cool” and “ever-hungry” hero, the girl with amnesia, etc) present in anime and JRPGs, it did so in a way that made the game engaging in fun. The storyline overall was a rather serious one, but it did its fair share of poking fun at itself. It appeared as though those involved with the game’s creation wanted to create a compelling story, yet also seemed to be aware of the follies of creating a game that took itself too seriously. Blending comedy and tragedy can be a difficult thing to do, but Fairy Fencer F definitely did things correctly. While the story does not appear to be the most unique one, fans of the JRPG genre will most likely find themselves enjoying its charm quite a bit. 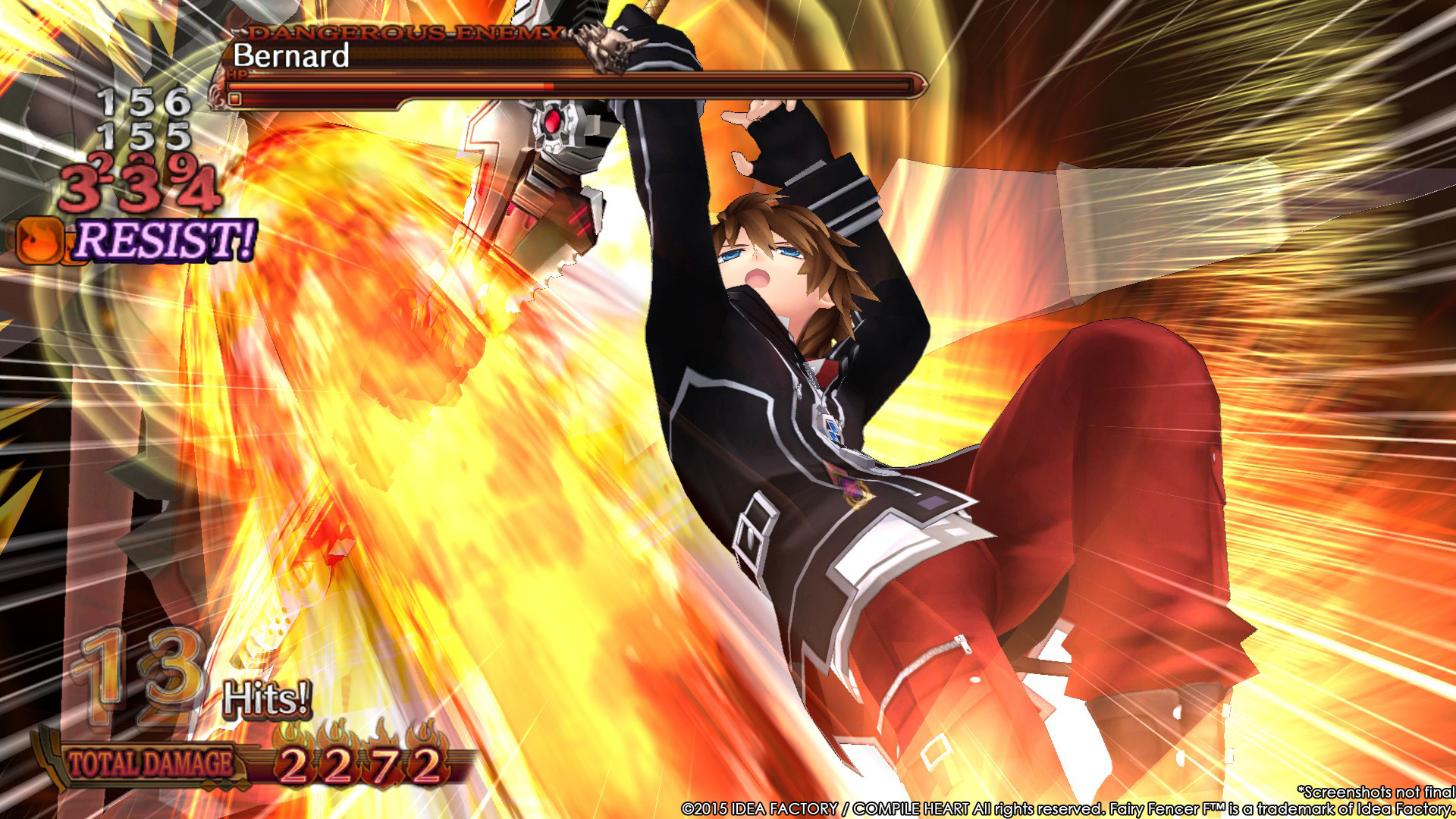 The mechanics, both general and combat-oriented, of Fairy Fencer F seemed to be executed well for the most part also. While traveling in-town and on the world map are as simple as selecting a few options or moving the cursor around, things get a little more detailed once in one of the game’s many dungeons. Once a dungeon is entered the player will be given third-person control of Fang (or whomever the player may have as the Party Leader), and are required to explore their surroundings on foot. The dungeons are filled with treasure to collect, obstacles to navigate around, and, more importantly, monsters. The monsters appear on-screen and move around in real-time with the player. Once the player makes contact with a monster, a battle is initiated. Battles take placed in a turn-based style that requires players not only to decide their party’s actions, but to also be aware of placement on the battlefield as every action has a limited range. The battles usually go pretty quickly, and characters are quite diverse in terms of combat style, skills, and spells. Things generally seem balanced, and fights are quite fair overall. Unfortunately, the transactions from world map to dungeon or, sometimes, from dungeon to combat zone are not without flaws. Most of the time, whenever the game is loading a new area, the framerate drops unexpectedly and drastically. This usually goes away within seconds, and does not ever seem to come back until a new area is loaded, but it is still consistent enough to be a bit of a nuisance. The lag caused by the framerate drop is enough to accidentally get ambushed by a monster or, at the very least, run into a wall. 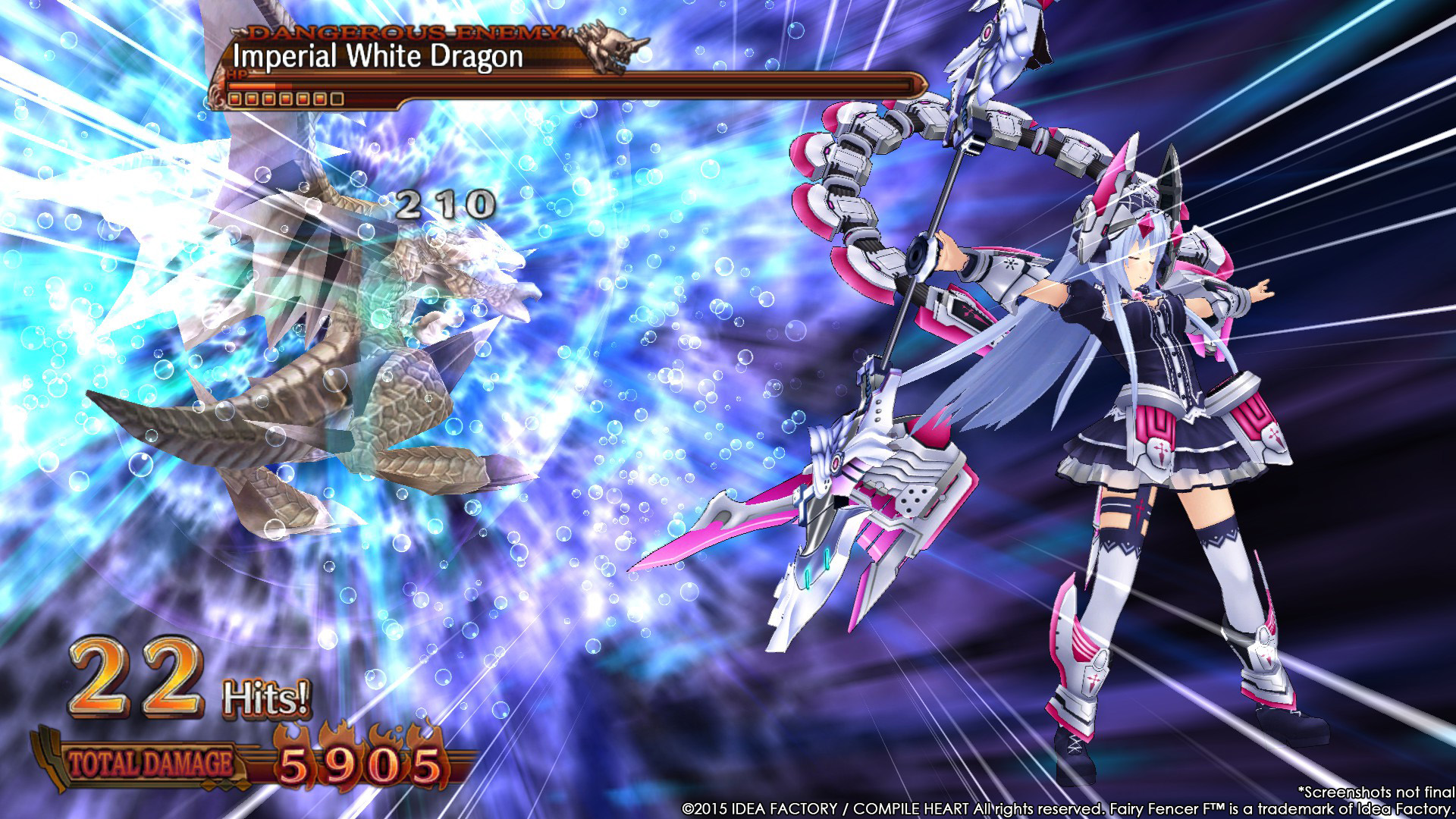 Graphically, Fairy Fencer F is pretty solid. Things may not be detailed to the point that they are in other, more modern games, but it is important to keep in mind that JRPGs do not go for realism like many Western games. Games such as this go for a more anime-like feel, and FFF did it right. The game itself is quite visually appealing, with a lot of colorful scenery and characters, and it quite vivid overall. This being a port of an older game however, it is important to keep in mind the fact that things might not be as clean as they could be. While the graphics are appealing overall, polygons are relatively easy to spot, and clipping is quite prevalent considering that many characters wear things such as coats or dresses. The collectable accessories, while fun to decorate characters with, generally only make the clipping worse. It is nothing prevalent to the point of being shocking or grating, but the more keen-eyed players will definitely notice the rougher parts of the game graphically speaking. 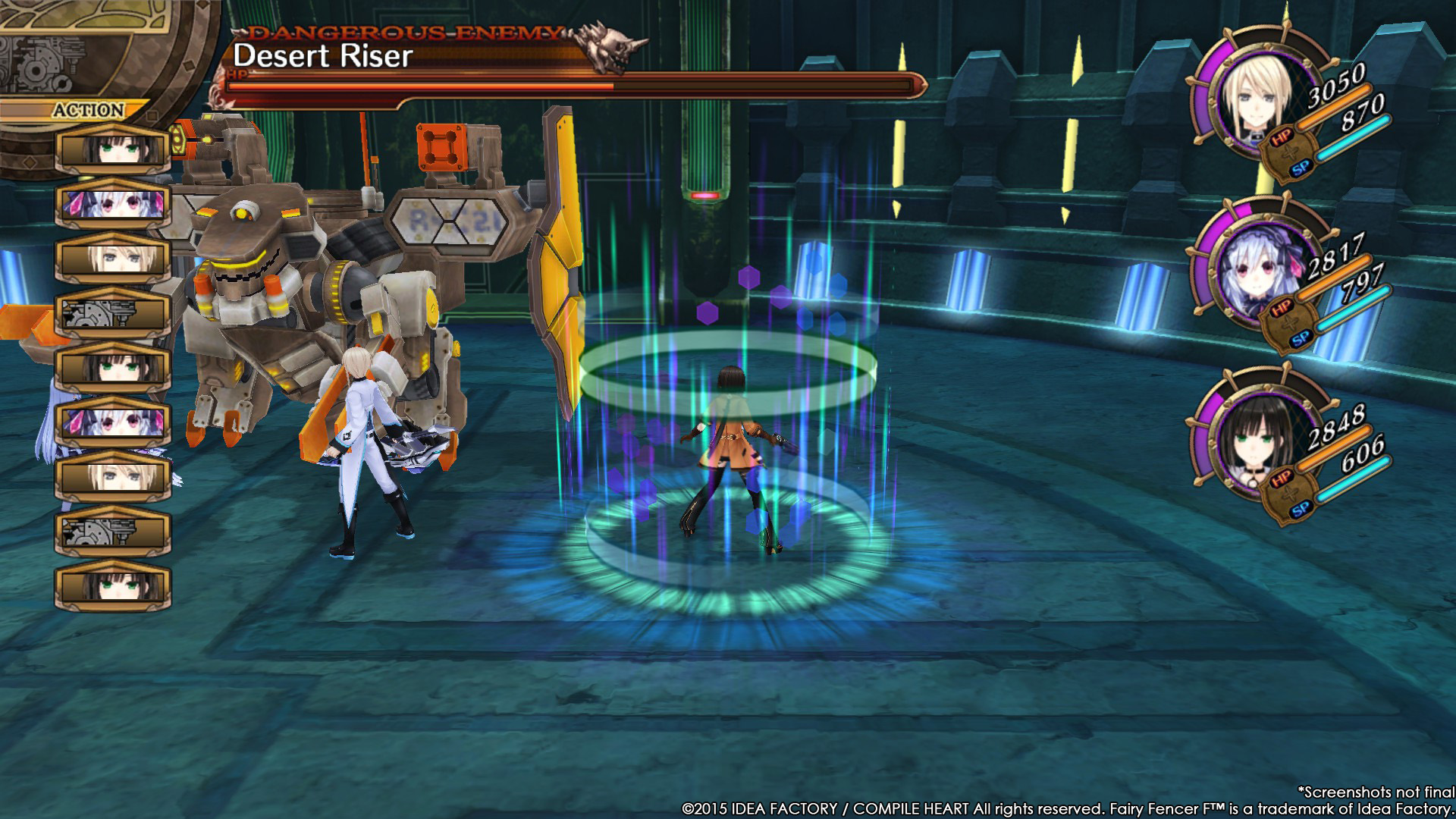 The music of the game was good, and definitely had some high points throughout the soundtrack. While it may not be anything exemplary, it does its job well. The battle music is upbeat and does a good job of adding to the excitement of combat, and the field music always matches the tone of wherever Fang and his party may be. Flipping over to the other side of the auditory coin, the voice acting of the game is done very well overall. Aside from Eryn’s bland tones when helping Fang execute skills or spells in combat, the voice actors do a very good job in every scene, and only serve to enhance the already likable characters. For those who like things a bit more traditional, there is an option to switch to Japanese voice acting. Personally though, I am not sure why you would want to.

Fairy Fencer F, overall, feels like a positive experience. While it is nothing cutting-edge or groundbreaking, it serves its purpose as a very solid and engaging JRPG with plenty to offer both gameplay-wise and story-wise. It does contain several tropes typically found in anime and JRPGs, so it may not be for everyone. For fans of JRPGs, or even RPGs in general, it is definitely worth checking out.

Full disclosure: This review is based on a review copy of Fairy Fencer F provided by the game’s publisher, Idea Factory International.