I have been skateboarding since I was twelve years old. In a few years time I’ll be hitting the ripe old age of thirty and I still push plywood (not a euphemism). It’s my ride to work most of the time, it helps me relax on the weekends, and it’s made me a smattering of friends. Sure I don’t jump down stairs much anymore, but that doesn’t stop me from getting just as psyched about it as when I was young and fearless. Needless to say, I really love skateboarding. I’m the type of guy that has had fun playing even the worst skateboarding games (cough cough…skatepark tycoon). I didn’t play the first OlliOlli game until much later than its release, but after ten minutes with that game I regretted every lost moment. When I caught word I’d get to review the sequel I couldn’t wait. The game came out earlier this year on console but finally us PC jerks are able to get our grubby hands on a copy. 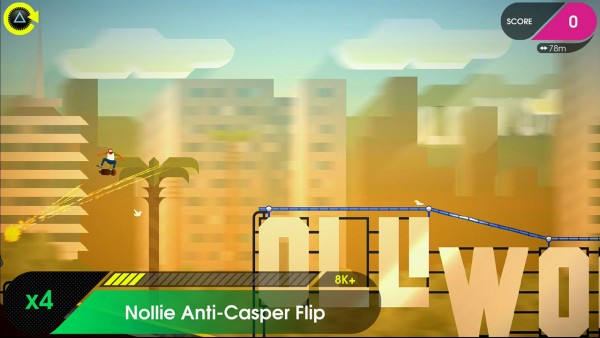 OlliOlli is a 2D timing and skill based game that is relatively simple to learn but controller-smashing hard to complete. Chances are you’ll know what you’re supposed to do but actually pulling it off is another story. Push to get some speed, flick the left stick to do tricks, modify and spin with shoulders, land with the A button or whatever controller you’re using. Not much to it. Except when there is. It’s an obvious comparison but take the control scheme of Skate and give it the fantasy aspects of the Tony Hawk’s Pro Skater series. Mix that up with the same kind of frustration the masochists that play Trials endure and voila, you’ve got OlliOlli . How does OlliOlli 2: Welcome to Olliwood compare, however? It takes everything fun about the first one and improves it in almost every way. 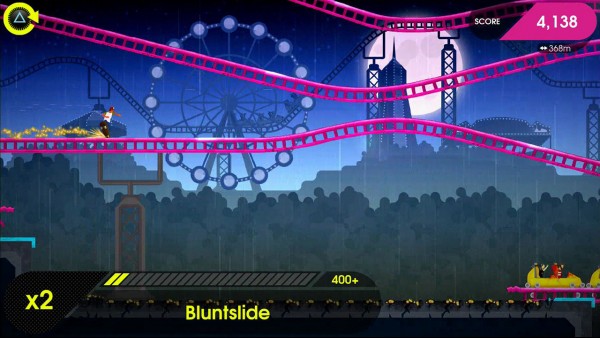 The first thing I noticed about OlliOlli 2 were the visuals. The first game had very retro style to it. This one smooths things out and gives them the color palette is much brighter and the “Olliwood” level design gives the game more creative liberties to give you things to skate on. In OlliOlli you found yourself on city streets and junkyards. In Olliwood, you’re skating your way through different movie sets starting from the streets again but taking you through Aztec jungles, spaceships, and other hazards to break your character over. It was a lot of fun falling into a pit of spikes or lava as opposed to falling down some stairs or landing in going face first off the edge of a crane. 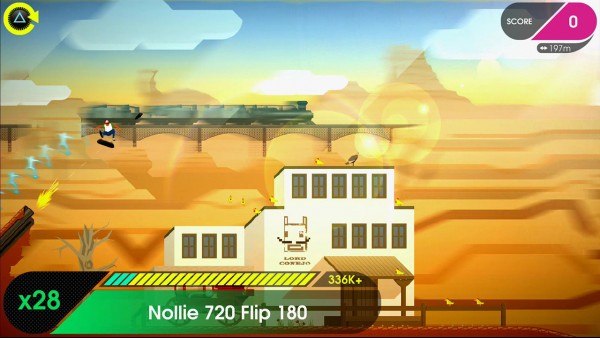 The biggest change in OlliOlli 2: Welcome to Olliwood comes from the updated trick roster. Much like the second Tony Hawk’s Pro Skater title, of which I’m old enough to remember the release, the people at Roll7 have implemented manuals and reverts. For the uninitiated, manuals are wheelies that allow you to link together your trick lines and open infinite possibilities when it comes to scoring bajillions of points. I remember wondering about this when I played the first OlliOlli and the way it’s been implemented is a smooth transition for those familiar with how to play. Basically the designers just added holding a direction while timing your landing. Reverts are the ability to rotate 180 degrees when performing manuals and landing tricks. OlliOlli 2 has a great tutorial for teaching how to do everything and makes things accessible by adding in the new tricks as the game progresses. Every new level gives you a set of challenges and the developers have done a great job forcing you to use the new tricks and teaching you how to be effective. They even added big launch ramps that cause even more chaos. Each level is bite-sized and over quickly, but considering the amount of times you’ll play them it certainly doesn’t feel small.

I haven’t even touched on the real heart of the game yet, however. The real heart stems from the fact that OlliOlli 2: Welcome to Olliwood is fucking hard. I mentioned being reminded of the anger I experienced trying to finish levels in trials and it definitely compares. Each level has five challenges to complete and something in me absolutely refused to move forward until I finished every single one of them. You’re not required, the next levels open up after you’ve finished one or two challenges. On top of that, because of my experience with the first title I was way too cocky. The creators are aware of their audience and they know you’ve probably played the first game. Now that you have the option to manual the score and combo challenges have turned into the millions instead of the thousands. They ask you to do specific tricks into specific tricks. You have to manual every platform in the level. You have to get perfect landings and grinds every time to succeed. God. Fucking. Dammit. I did exactly as they asked but the reset button became my best friend in the process. I actually found myself yelling and taking deep breaths not to throw my controller playing the game but I couldn’t stop no matter how much I needed to. Once I started a level I had to finish everything and I kept playing until I did. Once you actually manage to finish the challenges you unlock the pro challenges which are even harder than the last There are stats in the options menu but unfortunately there are none to tell you how many attempts you make but I’m sure mine would be embarrassing.

If after all this you’re thinking, “sounds great and all, but I’d rather be able to share my frustration…” there’s a split screen mode called combo rush. You and three more of your idiot friends can get together and try to one up each other through the levels. It’s a good time but I spent more of mine blistering my thumbs and yelling at my computer screen. 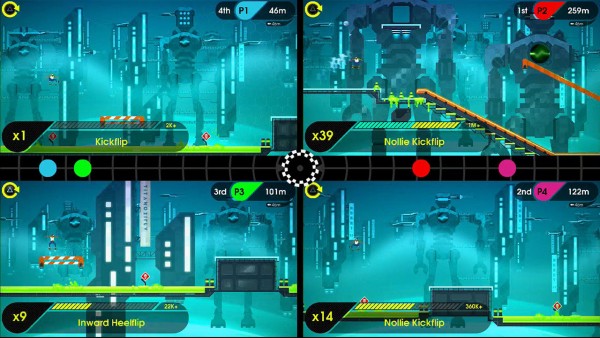 OlliOlli 2: Welcome to Olliwood is an incredible sequel to a great game. I can not recommend enough that you play both but at the very least give this one a try. You’ll get completely addicted but will probably be investing in new controllers shortly after.

Note: This review is based on a Steam review copy provided by the game’s publisher,Devolver Digital. 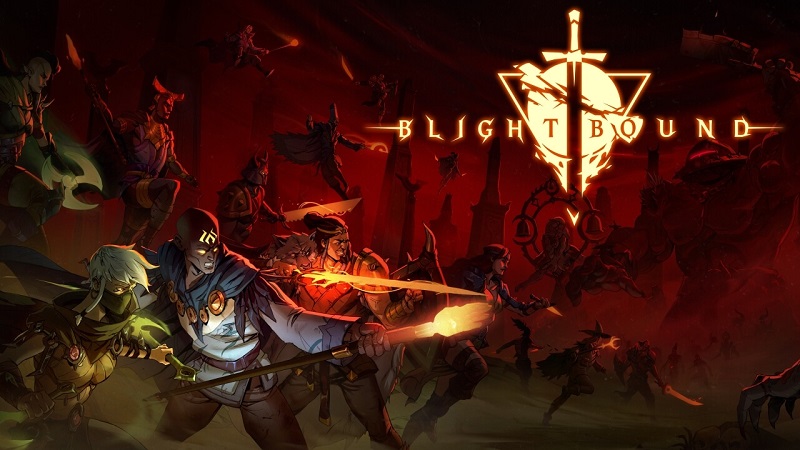 The Detail Episode 3 – Devil in the Detail Review…