The gaming world is in mourning after the recent passing of Satoru Iwata: Nintendo’s mild-mannered but jolly president. HeyPoorPlayer shares the collective sadness of Nintendo fans all over the world, but also thinks we should celebrate the good times from the life of a great man. In no particular order, here’s six videos that really showcase Iwata’s trademark understated humor and fun-loving personality that we will all miss. So, without further ado, let’s take it way, Iwata-san! 6. Iwata gives thanks to a true hero!

After E3 2012, Iwata is sitting in a room with the legendary developer and Mario creator, Shigeru Miyamoto, and Reggie Fils-Aime, president of Nintendo of America. After giving the two of them thanks for their contributions, he waits for them to leave before expressing his heartfelt feelings to the mascot of the event’s Nintendo Direct presentation!

Here, we see Iwata at his lovable best. Whether cracking jokes about his gloriously eighties mullet or the graphics of some of his early games, he really turns on the charm. He also humbly shares the credit for the creation of the classic Mother games (known in the west as Earthbound) with the team he worked with.

4. Iwata tells Reggie who the daddy is!

During his keynote address to the Games Develops Conference in 2005, Iwata shows he’s truly a gamer at heart by talking about his friendly rivalry with Reggie. Of course, he assures us, he always gets the better of Reggie when they play Super Smash Brothers!

Iwata and Reggie continue their epic Smash Brothers brawl in this video. Though it looks like Reggie has Iwata on the ropes, Iwata has a trick up his sleeve!

2. Iwata, Miyamoto and Reggie as puppets, but with a twist!

In this promotional video for E3 2015, we see Iwata and his two compatriots in glorious puppet form! We get to see them strutting down the corridor Reservoir Dogs style before a brilliant and unexpected ending.

Worth the price of admission even just for hearing Iwata say the legendary “Do a barrel roll!” line alone.

In Japan, Gamecenter CX is a mega-popular show where the hapless middle-aged comedian Shinya Arino tries (and frequently fails) to complete a variety of classic gaming titles. Here, Iwata turns up as a guest on the show to introduce Arino to Balloon Fight: a classic arcade-puzzler made by Iwata himself way back in 1985. After Iwata watches Arino play (poorly) for a bit, he shows his gamesmanship by having a go at it himself!

At the end of the video, Arino mentions humorously that his impression of Iwata is that he has a very soft, gentle handshake. This, in a way, reflects the memories we’ll all have of Iwata: the polite, gentle Nintendo president who made great games and brought a bit more joy into all of our lives. 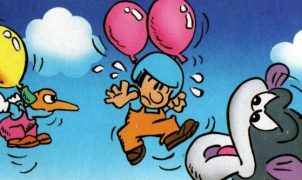