Sometimes a game goes by without doing too much to impress you. While some games will pour themselves into your heart and soul, filling you with emotion and attachment, others just kind of drip on your head, without actually getting you wet enough to have to go dry off. There’s nothing there to move you in any direction, no aspect of the experience striking enough to give any kind of lasting impression. The term “fart in the wind” comes to mind now and then when reviewing games, and Lord of Magna: Maiden Heaven is a textbook definition of the phrase.

Lord of Magna: Maiden Heaven is a tactical RPG boasting an army of 1,000 familiar tropes, and wearing every one on its sleeve. Luchs Eduard is the owner and operator of an inn, passed down through generations in his family. Despite its long life, the inn has somehow not seen a single customer in the entire time Luchs has been its operator (good job, buddy). Luchs and his friend Bart, who is either a co-owner or just a resident jackass depending on the whim of the story, mine crystals in the local caves to sell for money, all to keep the husk of a place running. One day, Luchs finds a mysterious woman in the cave, appearing before him in a flash of light and exhibiting a host of magical powers. Upon waking, the woman reveals that she has no memory of where she came from, and that she knows only her name.

It is at this moment that you will recall, with a sense of foreboding and dread, that you are playing a JRPG. An anime-as-hell JRPG, nonetheless. Lord of Magna: Maiden Heaven has a story. Is it a good story, you might ask? Well, the game certainly seems to think it is. In fact, the game loves its own story so much that in my time with it, I’m pretty sure I spent more time reading cutscenes than playing the game. So certainly, if so much time is taken to focus on the game’s narrative, the plot of Lord of Magna must be something special, right? As Lottie (the pink-haired amnesiac) begins to regain her memories, and meets one after another of her six sisters, surely the plot must go somewhere enticing, in order for it to be such an all-encompassing part of the experience?

Sadly, the harsh reality is that Lord of Magna‘s story is a slow, plodding affair that makes the game feel far longer than its fairly slender ~25-hour playtime. Cutscenes take an unreasonably long time, due often to uncomfortably slow animations or pauses in conversations between characters. On top of this is a repetitive monologue that introduces each single-level chapter of the game, all of them repeating the same phrases ad nauseum. After several hours pass and a few of Lottie’s sisters are introduced, an air of mystery emerges that holds some potential, but the payoff is never satisfying. In fact, some of the characters who join your party come from far more interesting backgrounds than a guy running an inn. I found myself often yearning to follow characters like the world-traveling tech genius Frieda, instead of the red-haired milquetoast shill of a protagonist. Oh! Well thanks for telling me about the macguffin, mr. Evil Mailman.

In terms of story, the words of the day are “repetitive,” “slow,” and “wasted.” But what about the gameplay? Lord of Magna: Maiden Heaven touts itself as a tactical strategy RPG, but fails to really generate enough depth to earn its stripes. Four characters enter each battle, including Luchs and three of the battle-ready maidens who join your side throughout the game. Everyone moves within a three-dimensional range, and can launch different types of attacks depending on their weapon. For example, Lottie can land wide, sweeping close-range strikes; Trixie is a long-range ace with her bow and arrow; and Luchs has limited attack range, but is blessed with several support abilities that supply stat buffs to his teammates. Replacing the typical MP system found in most games of its kind, Lord of Magna‘s system for special attacks relies on keeping characters from attacking in order to charge up their special meter, making that side of battle more an issue of pacing oneself, as opposed to one of energy conservation. A second type of special moves are unlocked by some characters earlier than others, using a Tension meter which fills up as the character takes down more foes.

All of this adds up to what could easily be a pretty substantial system for a fun and strategic RPG. Unfortunately, gameplay is another area in which Lord of Magna virtually ignores its own potential. Each battle (with two to each level) consists of monsters attacking in groups, with a thick ring of expendable grunt enemies surrounding center foes, who will summon more extremely-killable minions to their side at will. If that formula wasn’t used for just about every single enemy type in the game, this could be just one aspect of many on an ever-evolving series of battlefields. As it is, though, only one strategy is ever necessary throughout the game; go for the guy in the middle. Combat in Lord of Magna feels like the developers took a description of Dynasty Warriors from someone who doesn’t actually like Dynasty Warriors, and turned that into a game. The low-level enemies serve as pretty much nothing but kill fodder, adding even more padding to the experience. Other enemies, like bosses with painfully large health bars and enemy generators that will have shat out multiple waves before meeting their demise, make the game’s battles painfully long and dull by a few hours in.

“Okay guys, we’ve got a lot of people to ki- oh, they’re all going down in one shot. Huh.”

If there’s one way in which I feel like I’m beginning to repeat myself here, it’s in discussion of how long Lord of Magna gets. While this unwanted sense of false longevity is due in large part to the pacing and structure of the game itself, it must also be addressed that the game will throw multiple-hour segments of content at you at a time with nary a chance to save. Indeed, everything is so long-winded that, if you are less-than-observant about your 3DS’ battery life, you could lose a hearty chunk of save data should your system lose power. Most points where saving is an option are also kind of a joke, often pulling that The Order: 1886 trick of ending a cutscene, giving the player enough agency to walk through a door, and then starting another cutscene. The cycle is tedious, disingenuous, and cheap.

Now and then, you are given the chance to freely roam around the inn and surrounding areas. You can take the gals out for a free battle, or go and talk to one of them for a basic affinity quest. Eventually, Luchs’ relationships with the girls can grow close enough to romance one of them. These optional threads are really nothing more but strings of side-missions (oh hey, more padding), but are there for anyone who has somehow managed to get emotionally invested in one of the girls in this group of generic, uninteresting stereotypes. Just remember to put them in the recycle bin when you’re done. They will be melted down, their remnants found in the next dozen identical JRPGs to come along. 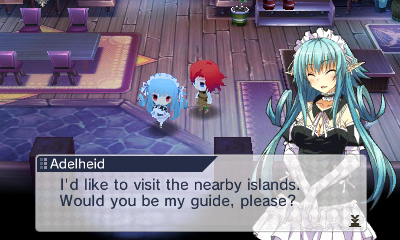 Sure, it’s not like I have an inn to run or anything.

Lord of Magna: Maiden Heaven will not be remembered. Nothing about it makes it worth the time it takes to play it, especially when so much of the game is a cycle of tedium. Everything is drawn out, and nothing feels like it deserves to be. Some good ideas in the gameplay department emerge, but are utterly squandered. The game is adequate, to be sure; there is a list of things that video games have to have in order to be video games, and it certainly does all of those to at least the minimum required degree; but no more.

Full disclosure: this review was written based on review code provided by the game’s publisher.

Classic FPS/RPG System Shock Returns to PC, but what for?   I was a bit young, but I grew up in a household that had a PC since the…