A crypt full of monsters with excellent musical taste.

Playing a game in early access is kind of like following a band from their humble beginnings. The initial release as an early access product is like a first album, made with shoddy recording equipment by band members still in need of practice and experience. Over time, though, more tours are held, and more albums released. The musicians hone their craft, and the group begins to form a stylistic and unified sound as a cohesive unit. The band tries new things as they write new music, and are always better for it in the end. By this token, Crypt of the Necrodancer hits its official release at the peak of its discography.

Crypt of the Necrodancer takes two things that one might not expect to go together, and hooks them right up. The game is a roguelike at its core, with four multi-leveled “zones” to conquer. Each level is procedurally-generated, complete with enough varieties of enemies and destructible terrain to keep things interesting. The hook to all this, though, is Necrodancer‘s titular mechanic. This is not just a roguelike, after all; it’s a rythym-based roguelike. Does this mean random items and levels, unforgiving enemies, and a mix CD of tunes? That would be a yes, a yes, and another yes. In Necrodancer, the whole tiled battlefield is a dance floor. The player character moves to the beat of the music, as do the many musically-inclined foes lurking around each corner. The player attacks by bumping into enemies, meaning that coordinating movements is essential. Enemies dance at their own pace, with some moving on every beat and others only on every second or third. Developing an understanding of precision timing is the difference between life and death. Killing a monster activates a multiplier, increasing the number of coins gathered from each creature’s groovin’ corpse exponentially. Each kill landed will increase the multiplier, as long as players keep on hopping to the beat.

The rhythmic system of Necrodancer results in an engaging, sometimes frustrating, ultimately rewarding combination of strategy and quick thinking. It takes the idea of a turn-based game, where players have time to plan their next move chess-style, and whisks the rug out from under it. In order to succeed in the vile Necrodancer’s various dungeons of evil, players must learn to think on their feet. They will be helped by a dance pad-style control scheme which, although jarring at first, turns out to be a perfect fit for the reflex and precision the game requires.

It also helps that the game is charming as hell. A pixel art visual style brings mushrooms, skeletons and more to life, each with their own little dances to do as they thirst for players’ blood. What story there is is told in stylish stills, narrated by main character Cadence. The presentation works itself to the max, with little quirks like an autotuned shopkeeper singing along to the music of every level of the game. Needless to say, I’ve never smiled more while getting murdered to rock-and-roll chiptune music. I fell into a burning ring of music…

The crypt, and all of the lands beyond, are bounties of items and spells. Cadence has a trusty dagger, but chances are pretty good she’ll need soemthing a tad stronger when faced with giant harp-headed minotaurs and nightmare horses. Taking a golden broadsword into a rave or nightclub might be less than advisable; in the Necrodancer’s realm, though, it’s essentially the dress code to bring as much power as you can pack. Different weapons will affect how easily Cadence can assault her foes, from the distance-based longsword and spear to the broadsword and mace, more suited for taking on lines of two or more foes. These tools can come in a variety of types, from the basics to powerful titanium versions, as well as more complex types such as gold and blood weapons. There are also spells to be found, ranging from fireballs to transmogrification and everything in between, as well as armor and rings that can grant magical effects such as free movement upon killing an enemy, or the ability to pass through walls.

Sometimes items can be found at random throughout the zones, but each level will also have a merchant with three random items for sale. Similarly, portals can be found that lead to secret caves, full of rare and powerful items for those willing to pay the cost. Gold is the main in-level currency for dealings with the merchant. But these portals often lead to places where payment comes from a segment of Cadence’s HP, or from the game’s second currency: diamonds.

Diamonds are items typically found on (or in) the ground, in numbers dependent on what zone you’re in (single diamonds in zone 1, pairs in 2, ect). While not overly useful in the zones, they come into play in the game’s hub chamber. Here, diamonds from the player’s most recent run can be used to buy new items, weapons and spells that will be added to the pool of stuff in rotation in the various zones. As more rooms in the hub are unlocked, even more uses for the diamonds become apparent. These include a janitor, who can remove items from the pool if unwanted, and a dealer, who will supply Cadence with weapons and items that will be automatically equipped on her next run. The fact that only the players’ most recent slew of gems will be usable will make gathering them a much higher priority, should one of the item sellers in the hub be offering something irresistible.

From the hub, Crypt of the Necrodancer offers more resources than just swords and scrolls. Players will unlock access to features like dance pad mode, perfect to those with few windows and just as little shame. There’s also a level editor available to those musically talented enough to conquer all four zones. Local co-op is great for anyone who wants to jam with a friend, and training modes can be unlocked for various weapon types. A character select room offers various characters to choose from, such as a monk who gets hurt by gold. These alternate playable characters, along with other hub characters like the gem dealer, can only be obtained by being saved from cages in various levels, only unlockable by way of easily breakable glass keys. Also, the walls are made of gold. Just like my house!

Four zones might not sound like a brimming amount of content to some, but rest assured that the density and difficulty that come in tow are more than enough to keep players jamming for hours on end. Each zone is split into three normal levels with a rising scale of difficulty, followed by a cacophonous boss stage. Players will die many times along their way, but never will this series of defeats feel like an exercise in futility. Every death is a learning experience, teaching the player a little more about how each zone works. This is especially important because of how different all of them are from each other, first in the kinds of enemies within and later in structural design as well. A favorite example is zone 3, which carries a sort of “fire and ice” motif. Divided in half, different sections of the level will contain either ice- or fire-based foes and obstacles, as well as changes to the music. Something unexpected and interesting about Necrodancer‘s design is the digging mechanic. Each procedurally-generated level is lined with squares of dirt, gravel, and other substances, all various degrees of diggable. This can be useful in certain situations, if the player needs to wait for an enemy to move into a certain position without moving themselves. Staying stationary is impossible without skipping a beat and losing the coin multiplier, unless the player is either attacking someone or – you guessed it – digging. The inclusion of this Minecraft-esque element allows players to use the levels around them as a strategical element, and even hides some secrets behind the dirt and understandably startled worms.

As Necrodancer is a music-based game, it’s hard to avoid talking about its soundtrack. Danny Baranowsky (Super Meat Boy, Binding of Issac) has struck gold again, with a series of fast-paced tracks that never cease to stay engaging. Music changes every level, and sometimes even within individual stages, and always stays inventive. For those in need of a change or slower beat, though, fear not; Crypt of the Necrodancer gives players the ability to fully customize the game’s soundtrack, using any music from their computer’s MP3 library. Feel like killing some zombies to smooth jazz? Death metal? Ska, even? As long as there’s a beat in the song, Necrodancer can work with it, essentially turning the game into the Audiosurf of roguelikes. I guess this is what happens when one room is booked for two different parties.

Crypt of the Necrodancer is a platinum LP of success. Viscous but perfectly satisfying, the game offers four different dungeons with their own twists, each requiring the player to think a bit differently – just like different genres of music. A vast item pool will keep players enticed to seek out coins and diamonds, all in the hopes of one day wearing rain boots and a karate gi while murdering elementals with a cat-o’-nine-tails. Style is everywhere, from visuals to audio, and can be twisted to the players’ liking with the custom music feature. Necrodancer is a game about learning through dying, collecting items by the dozen, and grooving out to whatever that old, undead phantom-man is spinning; and all of these things are done perfectly.

This review was written based on a full retail copy of the game on Steam. 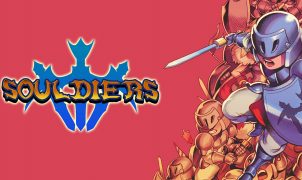 Souldiers Review: Postmortem Platforming Perfection     Generally speaking, I, as a reviewer, enjoy playing most of the video games that I review. I mean, that’s kind of the…