Sayonara UmiharaKawase + is definitely an oddball title. Premiering back in 1994 on the Super Famicom, the unique platformer jumped and boinged its way into the hearts of many Japanese gamers. Since then the series has only seen three main releases with several updated versions and rereleases.

The core of the game revolves around the Umihara Kawase as she clambers, climbs and grapples her way through increasingly difficult levels. The true sinch of the game though is your stretching fishing line which you can cast out and tighten or loosen. This involvement of a grappling hook really expands the classic platforming formula as you progress through the game and become accustomed to using it to get your way to hard to reach areas. What may seem like a simple level may involve multiple swings and grapples across normally impossible jumps. This oddity couple with the strange environments and enemies can definitely explain how it became such a hit in its home market. Despite the overall lack of story from a simplistic platformer, the visuals definitely have a sense of charm. The chibi titular hero conveys a sense of helplessness amidst the giant and unforgiving levels. According to the in-game explanation, she is a sushi chef in-training travelling across the land in search of rare and exotic fish. Search me as to how this ties into working your way through harsh level design and unforgiving physics, but it definitely explains the enemies. Across almost any level giant fish can be found patrolling (usually in very difficult locations such as just at the edge of a platform after a difficult jump.) Stunning a fish with your hook and then running through it places it in your pink rucksack and increases your score. I can forgive the lack of story in such a simplistic platformer, but this loose tie in is a bit frustrating to see with such room to actually craft some narrative.

Commenting on the many re-releases this series has seen, this Vita release is actually a updated version of Yumi’s Odd Odyssey that saw a North American release only through the eShop last year. The odd localization actually came from the contracting of Natsume to release the game overseas. Nitpicking those details aside, this release is identical with a few extras. The resolution is obviously a lot clearer as well as runs at a crisp 60 fps on the more powerful Vita. On top of the updated visuals the package also includes for the first time overseas the original game UmiharaKawase. Needless to say, the original is as brutal if not more than the new release.

I wouldn’t advise this title for everyone. It definitely has challenge, in spades, but it sometimes feels empty. The inclusion of the fishing line mechanic does in the end really stir things up, but I don’t think it does enough to really excuse the blank slate that is the game’s narrative. Honestly without reading some of the beginning in game dialog or product summaries, I would have been totally lost as to my reason for progressing through the levels, much less who I was or what my grappling hook was. Not to mention I’m still thoroughly lost on the actual construction of the levels. I’m supposed to be jumping and grappling across japan but the levels are constructed of random cement blocks with chaotic hazards littered with giant pencils, erasers and notebooks? The game is definitely a challenge, and a well constructed one technically, but it’s definitely lacking in a few aspects that may be a sticking point for people craving a richer experience.

Full disclosure: This review is based on a review copy of Sayonara UmiharaKawase + provided by the game’s publisher, Agatsuma Entertainment. 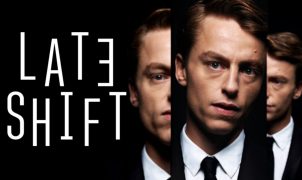