Kirby yet again draws gamers in, but is his newest game truly a work of art?

Those familiar with everyone’s favorite Star Warrior Kirby, are most likely well aware that quite a handful of the number of quirky spinoffs that he’s starred in. Weather he’s stacking blobs, breaking blocks, or racing on Warp Stars, the pink puffball always seems to bring his share of fun twists and unique mechanics in the less traditional games in his series. While many Kirby spinoffs do indeed bring about new ways to play, one of the most creative games in the series would have to be the Nintendo DS game Kirby: Canvas Curse.

Kirby: Canvas Curse had players controlling Kirby with the stylus in a very unique way. Rather than controlling the Star Warrior himself, players took control if a magical paintbrush which allowed them to draw paths for Kirby in order to get him to the goal of each level. The game was incredibly well-made, and received praise from many. Though Canvas Curse was released way back in 2005, Nintendo has finally come out with a sequel 10 years later; Kirby and the Rainbow Curse. The storyline Kirby and the Rainbow Curse pits players against the evil sculptor Claycia, a mysterious entity who has stolen all of Dreamland’s color. Controls are largely the same as they were in the original game. Players use the stylus as a paintbrush to create paths for Kirby. If Kirby touches any lines drawn by players, he will travel in the direction that the line was drawn in (left to right, or right to left) Players can also draw loop-dee-loops, which give Kirby a short burst of speed. While generally not a problem, it can be a tad frustrating to get him to completely stop. Drawing also consumes ink, which is represented by a bar at the top of the screen. Although it recharges very quickly when on the ground, it can be tricky trying to get to higher places if you don’t know how to properly conserve ink.

Kirby and the Rainbow Curse also features multiplayer for up to four people. While player one is Kirby, the other players are given control of a Waddle Dee. Unlike Kirby, Waddle Dees move in a traditional manner and are controlled with a normal Wiimote or controller. They behave very similarly to the playable Waddle Dee (or the “Spear” Copy Ability) in Kirby’s Return to Dreamland, letting them attack normally. It may seem a bit strange, but even having one other person can really amp up the fun. Another interesting feature in the game is the light, but very useful, amiibo support. Those who have Kirby, King Dedede, and/or Meta Knight can scan each once a day for a power-up. Kirby gives infininte charge attacks, Dedede doubles HP and gives Kirby his hat, and Meta Knight makes Kirby’s basic dash attack go further and faster (and he wears the mask, too!) Be careful not to rely on them though; the power-ups only last for one level!

Graphically speaking, the game is fantastic. As Nintendo has done in the past, they have opted to go with a more unique and artistic art style; claymation. Everything looks lovingly sculpted, and you may think that it would detract from gameplay smoothness, but it doesn’t. Unfortunately, while the artwork is solid, there are parts here and there in gameplay that get a tad stale and become overshadowed by the want to look at things instead of playing the game.

The music is a mainly very positive mixed bag. While all of the music is composed well, it’s mainly remakes of songs that shine. Some of the game’s new music feels out-of-place for a Kirby game, and contrast with the art style. On the other side of the coin, any remake featured in the game is fantastic. It’s a safe bet to say that you’ll find yourself sitting in the music gallery at least once or twice.

Overall, Kirby and the Rainbow Curse is a very charming game. With excellent visuals and a generally quite pleasing soundtrack, the game’s aesthetics warrant at least checking out the game. Although short and at times a bit stale, the gameplay is quite enjoyable overall and multiplayer adds to the fun. Rainbow Curse isn’t cutting-edge or completely fresh, but if you’re looking for a new game that’s both fun and relaxing then you might just want to pick up a copy.

This review is based on a retail copy of Kirby and the Rainbow Curse purchased by Hey Poor Player. 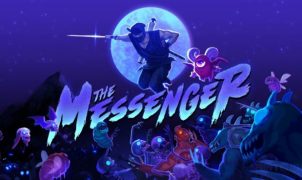 Sabotage Studio’s The Messenger is a Love Letter to a Bygone Era   From the moment I first fired up The Messenger, I knew I was in for a…