It wasn’t a cop out I was able to jump into the Battlefield Hardline, and I must say that I am very disappointed.

Disappointed that I couldn’t spend more time in the beta that is. As a veteran of two previous Battlefield betas, I have to say that Hardline was the most fun I’ve had with a Battlefield game since Battlefield 3.

One thing that stood out was the new customization system. Weapons, attachments, and gadgets are purchased using in game money earned by playing multiplayer matches,with little leveling up required. More powerful weapons such as the desert eagle and the double barreled shotgun are unlocked by completing assignments and are well worth the trouble to get. I have to say that I prefer this monetary unlock system more than Battlefield 4’s “earn by using” unlock system.

Battlepacks made a return as well. The packs can be obtained in one of two ways, buying with in game money or earned by completing assignments. Battlepacks are the only way to unlock some items, such as most melee weapons and even one of the loadout slots. The most common item I found in my battle packs were vouchers for gun attachments, which can be used on any gun you own and save you in-game money. And speaking of melee, that got a few changes as well. The melee features still has the same button as BF4, but now there are more options for melee weapons than just two machetes and some knives. Bats, crowbars, batons, and other weapons can be selected and used, with some larger weapons having longer melee animations given their size (but can someone please explain how a collapsable baton needs two hands to use?).

The basic heist mode was kind of weak in my opinion, matches could be won or lost too quickly and I got bored with the mode very fast. I can say that I did enjoy having multiple options of breaking into the vault.

Hotwire on the other hand was a very enjoyable game mode, very fast paced and loads of fun if you have a good driver. The marked cars are almost always moving and passing each other, which leads to the best vehicular combat I’ve experienced since GTAV.

The beta offered a total of two maps, a city and a desert town called Dustbowl. The city was a rather dynamic map for each of its game modes, especially Hotwire. In hotwire certain sections can be destroyed, resulting in obstructions to the road that can redirect the flow of player traffic and open new pathways for the drivers to use. I gave the hacker mode a try as well, and I found it to be just as enjoyable if not more than BF4’s commander mode.

Of course it wouldn’t be a beta without glitches. The most noticeable glitch I found occurred when I reloaded my gun after exiting a vehicle. My character would enter an endless loop of reloading until I switched weapons. Another glitch I encountered involved my loadout, the game seemed to forget my accessory and camo choices for my sidearm, so I had to go into my loadout every time I died and re-equip my accessories and camo.

Battlefield 4 left a sour taste in my mouth with its bugs, overabundance of attachments (what is a potato grip and how is it any different than an angled grip?), and its horrible single player mode. But I enjoyed my time with Hardline very much, with the fast paced and engaging hardline mode, money based unlock system, and other features, Visceral has proven that they can breathe new life into Battlefield. 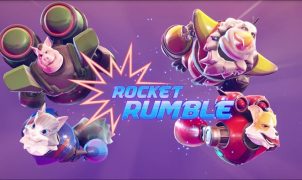 Gordian Quest Review: What if Slay the Spire and Dungeons & Dragons Had a Baby? I am a geek of many, many stripes: band geek (oboe and bassoon for…