In a stunning turn of events, it was announced today by Mojang (in an interactive flash no less) that a Minecraft game created by the amazing minds at Telltale is being made.

I agree, that sounds a little weird. Minecraft isn’t a game with any lore or story. Minecraft is a game that I start up, punch sheep, mine diamonds, and spend hours upon hours watching other people play on YouTube. Simple, but there’s a reason there are almost 18 million sales of the PC version alone. Minecraft is a game loved by children and adults alike, spawning books, plushies, and an amazing community. But I will get to them later.

Here is a list of bullets posted by Mojang themselves:

A lot of interesting points made. You can also read them here, on Mojang’s official website.

Now, I can tell a lot of people are conflicted about this. As stated above, Minecraft isn’t a game with lore, I don’t need that in my Minecraft, I don’t need to know the history of anything. Well don’t fret. There is no story of Steve, the player. There will still not be any official lore.

So what, you ask, will the game be about?

Seriously. There are tons of ways I can see this going, and most of them are great. Mojang has always been a company that has worked closely to their fans, including players like Sethbling and the Yogscast crew. They frequent the Minecraft subreddit daily, and even have a subreddit dedicated to suggestions by the fans. It’s obvious that Mojang will be working closely with Telltale on making the story mode, which means that Telltale will be working with the community as well. There are many things that add to the World of Minecraft, that aren’t officially released by Mojang themselves. There are thousands of mods; ones that add Pokemon to the game, others that add a Portal Gun that you can actually use. The modding community is so rich that it will soon be a integrated part of the Minecraft universe, once the modding API is finished.

Yet, the modding community isn’t the only ones there. Just as rich and filled with amazing ideas, there is a map making community, and this is why I think the Telltale game will shine. Hundreds upon hundreds of maps exist that all add their own story to the game. There are stories where you can escape a haunted mansion, or go on a covert mission to save a princess. All within the Minecraft world. This is where the community really shines, and as with the everyone else, Mojang keeps close ties with them. In Minecraft now, there is a option called Minecraft realms, where you can download and play a handful of these maps; all officially released by Mojang, through the community.

I know I sound like a broken record, but honestly, Mojang’s ties, and by association Telltale’s ties with the Minecraft Community, I can see a Story Mode working very well. Just because there isn’t lore in the Minecraft universe, doesn’t mean people can’t create an unofficial one. And who better then Telltale?

I am personally hoping Herobrine is involved, but that’s just me! You can also read more on Telltale Game’s post here!

What do you think about this announcement? Leave a comment down below! 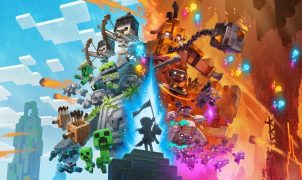 Rise of the Third Power: An Ode to the Classics   Any time I hear the phrase “retro-themed RPG” the 90’s kid in me all but squeals with excitement.…