Dragon Age: Inquisition represents a return to form for Bioware. After Mass Effect 3 and Dragon Age 2 were both disappointments for a lot of people (myself not included), and after the side quests in Mass Effect 3 consisted of a creepy Shepard eavesdropping on Citadel denizens and retrieving random objects for them, the density of content in Inquisition given the world size is truly staggering. Dozens of side quests in each area, around ten zones that you’re never even forced to visit, and a main story that consumes upwards of 25 hours means that I spent way more time with Inquisition than I ever originally intended. The inclusion of multiple playable races in the single player is a welcome re-addition to something that I never felt was lacking with Dragon Age 2, but was a common complaint among others I talked to. I ended up playing as a human anyway, but I fully plan to start another save as a Dwarf 2-hander-wielding warrior at some point. The regular Bioware character creator features are present, but it goes far deeper than that, allowing you to customize everything about your character’s face — down to cheekbone density — and granting the use of color wheels for hue customization. Inquisition starts immediately after the events of Dragon Age 2. The Templar Order and the Mages are at war following a conflict between the two parties in Kirkwall, a coastal city north of Ferelden. The player wakes up in a Rift — a rip in the fabric between The Fade (a sort of dream-world where demons and spirits inhabit) and the living world — and is taken into custody by a Seeker named Cassandra because of a strange brand on their arm. Cassandra conscripts the player into helping close the giant breach in the sky, claiming that the mark on their arm is the key. It’s a testament to the quality of the storytelling that it isn’t required that the player has finished Dragon Age: Origins or Dragon Age 2 in order to understand the events going on in Inquisition. It certainly helps, but it’s by no means necessary. In addition, the character development has always been something that Bioware excels at, and Inquisition is absolutely no exception. Several characters make return appearances, and Varric — the Dwarf Rogue with a big crossbow — is a party member. Over the 40 or so hours I originally spent with Inquisition, I regularly switched out party members just to see what clever banter they had between them.

The amount of content in Inquisition is immense. I was around fifteen hours in before I realized that I hadn’t even done the second main story mission. I spent about ten of those hours just wandering around and doing side quests in The Hinterlands — the first zone you unlock — and collecting crafting materials like leather, ore, and herbs (gathered materials can be used to craft things like weapons, armor, and modifications for both), and I still don’t think I’ve found everything in that area. There are at least a half-dozen other zones just like it (in size, scope, and content density) and I fully expect to return and spend another fifty hours exploring everything. It’s a fundamentally intelligent reward system that so many open-world RPGs don’t seem to understand: the player should be rewarded for exploring with unique experiences and cool loot. This sure is an RPG!

The combat is a pretty drastic departure from the previous two games. In lieu of the classic RPG-style combat of Origins, or the flashy combat in Dragon Age 2, it’s more akin to modern action RPGs: holding the right trigger or R2 causes the player to attack, and spells and abilities are mapped to the face buttons. There are no healing spells in Inquisition; instead, there is a limited healing system almost surely inspired by Dark Souls — the player has a set number of healing potions shared across their entire party, and returning to a camp or finding a supply stash replenishes those potions. It’s an ingenious way of ensuring that the player isn’t comically overpowered just because they brought a high-level healer, something that was problematic in the last two games.

The aspect I was most interested in going into Inquisition was the multiplayer, though. I was fairly sure I would enjoy the single-player but in spite of spending over a hundred hours on Mass Effect 3’s multiplayer, I was unsure whether I would enjoy Inquisition’s. It’s similar to Mass Effect 3’s in that it’s a session-based enemy kill-fest which has players completing objectives along the way and fighting bosses, but it’s unlike Mass Effect 3 in that failing objectives doesn’t immediately cause the mission to fail — each player simply gets less gold. It’s also different because where Mass Effect 3 had the player collecting guns and upgrades that unlocked forever, players in Inquisition find random loot and can salvage what they don’t need to craft other gear. I’m not sure which I like more, but there is certainly something to be said for the iconic feel of certain guns in Mass Effect 3. Inquisition also looks gorgeous. Still, shots absolutely do not do it justice; in motion, it’s one of the best looking games of the year. I was getting abysmal framerate on the PC version until I updated my drivers to the newest beta version, but this is more due to my own stupidity and the quality of AMD’s drivers than anything, and I spent a good part of the afternoon last Saturday getting to the bottom of the issue. After I updated drivers and turned off a few graphical options, I got a pretty smooth and consistent 60 frames-per-second in game, and 30 frames-per-second during dialogue and story clips (Frostbite 3 caps at 30fps in cutscenes).

Ultimately, Inquisition represents the best parts about Bioware’s RPGs: tons of content, incredible character development, terrific writing, and a campaign that I kind of want to restart right now. The multiplayer is a welcome addition, especially since its quality is equal to (and greater than in some ways) Mass Effect 3’s multiplayer, and I absolutely look forward to playing more of that too.

This review is based on a retail copy of Dragon Age: Inquisition purchased by Hey Poor Player. 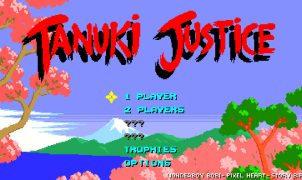 Ignoring This Game Would Be A Grave Injustice With all the great games that have come out these past couple years, I’m ashamed to admit Tanuki Justice wasn’t even…