Polish developer Telehorse Studios has launched an Indiegogo campaign for their puzzle-based adventure game Steampunker. Telehorse studios is seeking funding in order to make the game available for both iPhone and Android. There are several stretch goals, using extra funding to translate the game into several different languages as well as physical versions of the game’s soundtrack. The title is currently available on IPad only.

The game takes you through the story of Vincent, an inventor and engineer. Vincent must battle an army of evil robots through harbors, submarines, islands, the moon, and even spaceships, saving humanity and making the world a safer place for science. Steampunker features beautiful hand drawn graphics, brain bending puzzles, and atmospheric environnments to immerse players.

Steampunker has been nominated and won several awards, including the Indie Prize for best game art and an Appaward for best entertaining app.

Many different awards for funding are available, including digital copies of the game, merchandise, credits, and even your face in the game. The campaign was launched November 4, 2014, and will end December 14, 2014. For more information and to fund Steampunker head over to their Indiegogo page. 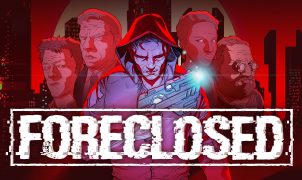 FORECLOSED Review: A Gripping Cyberpunk Adventure   Has a game ever given you instant Déjà vu? For me, FORECLOSED is one such title. Maybe it’s the stylish comic book…