Fist Of Jesus: The Bloody Gospel of Judas Review (PC)

Are You Ready for a Biblical Assault to All of Your Senses? The Fist of Jesus: The Bloody Gospel of Judas is a gore-fest of a good time. Based off of a fun, ultra-violent comedy short film released in 2012 from Spanish film makers David Munoz and Adrian Cardona,  starring Marc Velasco and Noe Blancafort.  This short film is wacky, fantastic and really was fun to watch.  So naturally I was really looking forward to playing a game based off it.

The premise of Fist of Jesus, if you haven’t seen the movie, is that Jesus Christ is attempting his first resurrection miracle on Lazarus and succeeds….sort of.  Lazarus is revived as a zombie and immediately begins biting others and turning them into zombies as well.  Jesus and his pal Judas are tasked with having to fix what went wrong. This involves fighting undead enemies of all sorts including Roman soldiers and cowboys who need to get sent to the pearly white gates of heaven.

The story of the game, which was also written by the guy who wrote the movie, expands upon the story that the film told and is just as funny and outrageous. If you want to check out the film yourself, scope out the biblical butchery below!

Upon first starting up the game you will be treated to a great art style which I would liken to being similar to Castle Crashers. Very bright, colorful, and cartoony would be my best description. This in my opinion was perfect for this title and only added to it’s zany charm.

The game is a pretty basic arcade brawler that isn’t super complicated and has quite a few of RPG progression elements thrown in, as well a few fun little mini games to throw in some variety. Don’t expect anything groundbreaking here. You can use either a keyboard or plug in a controller. If you don’t like the pre-assigned controls which I personally felt to be a bit strange you can always re-map them in the menu. I chose to play most of the game with an Xbox 360 controller because to me it felt more natural for this kind of game. Once you get started get ready to play as both Jesus and Judas. Each have their own unique move sets and can switched back and forth between them in game on the fly as you feel necessary. Jesus is a bad ass! His special moves allow for him to make Jesusbreads which can heal you, he can use the Jesusploxion, which is a close range blast which can hurt multiple enemies. Finally, our almighty Furious Father can summon his Jesusfire, which brings up a wall of flames that can scorch his enemies and deal some massive damage while they are chasing you. Judas is no slouch either (and was my favorite to play as later in the game). His special moves are the Judaskameha which is exactly what you think it is, a biblical kamehameha straight out of DBZ and can deal serious ranged damage to his sides on his plane, he also has the Judastars which will rain giant stars at random all around the battlefield to damage enemies severely and his final move is the Judaskiray which can do some close damage but provides a limited shield to protect you from harm temporarily. As you upgrade each move they can deal more damage but also has other effects as well. The Jesusbread skill will drop weapons eventually, and Judaskameha goes from both hands, etc.

Fist of Jesus has 60 levels to get through in order to finish the game. Most of these levels have some funny dialog in the beginning between Judas and Jesus before having to complete their objective for the level. There are also 10 training stages that become available upon unlocking certain skills that help teach you the skill before having to use it in the story mode. These levels are optional but recommended so you know how to properly use your new skill. 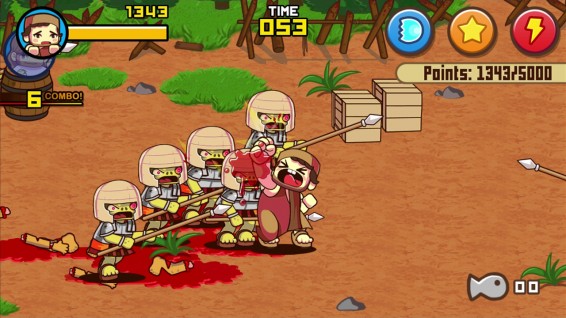 Going Biblical on their asses

The mini-game that you are rewarded with through each zone on the map is a gun duel between zombies in which you have to press the action button at a certain time in order to kill your opponent. The first one to 3 wins is the victor and will receive a random reward.

Each of the story levels also has up to three stars for you to get depending on your performance. The stars you earn are used throughout the game to perform miracles. The miracles act as a gate to later parts of the game in order to make sure you don’t get to far with underpowered characters. Lo’ for our saviour turned water into beer.

The combat is mostly one button combat that eventually peppers in some special moves later on in the game. Eventually you can start performing Divine Punishments which are over-the-top finishing moves that involve hitting a certain area on a meter which pops up above an enemies head while they are stunned. You also have a throw attack that lets you throw big sloppy fishes at your foes as a ranged attack. There are a ton of weapons which can be picked up along your way to also help keep foes at bay. They range from giant crosses, to guns, to whips to molotov cocktails, and the ultimate tool of righteous devastation, chainsaw swordfish skeletons. There are also power-ups that your zombified attackers can drop can provide enhancements as well like a shield that makes you temporarily invulnerable or a punching glove that can make you deal more melee damage for a short period.

After each level you are given certain amount of experience, money and points.  These allow you to upgrade your dude’s skills or buy valuable Reliquiae which when combined as sets can allow for more skill enhancements as well.  The Reliquiae are all really funny and pay homage to many other games and nerd related thing.  E.T. Atari cartridge, 1-up mushroom, a Hulk Hogan doll are just a taste of a few of them.

Fist of Jesus’ soundtrack to the game adds to it’s quirky sense of humor sporting spaghetti western tunes through much of it.  I personally loved the soundtrack.  It reminded me of soundtrack for the old Wild Arms RPGs that came out on the Playstations which is a good thing.

I had a whole of fun with this game but it isn’t perfect.

First of all the hit box isn’t very predictable or accurate and many times when an enemy isn’t even near me I got hit by a punch and some times in rapid succession causing my death. This can get a bit annoying after a few times. So when you play expect to get hit by shots that don’t look like they should land. 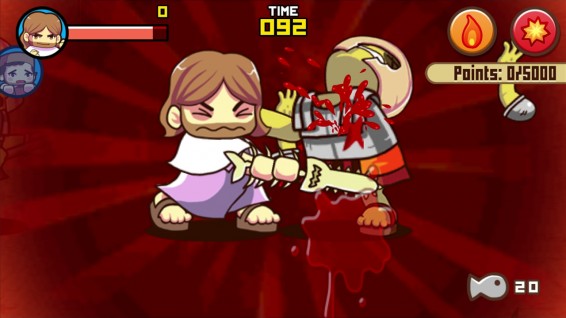 I’m not slaughtering you because I like you or anything, baka!

Second the levels can feel very repetitive after a while being that every level is the same design every time sometimes a new graphical backdrop is added but it is basically an arena with some objective given to you in the beginning. These objectives can often feel the way as well: Kill X amount of guys, score X amount of point, kill X amount of mini-bosses, do not take any damage, kill a certain kind of enemy X amount of time. Sometimes multiple objectives can be stacked but after awhile this can make the game feel a bit boring.

Third issue I had is that I really wished that there was a multi-player option. Since there are two characters that to be seemed kind of like something that naturally would have been here and let me down that I couldn’t have a buddy enjoy this funny game alongside me.

My last big gripe is that at times it feels too easy. I am a pretty experienced player in the genre so this was kind of a thing to me. Maybe later the team can add a patch that improves the difficulty.

In the end this is a game that I would totally recommend.  Fun, no serious learning curve, tons of action, and the biblical beat-’em-up is absolutely hysterical the whole way through, and for the price you really can’t complain.  It would be a sin not add this fun little title to your collection.

Full disclosure: This review is based off of a copy of Fist of Jesus: The Bloody Gospel of Judas provided by the publisher.