Big Empty House: A Golden Wake brings Wadjet Eye and Grundislav Games together in the 1920s, but for what purpose?

Well hello there, chap! Welcome to Florida! Sure, this city may not look like much yet, but soon enough it’s gonna be booming! We’ve got big plans for this place, kid, big plans!

…Big plans, indeed. In terms of story, developer Wadjet Eye is certainly no stranger to thinking big. Best known for the Blackwell adventure game series, which was concluded earlier this year, Wadjet has joined creative forces with the folks over at Grundislav Games to create A Golden Wake. Setting itself in the sunny land of 1920s Miami, this new point-and-click serves up ingenuity and frustration in equal measure, all accompanied by an impressive dose of history. 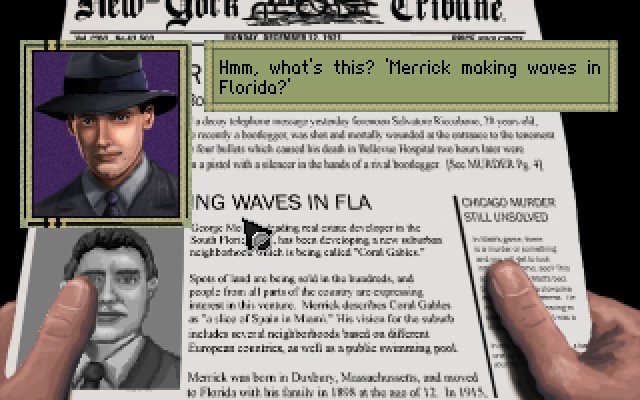 “Florida? That sounds like a place that could become a creepy old people haven in a few decades!”

Alfred Banks is a real estate agent starting his story out in the cold, polluted air of New York City. After work stress reaches an all-time high at the agency where he works, he abandons the business his father began and sets his sights on the sunny lands of Florida, beckoning with enterprise and promise. In Alfie’s shoes, you’ll find yourself persuading those around you, and doing a bit of sneaky work to get yourself up the ladder of success under the wing of George Merrick. Mister Merrick (who was an actual dude) is an ambitious man, whose real estate project, Coral Gables, (which was an actual place) is making waves. Alfie’s goal is to make himself an instrumental part of that project, and make the Banks name mean something again.

Mechanically speaking, A Golden Wake is a distinctly vanilla point-and-click adventure game. You control Alfie, the extent of which is a cursor and inventory. It all feels very familiar, perfectly functional, and more or less satisfying, if a bit dull. You can look at things or directly interact with them, and 9 out of 10 things you hover your cursor over have some practical use.

This isn’t to say, though, that a complete lack of ambition lies at the core of A Golden Wake. The game’s distinct mechanic that aims to set the game apart is created through any seller’s best tool; the art of persuasion. Several times over the course of the game, you will be confronted with a character who you have to persuade to do something for you, such as getting a local political figure to give a speech at a special event. You will be given a series of dialogue choices, and will have to judge the character’s personality to try and figure out which choices to make in order to best persuade them. Also available is a “Seller Intuition” feature, which points out certain aspects of the person’s visual appearance in order to tell you their basic personality type, helping you make the right choices as the true master of persuasion that you are. 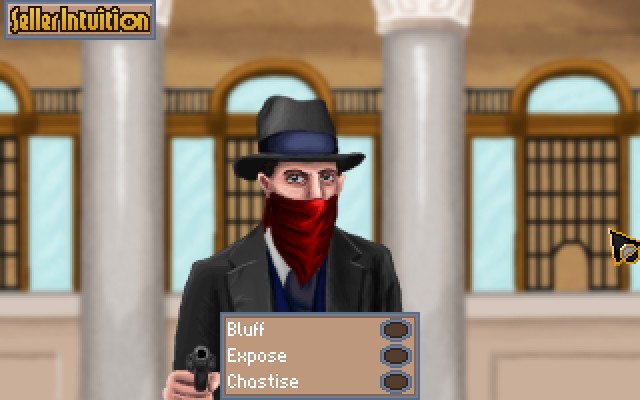 before you say you are robbing this bank, let me explain you a thing

Unfortunately, the problem with this entire system is that it just doesn’t work all that well. Your Seller Intuition will give each character a simple diagnosis such as “pushover” or “ optimist,” which would be okay if the accompanying dialogue choices were written in a way that corresponded with the given personality. Sadly, this rarely occurs, a fact made worse by the fact that the short options given don’t always adequately explain what Alfie will actually say. It’s a good system in theory, just done badly. The Seller Intuition system is meant to help you, but it rarely actually helps at all.

Persuasion puzzles aren’t the only type of challenge thrown your way, though. A Golden Wake has a few really good puzzles, including a couple that take a lot of time and careful thought, such as matching up prospective buyers to possible new homes. Here too, though, the game just isn’t very good at connecting two halves of any given puzzle. In the aforementioned puzzle, a couple people I had to match to possible homes seemed to have no preferences that could make the eventual decisions easier in any way. The fact that one of the hardest puzzles in this regard occurs in the games first hour may also be a huge turn-off to some players.

The other issue that A Golden Wake suffers from is a lack of any real sense of momentum. If you find the world of real estate inherently thrilling, I applaud you, for you are truly a unique human being. For the rest of us, though, the story lacks any real hook for a significant measure of its length. A Golden Wake is touted as involving conflict with the mafia, but not a New York accent is heard, nor a shady suit-and-hat combo seen, until halfway through the game. The story is predictable, and the main character never really takes a moment to be likable; the writing seems determined to make players dislike him, even. The climax is okay, but seems to expect us to care more about certain characters than we are ever led to throughout the game. It’s the kind of situation where a character might be painted more and more like an antagonist as the game goes on, only for the final act to suddenly turn that same character into someone to be saved and cared about. 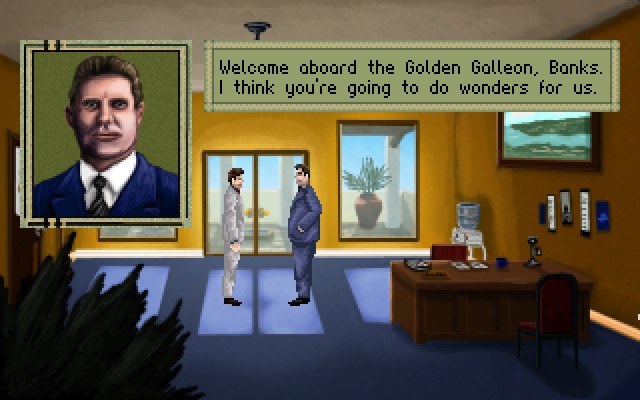 “I think you’ll do wonders running around doing stuff for me and my imposing chin.”

Not all is lost in the land of Florida, though. What some of the puzzles in A Golden Wake lack can be found in others. Good environmental puzzles show their face a few times, and are very welcome, most notable being a sort of scavenger hunt in the Florida everglades. A couple puzzles require some knowledge of wordplay, and are probably the most clever in the game. It’s just a shame that really cool challenges in one area are accompanied by a lot of faults in others.

A Golden Wake isn’t a modern-day adventure, nor one in any sort of fictional universe. It takes place in the very real world of 1920s America, and as such it has a lot of proper representation to do. A good job is done here, generally speaking. Areas are recreated in really nice detail, some of the most meticulous pixel art I’ve seen in the point-and-click realm. The soundtrack has its catchy moments, and captures the sound of the era quite well. Voice acting is mostly quite solid, with the laughably bad roles being mercifully relegated to minor characters only. 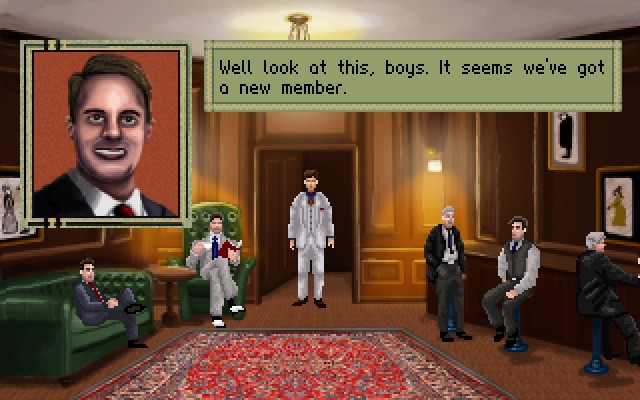 A lot of characters in the game are actual historical figures from the time, and although I’m not exactly an expert in 1920s Floridian history, there don’t seem to be any atrocities in the representation of the people on who they are based. A couple characters don’t seem to fit in very well, though, and don’t really appear to have a lot of purpose other than showing that the developers did their research. This doesn’t really lead to bad writing, per se, but it does create a couple moments that may prompt you to wonder “wait, why did this story event have to happen in this place? Was the point just to show that this one person exists? Okay, thanks. Bye, see you never.”

The final, breaking-point issue with A Golden Wake is that it just doesn’t feel like a story worth telling. Interesting stories can certainly be told in any time or place in history, and the era spanning from the 1920s real estate boom to the eventual great depression is certainly a span of years worthy of some good quality storytelling. But nothing about the story feels special. It doesn’t feel worthwhile. In fact, it really just doesn’t feel much of anything. No turn that our main character takes is unexpected, and it takes most of the game for him to develop into more than just…kind of a dickhead. It’s one thing to set a story in the past, but its another indeed to assume that the historical aspect will in itself be sufficient to drive the game forward. If the event were some little-known event, or one with contradicting reports, then relying on history alone could be valid. Sadly, A Golden Wake presents a story that just feels like a collection of elements we’ve seen before, and it never fully shakes that off. No amount of nice presentation or catchy music can fix that. 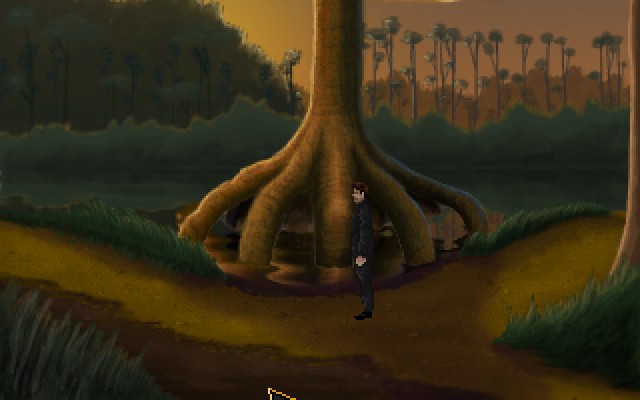 What does it say about this game that the thing I found most memorable was this particular tree?

As the ’30s were to the ’20s, so A Golden Wake is to Wadjet Eye’s previous efforts from this year. The game has some heart to it, but that heart is pumping its life blood into a game that’s very pretty, but ultimately feels kind of dead anyway. At the risk of repeating myself, (because I know I’ve made this joke somewhere before) A Golden Wake is a great depression indeed. Potentially interesting dialogue mechanics are utterly wasted through their own vaguery, and what genuinely good puzzles are found here and there feel like lost opportunities. A Golden Wake was a land of promise, just like the financially promising Coral Gables development itself, but a hurricane of bad execution ripped through the place somewhere along the way, and left us with something that just doesn’t have anything compelling to its name.