Cold open on a New Orleans street at night.

Jane Jensen has spent her life working at the art of storytelling, with games such as Moebius and Gabriel Knight: Sins of the Fathers. Speaking of the latter, this year marks the 20th anniversary of Jensen’s voodoo-themed point-and-click adventure in ’90s New Orleans, and the occasion is being marked with more than ritualistic symbols carved into the ground by victims of mysterious murders. Those are still around too, of course, but more significant is an anniversary remake, published by Phoenix Online Studios, of which we have kindly been given a first look.  The remake of Gabriel Knight: Sins of the Fathers holds a fair share of charm for veteran fans and newcomers, despite a couple stumbles. Gabriel Knight is a dashing, attractive writer voiced by Jason Victor, replacing Tim Curry’s role from Sierra On-Line’s 1993 original version of the game. From his bookstore in the French district of New Orleans, Gabriel has begun sleeping restlessly, as a recurring dream haunts him each night. By day, Gabriel is researching the Voodoo murders, a recent string of killings that have plagued the city, marked and connected by disturbing similarities between them. Gabriel claims the research is for his next book, but he seems to be getting even more invested in them as time goes on. Gabriel’s line into the murders and the investigation is Detective Mosely, his childhood friend. Gabriel, Mosely, and those around them will be pulled deep into a web of voodoo culture, and the lore of the subject’s history in New Orleans.

The preview build of Gabriel Knight: Sins of the Fathers contains the first two days of the game. In that time, I found myself doing a good deal of investigating, and a greater deal still of snooping around and talking to characters. The game gives you a lot to look at and inspect, but is always willing to make sure you know where everything is. In each area you traverse, holding down the space bar will call up indicators for all the things you can click on. Also handy is the small counter in the top left corner, which will go up each time you perform one of the 300+ actions significant to moving the game forward.

Each puzzle in the game’s first two days is well-done and requires thorough thought, occasionally requiring you to overturn every stone you can. Dialogue is also key, but the environment is also extremely important. Luckily, the game has you covered here as well. Gabriel Knight does a good job at giving you a variety of tasks, but helping you stay organized with all of them. Some things will be brought to your attention on the first day that you can’t do anything about until the second, and some things will seem to come to a standstill when they haven’t. Luckily, Gabriel likes to keep a journal on hand where he writes down thoughts on the game’s various goings-on. These notes can help you remember what you have or haven’t done, as well as nudging you in the right direction on some occasions. Providing even more help in a similar respect is the journal’s hint system, which has multiple “levels” of hints, ranging from vague suggestions to specific directions. These can be helpful, but unfortunately they can be occasionally misleading as well. So the puzzles are good, and the game offers plenty of education on how to move forward if you get stuck. What about presentation, which so often becomes one of the make-or-break aspects of point-and-click adventure games? This player is happy to report that in this respect, this remake did not disappoint…mostly. The visuals are extremely well-done, with meticulously detailed backgrounds that fit a lot in without being  too daunting, and 3D character models that look great, even when occasionally walking right through each other. Oh, preview builds.

The game is accompanied by what might be worthy, should the full thing be as good as what the first two days hold, of being called one of the best game soundtracks of the year. (whether that title applies to a remake is up to you, I suppose) The opening and one other cutscene insofar as I played were done in a sort of motion-graphic comic book format that really ads to the game’s atmosphere and energy. The other half of the audio side of things is voice acting, and although mostly great, this is where things falter, if only a bit. Most of the voice acting is top notch, but for some reason the choice was made to give Gabriel’s actions their own narrator. Instead of hearing his sultry, alluring Tim Curry voice, whenever clicking on something, players get an explanation of what they’re seeing or interacting with by a woman with a thick Jamaican (I think) accent. This is initially pretty off-putting, and might leave you wondering just why the choice was necessary, but she’ll grow on you, almost becoming like a character all to herself. Dialogue and conversation are a lot of fun.

Gabriel Knight: Sins of the Fathers is promising indeed. Its story is engaging, and drops enough voodoo lore on you to keep you hooked, offering a ton of information to those interested in hearing it all. The puzzles are engaging and well-done, and so far nothing has felt like a retread of itself. Adventure games can be hard, and the game helps to ease the pain by giving you a cohesive log of everything you’ve done, as well as a hint system, albeit slightly misleading once or twice in the three-ish hours for which I played. We’re hooked, and can’t wait to see the final product of Jane Jensen’s re-imagined vision when Gabriel Knight: Sins of the Fathers’ anniversary edition launches later this year. Find out more on Jane Jensen’s official website. 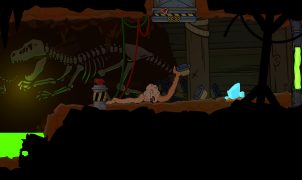 Struggling Review: A Real Struggle Struggling doesn’t make a great first impression. Even after pouring hours into it, I’m not entirely sure I get the full appeal of a…