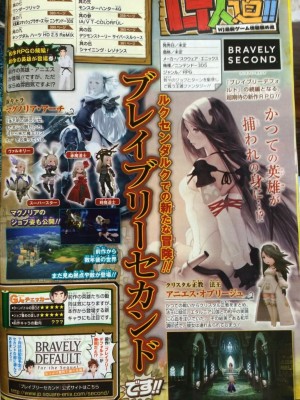 Today’s Jump issue released a small, but relevant piece of information on Square-Enix’s upcoming 3DS RPG, Bravely Second; the confirmation the confirmation of Bravely Default protagonist Agnès Oblige’s. [SPOILER] According to the source, after a period of fighting Angès has the honor of becoming inaugurated as the pope of the Crystal Orthodoxy. It was her desire to bring peace to one and all. While attending the peace signing ceremony however, she is kidnapped. No further information is known at this time. [END SPOILER] Along with the information on Agnès, pictures were once again shown of Bravely Second‘s protagonist Magnolia Arch in several familiar Job costumes; Valkyrie, Super Star (also known as Performer), Red Mage, and Time Mage.

Agnès Oblige, formerly the Wind Vestal, battled alongside comrades Tiz Arrior, Ringabel, and Edea Lee in the first game in the series, Bravely Default, as well as its remake Bravely Default: For the Sequel. While initially extremely shy, stubborn, and naïve, Agnès soon learns that not all is as it initially appears, and changes for the better in order to save all of the worlds in peril.

No release date has yet been confirmed for Bravely Second. Stay tuned for more news on this hotly-anticipated 3DS RPG as more details emerge from the game’s developer, Square-Enix.