The Wolf Among Us To Get Retail Release #TheWolfAmongUs coming to retail later this year on PS4, PS3, Xbox One, and Xbox 360. Release dates to be announced! pic.twitter.com/AojA18jEnG

Rather than buying each installment of The Wolf Among Us seperately, the retail version promises to include all five episode of the Fables-based game. There has yet to be a confirmed release date.

The Wolf Among Us is a graphic-action point-and-click game, based on the DC comic of the same name, written by Bill Willingham. The gameplay is largely focused on story development, and emphasizes that every choice that the player makes can have an effect on the overall story.

About The Wolf Among Us:The Wolf Among Us is a five episode series based on Fables (DC Comics/Vertigo), an award-winning comic book series by Bill Willingham. it is a violent, hard-boiled thriller where the characters and creatures of myth, lore and legend are real, and exist in our world. Your choices matter and will change and define the story you experience.

Batman – The Telltale Series Is Coming To The Switch Next Week 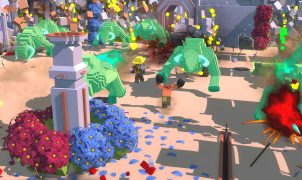