What would you do if someone told you today that in six months it would all be over; that you’d contracted a fatal disease and there was no cure? Would you devote your life to a cause? Would you piss it all away on a drunken bender? Would you tell someone you loved them?

Now, what if the same disease that was going to kill you gave you superpowers – some of them perhaps even godlike in scope?

Death Sentence is set a few minutes into the future, and Europe and North America are in the throes of the G+ Virus. The disease is sexually transmitted and spreads like wildfire with some four million people already affected. For most folks they develop a singular ability, usually tying into creativity in one way or another, commonly resulting in the ability to shoot matter from the hands or perform minor, but effective preternatural abilities. However, some get more gifts than others, and three Brits are about to get more than they ever thought the disease would give them. Verity, can make her artistic visions come into reality with great effect, Weasel can phase in and out of solid state and drip acid from his hands. But Monty, a hedonistic megalomaniac can make people dance to his tune… and explode them if they displease him. All three come together in a struggle to not only determine what they’re going to do with the time they have left, but also the fate of Western Civilization.

This title resonates with a particular comic artist I came across in my youth, Garth Ennis. This comic cleaves pretty closely to his ethos – people put in bad situations with a lot of power, and in some cases with absolutely zero scruples. The villain, a former hardworking comedian turned hardcore hedonist can make people do anything – no matter how self-disrespecting or vile – or face dire consequences. The heroes are flawed, Verity is a woman who has simply pissed her life away trying to make other people happy and wants to do something lasting before the disease destroys her. And Weasel is a washed-up punk rock icon who needs to complete his album before the G+ disease destroys him.  The characters really drive the story here with the powers simply being a natural outgrowth used for their development. It’s well written and flows in such a manner as to keep you reading – I got through the title in a single evening.

Additionally, the artwork provided by Dowling is a good blend. It’s good work that doesn’t spend too much time on an agonizing amount of detail – just enough to keep the flow running the way it ought and with more detail called to scenes where you need it. When Monty starts busting heads – literally – you get all of the gore and visceral impact you’d expect. When powers come onto the scene, the art really starts to shine.

Additionally, there’s cool backmatter as well, which as a creative myself is always a nice reward. Both author and artist set down transcribed conversations discussion their thoughts about what went into the book and the hurdles they jumped while making the book. Artist insight is important, and when you can present it in such a manner as to give the reader fodder for their own work it’s even better.

Death Sentence is a solid title. It covers sex, drugs, rock-and-roll, the meaning of life, and demi-gods that walk among us. I’d recommend it for the Ennis crowd. If you enjoyed titles like Preacher it’s a must read as it retains that sort of flavor to it, minus God, the Devil, and the Host. It’ll be releasing July 22nd, so get your reservations in wherever fine books are sold.

Note: This review is based on an advanced reader’s copy from Titan Books. 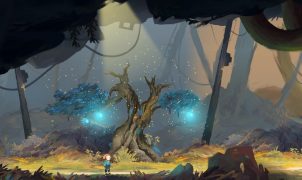