At Microsoft’s E3 press conference today, amidst a slew of OTHER non-exclusive games, a new title in the new, Crystal Dynamics-developed adventures of Lara Croft was announced. Rise of the Tomb Raider appears to be a direct sequel to last year’s incredible prequel adventure, showing Lara Croft struggle with attempts to re-integrate into society and eventually seek more of the scarring adventure that led her through surviving the events of Tomb Raider. There’s no confirmation of it being an exclusive, so we can probably assume it’ll show up on PS4 and PC as well. Rise of the Tomb Raider will be bringing adventure, tombs, and apparently bears to consoles in December 2015. 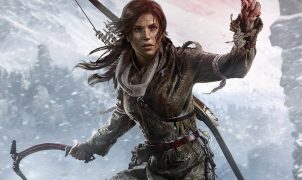