Sony and Ready at Dawn’s steampunk shooter is looking better than ever in this new gameplay footage.

The footage shown offers a fresh look at the game’s stunning visuals, which blur the lines between in-game cinematics and actual gameplay. Plenty of gorgeous particle effects are on display in this brief tour of the game’s third chapter “Inequalities”, and the game’s impressive dark and brooding atmosphere and fantastical weaponry are in full effect.

Here’s a look at yesterday’s stream courtesy of GamesHQMedia.

The Order 1886 is due to land on the Playstation 4 later this year. We’re sure Sony and Ready at Dawn will be opening the floodgates and dousing us in new details on what could be the PS4’s holiday killer app when they show off the game at E3 next month.

So, what do you think of the latest footage of The Order? Let us know in the comments below.

Does The Order: 1886 Deserve An Eventual Sequel? 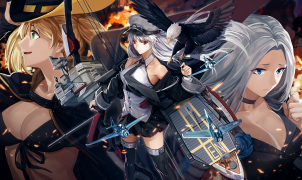 Waifu Wars on the High Seas!   Mobile games are a sore spot for me. Mobile technology has increased to the point that modern phones and tablets are veritable…