A Case of Perfection

Adventure fans, rejoice! After taking an extended 16 year hiatus from cracking some of the hardest cases in New San Francisco,  Tex Murphy is back. Last seen in 1998’s Tex Murphy: Overseer, the trenchcoat-clad star of the classic  adventures Under a Killing Moon and The Pandora Directive had seemingly disappeared into the shadows after developer Access Studios was purchased by Microsoft way back in 1998. Now, with the recent resurgence of the point-and-click adventure genre, Big Finish Games, headed by series creators Chris Jones and Aaron Conners, have  given the snarky P.I. a new lease on life with Tesla Effect: A Tex Murphy Adventure. Does this crowd-funded caper serve as a bold return to form for the beloved sleuth, or was the world’s unluckiest gumshoe better off left in the annals of adventure gaming history?

The sixth game in the long-running series, Tesla Effect: A Tex Murphy Adventure puts you in the well-worn fedora of San Francisco’s most down on his luck private eye. The game begins with the legendary private dick waking up on the fire escape of his apartment at the Ritz to a chaotic scene. Sporting a serious gash on the head and injection marks on his arm, the groggy gumshoe -and part-time dance instructor- begins to realize things aren’t quite right. Not only did Tex take a serious knock on the head, but he also discovers he can’t remember the past seven years of his life. Now it’s up to the the hard-boiled detective to put the pieces back together and uncover the mysterious circumstances behind his seemingly spontaneous bout of amnesia in a case that’s full of far-reaching conspiracies, murderous secret societies, a powerful doomsday device and more classic noir tropes than you can shake a stick at.

The Tex Murphy games have always been fondly remembered for their mix of full motion video storytelling and point-and-click sleuthing, and Tesla Effect is no exception.  True to its mid-nineties heritage, the game features an abundance of FMV which is integrated into both the the game’s narrative as well as the core gameplay experience. While those unable to stomach excessive cinematics may be put off by this, these segments look fantastic and are incredibly entertaining- due in no small part to Tex Murphy’s writer and and on-screen persona,  Chris Jones’ show-stealing performances- and really help to flesh out the game’s exceptionally well-written narrative. While Tex Murphy is undoubtedly the star of the show, you’ll also encounter plenty of familiar faces from Tex’s past cases, who are usually introduced with an entertaining FMV snippet from a previous game, along with a host of newcomers in Tesla Effect. From Louie the horribly deformed but lovable proprietor of the Brew and Stew to the cold and calculating Big Jim Slade, the game’s characters toe the line between comically eccentric and utterly ruthless, and are endlessly entertaining with their solid on-screen performances. 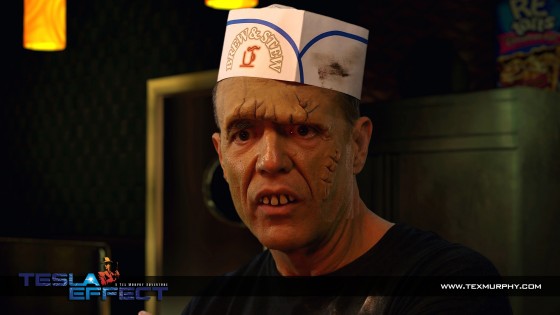 Louie may look scary, but he has a heart of gold and can fry up a mean sewer rat souffle

While the game certainly offers a metric ton of full motion video, the bulk of your time in this roughly 16 hour adventure is spent scouring Tesla Effect’s 3D environments in a first-person perspective searching for clues and solving deviously devised puzzles, which on more than one occasion actually had me digging for a pencil and paper to successfully complete them; a fine accomplishment in a genre that has become decidedly less cerebral over the years. While many of these brain-teasers require multiple steps to reach achieve their solution, Tex offers subtle clues to how to solve the more complex puzzles, ensuring you won’t be left completely clueless as to how to solve some of the more challenging riddles you’ll encounter in your adventure.

There are many places to go and people to see in Big Finish’s post-apocalyptic vision of San Francisco. In your quest to recover your memory, and ultimately the dangerous and highly sought-after secrets the brilliant inventor Nikola Tesla supposedly took to his grave, you’ll explore a wide variety of settings such as run-down Chandler street that plays home to Tex much of the game’s motley cast, a mysterious, pyramid-esque temple that serves as a cult’s imposing base of operations, an eerie marshside manor full of secret passages, and a simply immense research facility that holds the key to Nikola Tesla’s lost research, among other places. While conducting your investigations you’ll need a keen eye to uncover all of the hidden clues strewn about an area. Some of these are extremely well concealed, offering a solid challenge for genre veterans looking to flex their frontal lobes. However, if you’re just in it for the story or need a helping hand the game also offers the option to highlight items you can interact with, as well as a welcome hint system on the game’s casual difficulty setting. 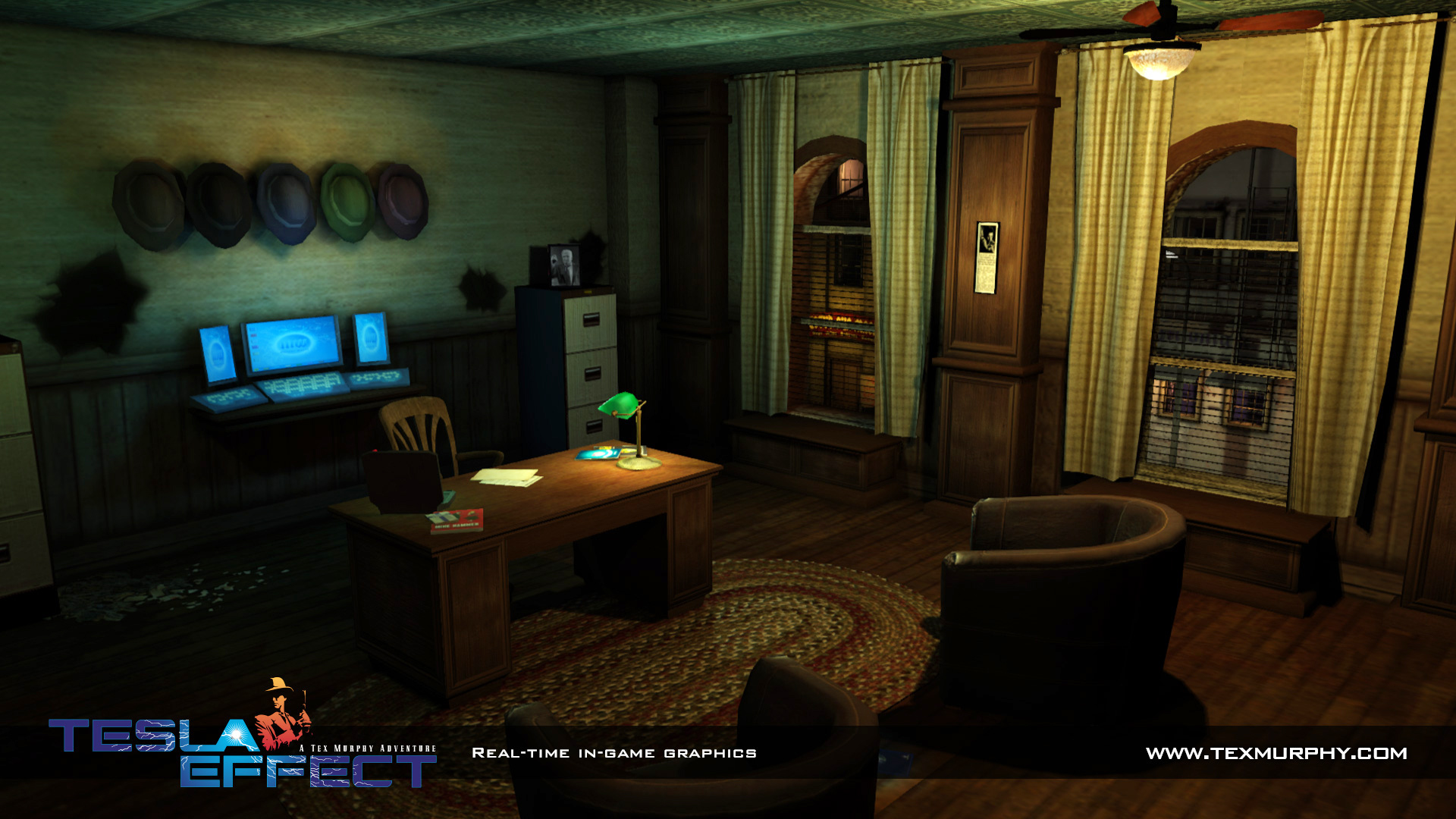 When you’re not solving puzzles you’ll spend a lot of time grilling suspects and witnesses for information. Engaging with characters is done in two ways, both conversational dialog and interviews. When conversing with an NPC you often have multiple dialog choices you can choose from, but oftentimes the descriptions are so vague you’ll likely have no idea what you’re actually trying to say. Thankfully, these choices typically don’t change the way the story progresses with the exception of a select few conversations towards the end of the story. When interviewing characters you’ll be able to ask them for their take on nearly all of the evidence and characters you’ve met throughout your investigation, which in addition to garnering clues on your case also offers unique insight into the world and its character’s relationships. And it’s good to ask all the questions you can, as your curiosity will reward you with score-boosting detective points which you collect to increase your rank after the game’s credits roll.

In terms of presentation, Tesla Effect is a bit of a mixed bag. The game’s full motion video sequences look simply stunning. Presented in razor sharp 2k resolution, Tex and and the shimmering metropolis of 2040’s San Francisco are a sight to behold, straddling the line between vibrant, neon-saturated cyberpunk cityscapes and gritty film noir-inspired aesthetics. While many of the special effects fall in line with the low-budget campiness factor the series is known for, everything looks crisp and is a joy to take in. Unfortunately, this level of sharp visual clarity is jarringly contrasted by some decidedly past-gen visuals when you take control of Mr. Murphy. The busy streets bustling, speeder-filled skies portrayed in the game’s FMV sequences are replaced with largely barren swathes of concrete and dated, low-fi textures that are sometimes downright ugly. Other nagging technical issues pop up from time to time as well, such as clipping through doors and on a couple occasions an entire room’s content vanished into thin air, only to reappear after leaving the room then returning, but these issues happen so seldom they’re hardly worth mentioning.

It’s a shame the same can’t be said for the game’s obligatory stealth sequence, which tasks players with evading flashlight-toting patrols that teeter back and forth between being legally blind and having x-ray vision. While it makes sense in context to the story, the change in play styles feels completely tacked on and and quickly devolves into an exercise in frustration. Thankfully, this segment is very brief and before long you’ll find yourself back enjoying the best things the game has to offer- solving unique and challenging puzzles and unraveling the game’s masterfully crafted mystery.

In closing,  Tex Murphy’s return has been long overdue, but the wait was most certainly worth it. Big Finish Games has struck gold with this deep and engaging sixth chapter of the Tex Murphy saga. Tesla Effect is a resounding success in almost every conceivable regard. Embracing both the slapstick antics the series is known for while simultaneously offering an engrossing story full of clever plot devices and consistently hilarious and witty writing, you’ll be hard pressed to pry yourself from your keyboard from the moment you begin the game until the final curtain call. Add to that the numerous and challenging puzzles littered throughout Tesla Effect and you’ve got the recipe for a caper no adventure gaming fan worth his salt should miss. While a few technical hiccups may scuff the surface of this exceptional adventure, they do very little to take away from this obvious labor of love that stands as this year’s adventure game to beat.

Now let’s hope we don’t have to wait another 16 years for the next case to land on Tex Murphy’s desk.

This review was based on review code provided by Tesla Effect: A Tex Murphy Adventure’s publisher, Atlus