Adventure Time: Explore the Dungeon Because I DON’T KNOW!!! (Xbox 360)

A boy and his dog. A tale that has persisted throughout all of man’s time on Earth. But, few human boys have had a mustard yellow dog that bends across pits, pimp-slaps his enemies, and roughhouses with him through 100 levels of dungeon. That is, until now. 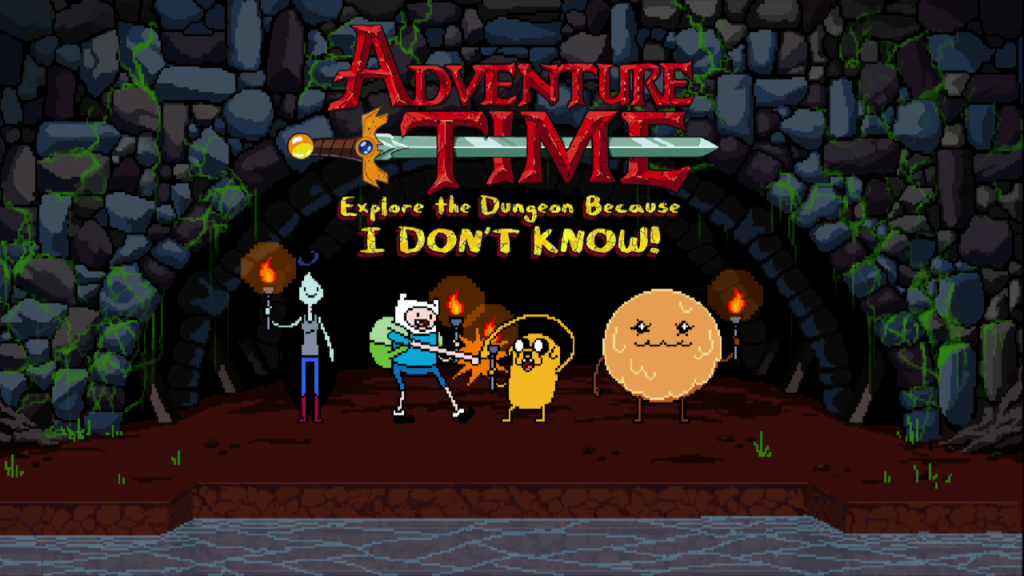 Start as one of three characters – the guy on the right just doesn’t look like fun to play.

You’ve probably met Jake the Dog and Finn the Human already if you’ve ever spent even a little time in front of the Cartoon Network show Adventure Time. They’re a pair of rollicking, farting, and adventuring best friends who live in the faraway land of Ooo, where the days are bright, the chances of adventure are high, and most of the neighbors are sentient food items. Ooo is home of many different kingdoms, most notably the Candy Kingdom, ruled by Princess Bubblegum, and in her long reign, she has thrown many of her enemies into the Royal Secret Dungeon (located conspicuously under a manhole directly in front of the Candy Palace). Her problem is that those pesky enemies are starting to escape. The Princess summons Jake and Finn to deal with the problem, and inadvertently brings along two other of the show’s staples, Marceline and Cinnamon Bun, into the adventure as well.

What follows is a Gauntlet-inspired, whimsical romp through 100 levels of dungeon.

Do you like Adventure Time? If you do, that’s important, because the game really doesn’t have much to it other than letting you take the helm of the show’s characters as they traverse the Royal Secret Dungeon. If you’re not a fan, then it’s just not going to appeal to you. The game is filled with in-jokes and homages to the show as you navigate the dungeon top-down style. 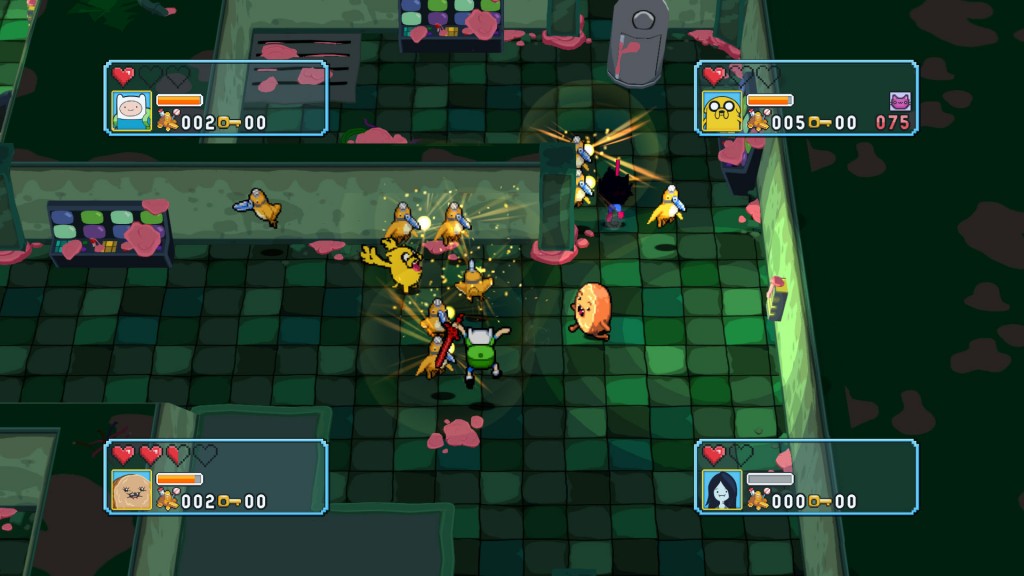 As you progress through the dungeon it’s easy to draw parallels between it and Atari’s classic hit, Gauntlet. There are bone piles and crystal growths that monsters crawl out of until you destroy them. You pick up food items regularly to restore ‘thumps’ (the game’s term for health). There are keys lying around and tons of irritating enemies from the show to fight. It does veer a little from the old Gauntlet formula though. Every couple of levels or so, Princess Bubblegum can beam you out of the dungeon to come up to the surface. When you do, you can talk to citizens of Ooo who can assist you in your quests by increasing stats such as Rowdiness (how hard you fight), Imagination (determining the number of special attacks you get), Thumps (the ability to take punishment), and Focus (shortens the time it takes to charge an attack). 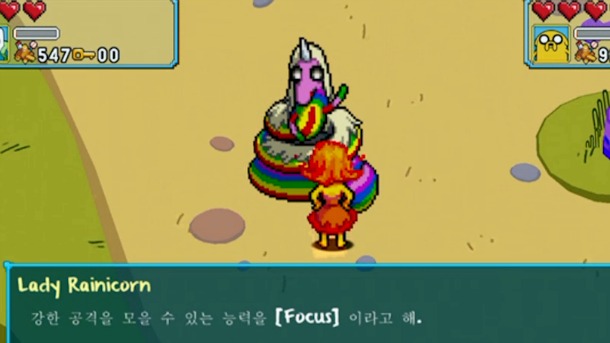 Not that you can tell that’s what focus does since Lady Rainicorn only speaks in Korean – just like on the show.

Each also character has a different advantage – most of which are not directly tied to combat. For instance, Jake can stretch over chasms, Marceline can fly over low walls and pits, and Finn can take an additional token with him through the dungeon. Speaking of which,  tokens can be added to give innate skils (faster movements, more thumps, no knockback from damage, etc.) and special weapons (like the Kitten Gun or a Poot Newt – Poot Newt being my personal favorite so far) to give you an edge when fighting villains most foul. These little nuances give it its own feel and flavor, which really sets it apart from similar forbears in the 80’s and 90’s that the game is emulating.

And, through it all, it’s Adventure Time! And that makes it pretty Mathematical!

Clearly, the game is meant for three types of people: small children, casual gamers, and people who love Adventure Time. The combat is generally repetitive. The challenge is not all that high. Beware and avoid this title, FPS thrill-junkies. As my girlfriend has noted, Explore the Dungeon is like solitaire for gamers – not entirely difficult, but is a good way of passing the time if you just need something light.

Also, my girlfriend and I really want to play this game in a non-solitaire mode together on our XBox… but the curse of the Microsoft strikes again. You want to play with your friends? Well, you better get three more XBoxes (approx $900 for new ones), three more copies of the game ($120), and shell out the cash for three XBox Live Gold ($165). We can’t play the game together, which would seem to me to be a tenet of Adventure Time. There aren’t two BMOs in separate rooms in that tree house from what I can see. And if Adventure Time has taught me anything, best friends should be able to do everything together. Preferably in the same room. 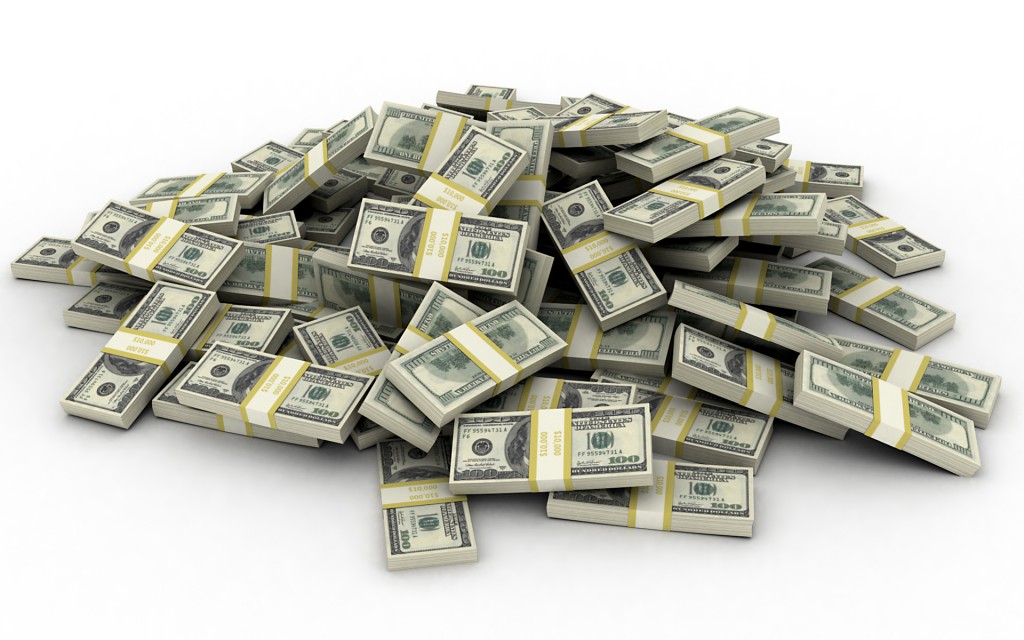 Not an official Microsoft peripheral… but it may as well be.

I suppose it’s not as bad a hit on 3Ds – the platform I think this game was ideally made for, but the 3DS and I… I think we broke up. It was just one more device to charge at night. so XBox it is.

As a fan of Adventure Time, I have to say I’m enjoying the hell out of this title. If I was not already an Adventure Time fan, I have no idea why I’d ever play it. I fully recommend the title to anyone looking for more time to spend in Ooo with the Adventure Time gang though, and for that, it gets three-and-a-half sticks.

This review is based on an Xbox 360 copy of Adventure Time: Explore the Dungeon Because I DON’T KNOW!!! purchased by Hey Poor Player.

Squashing in a winter wonderland!   Pengo is a conversion of the classic Sega arcade game that was originally released way back in 1982. It was hugely popular at…