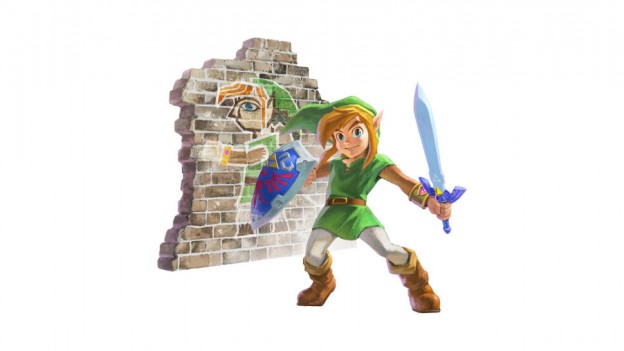 Back when The Legend of Zelda: A Link Between Worlds was first announced, I was struck with an intense amount of excitement. It was a brand new Zelda game, with all new visuals, and a brand new story. Most importantly, it was a brand new LINK. It wasn’t the remake of Marjoa’s Mask that fans were (and still are) clamoring for. It was a new adventure, taking place in the world of A Link to the Past, and that was very exciting to many fans, including myself.

You start off the game in a little house located in exactly the same place Link’s house was in A Link to the Past. This game takes place many years after A Link to the Past, so of course, that Link is long gone. You’re woken up by the son of the blacksmith, where you are employed. You are also late. When you first take control of Link, you’ll find the controls are very smooth and responsive. You’re not tied to a grid, and can wander in any direction you want. 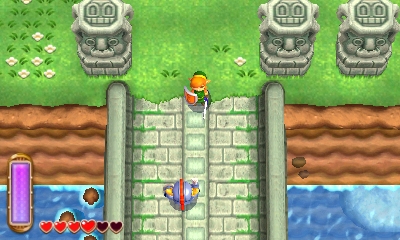 By heading outside you’ll find yourself in a familiar world with stunning visuals. The game brings a cartoony feel and it works exceptionally well. I can’t imagine the game with any other scheme of colors and look. Another thing A Link Between Worlds does well is how nicely it alludes to A Link to the Past. While it’s not the same era, it is the same world, and you can see that easily as you adventure through the land. Kakariko Village is in the same place, full of villagers who will aid you in your quest and give you information. Death Mountain still stands tall above the land, with the Tower of Hera built atop it. You’ll even find the Zoras in their home at the beginning of the river. It’s a great new adventure in a familiar world, and it caters especially to players who find A Link to the Past the best installment in the series.

After some plot things that involve a man by the name of Yuga, who can turn people into paintings, you have a fated meeting with the princess of the land; none other than Princess Zelda. And, as always, she’ll thrust upon you the duty of saving the world. Typical Princesses. After setting off from the castle and heading to the first temple, you’ll see you cannot enter without a bow. But wait, you don’t have a bow! The only thing there is a sign shaped like a rabbit demanding you check out a new shop. That would of course be from Ravio, whom you would have met already. When you head to his shop, which is now set up in your house, you’ll be given the bow, which introduces a brand new mechanic to the series, but we’ll get to that in a bit. After completing the first dungeon, armed with your brand new power that allows you to become a painting on walls, you’ll come across one of A Link Between Worlds’ redeeming features. Instead of going through dungeons in a set order, you can do them in any order you want. Boo-yah. 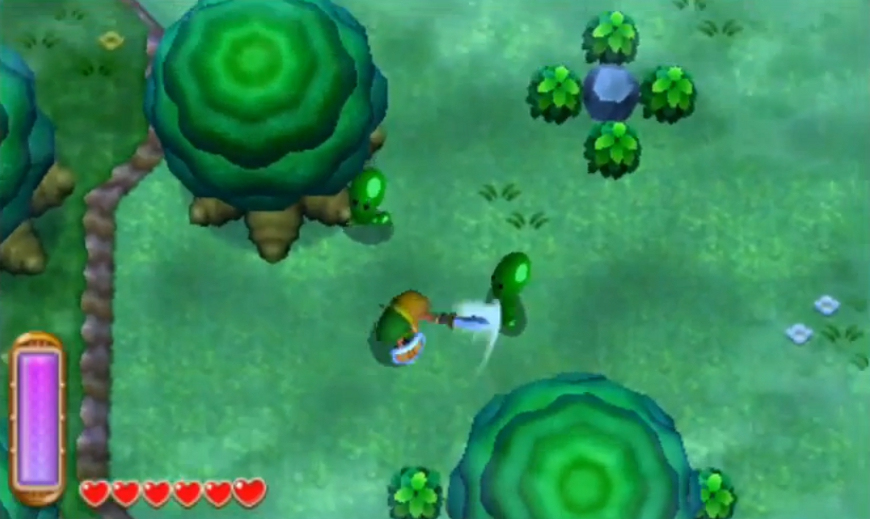 Now, back to Ravio and his mysterious shop! Weapons and core items are no longer found in their own respective dungeon, but can be rented and bought from Ravio. He’ll have nine items available to your choosing, from the bow to various different rods. You’ll know what items you’ll need when you arrive at a dungeon, as it will either have stone pillars dictating which items you need, or you’ll only be able to access it with something specific. In fact, you could tackle on a dungeon with every item available, but, if you die with a rented weapon, Ravio takes it back to his shop, making you rent it again. You’ll be able to purchase them to own later in the game. This feature is quite the game-changer, but the only downside to it is that some dungeon puzzles seemed easier, because they only required the use of one item. There was never any mistake of what you would need to use.

Speaking of dungeons, the ability to tackle them in any order is amazing. It really becomes apparent when you enter Lorule, an alternate Hyrule, and have seven dungeons to choose from. Like stated above, you don’t find that dungeon’s specific item within the dungeon, but you will still come across something in each that will aid you on your quest. Anyhow, after entering Lorule, you’ll see some very shocking plot development, but don’t worry, I won’t spoiler it here. I’ll just let you know… It’s awesome. You’ll be able to travel back and forth between the two kingdoms at will, using cracks that Yuga left when he… well you’ll see. 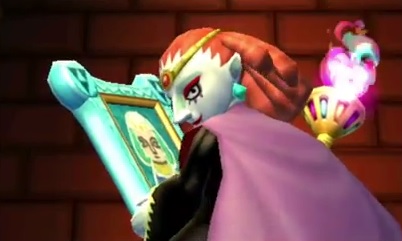 Streetpass functionality is also present in A Link Between Worlds, and it brings an interesting experience. If you talk to Gramps, a resident of Kakariko Village, he’ll explain the functionality. Basically, you can create a Shadow Link to send to other games. It will be a Link with the same amount of hearts, weapon strength, and your choice of two items. When you receive a Shadow Link, a sign will pop up in front of Gramps, and it’ll give you a hint to the location of your new foe. If you defeat your shadowy counterpart, you’ll receive an amount of rupees. If you lose… well then nothing happens. You’ve nothing to lose, and everything to gain. There are 50 challenges tied to streetpassing other Shadow Links, and upon completion of all 50, you get to fight a special enemy.

The rest of the game brings a lot of fun and excitement to the player. Every dungeon brings new puzzles, new enemies, and requires more thinking than ever. A Link Between Worlds brought to me some of my favorite boss battles of the Zelda series yet, notably a Rupee-covered Dodongo. The kingdom of Lorule is vast just like its counterpart, with a lot to explore and discover. And, it wouldn’t be a Zelda game without its amazing soundtrack, with tracks from new to old. The game offers a lot to the player and to the series as a whole, and it’s definitely worth picking up, even if you’re not really a Zelda fan. I would argue that it stands as the best sequel to any Zelda game yet, and the fact that it is a sequel to A Link to the Past, makes that statement astonishing. The Legend of Zelda: A Link Between Worlds is an amazing, captivating experience that hasn’t been seen in a Zelda game in quite some time.

Second Opinion: Breath Of The Wild Is Far From Perfect

Second Opinion: Ocarina Of Time Fails The Test Of Time