Get ready, fighting fans, AquaPazza has finally found its way to North America courtesy of Atlus. This over the top mashup of developer AquaPlus and Leaf’s previous games allows players to duke it out in high-energy fisticuffs with 14 varied and eccentric characters from Tears to Tiara, To Heart and Utawarerumono to see who has what it takes to battle their way through the opposition and realize their ultimate dreams. AquaPazza sports some stunning high-res sprites and a plethora of flashy moves,  but does developer Examu’s anime-infused battle royale have what it takes to fight its way to the top of the fighting game heap? 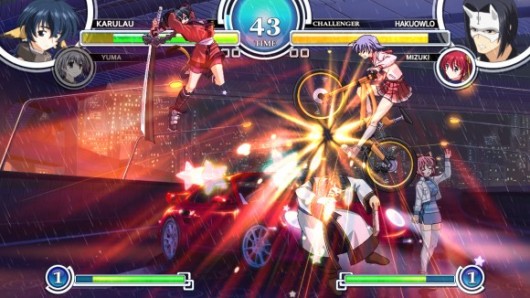 AquaPazza is a port of Examu’s Japanese-only 2011 fighter AquaPazza: Aquaplus Dream Match. Sporting all of the content of the most recent arcade revision (ver. 2.01), the game features 14 fighters (13 out of the box and one hidden) from a AquaPlus and Leaf’s games and adult visual novels. Thankfully, the contestants in this tournament eschew their dating sim roots in favor of a straight up bare knuckle brawl that fans of modern anime-inspired fighters like Guilty Gear and BlazBlue will be able to slip into like a well worn glove. Within AquaPazza you’ll find the obligatory story mode, with a second unlockable story available for each character after they complete the first, along with the versus, online, score attack, and training modes we’ve come to expect from the genre. When you’re not duking it out with a friend you’ll likely be spending plenty of time grinding through AquaPazza’s two seven-bout story modes which are just as over the top as you’d expect from a mashup of Aquaplus’ properties. The first of which revolves around the utterly psychotic Ma-ryan (who reminds me an awful lot of Power Instinct: Matrimelee’s Sissy), who bungles the recipe for a love potion she finds in a library, creating AquaPazza, a world-bending potion that melds the Aquaplus universes together and allows the budding witch to control the hearts all affected by the concoction.

After vanquishing Ma-ryan you’ll be able to use the character you cleared the game with to fight through the second story, which has our characters return for another tournament as they battle to uncover the secrets of an ancient mirror called the Yata no Kagami, which is rumored to possess the power to grant its wielder anything they desire. While it’s nice to have two separate story modes bundled together in AquaPazza, it’s a bit of a letdown that all of the backgrounds repeat throughout both chapters, with the exception of the final boss arenas. This makes the added chapter feel a bit too much like filler than a real, substantial addition to overall package, but it’s still well worth your time, and challenging the Another Story’s main obstacle, the deadly schoolgirl Chizuru, is a real test of skill. Don’t be fooled by her cutesy appearance; that kitten has some serious fangs…and a set of razor sharp claws.

While the writing is admittedly atrocious in the story sequences, the fighting is what matters and the action is as fast and frenetic as you could hope for. The computer does a fine job of pushing the offensive and keeping a player on their toes, while still giving you enough slack in the earlier bouts to experiment with the fighting system’s intricacies. And you’ll need the experience, too. The final bosses suffer from some serious “SNK Boss Syndrome”. For those who aren’t familiar with the phrase, SNK has a nasty habit of crafting boss characters who seem to defy the rules of the game with their punishing difficulty, insane attack priority, and seemingly bottomless power stock reserves. Both boss encounters in AquaPazza can be a real workout depending on what character you’re using, and this is coming from someone who can mop the floor with King of Fighters 96’s notorious baddie Goenitz any day.

Past glories aside, AquaPazza’s story mode is a a fun and worthy appetizer meant to whet your appetite for the game’s delectable main course,  the online slugfest.

AquaPazza’s online portion allows you to play in both ranked and casual matches where you work your way through the ranks from scrub to an esteemed veteran brawler. Each lobby can host up to six players, and matchmaking was quick and easy in my limited time on Atlus’ pre-launch servers. During my hands-on session with AquaPazza’s online matches, we experienced a mostly solid performance with minimal lag, save for one event later in our session that forced a match to end early as we were both booted to the lobby. Aside from that mishap the matches were as fast and kinetic as those in the single-player portion, but matching wits against another human being is the way fighters are meant to be played, and the excellent balance of diverse characters featured in AquaPazza’s competitive bouts make this a wild competitive ride that has the potential to become a tournament favorite. 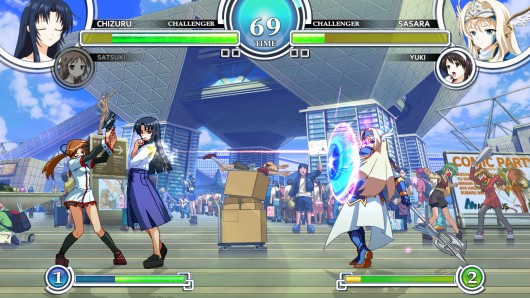 The fighting system in AquaPazza is simple to pick up and streamlined, utilizing three attack buttons that come in light, medium, and hard flavors, along with the ability to unleash a heavy smash attack (medium+hard) to bat your opponent away for some breathing room when the pressure gets to be too much. You can also call in a support character at the push of a button to land a momentary hand in the fracas at the cost of one power stock.

Of course, basic attacks will only get you so far in against your opponents and eventually, you’ll have to bust out the big guns. That’s where proper management of your power gauge comes into play. Typical of other fighting games, as you battle your opponent your power gauge will grow, eventually storing up to five power stocks. You can spend these stocks to unleash devastating and flashy Super and Splash Art attacks, and Assist Cancels.  You’ll find plenty of complexity under AquaPazza’s saccharine sweet facade if that’s what you’re looking for, and mastering the subtle intricacies of the fighting system and character combinations will surely keep even the most punch drunk pugilists busy for days on end. 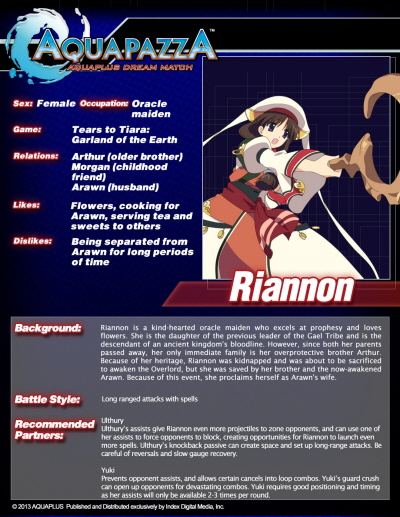 A deep and complex fighting system is no good if a game doesn’t handle well. Thankfully, AquaPazza doesn’t have to worry about offending the thumbs of any seasoned fighting fans. Special moves are easy to execute on the DualShock 3, and anyone who has thrown a dragon punch or hadoken in their day will instantly feel at home with game’s controls. Of course, the added real estate of an arcade stick is always the ideal way to play these games, as shifting from the face buttons to shoulder mid combo can sometimes feel a bit jarring.  Thankfully, the controls are fully customizable, so even if you don’t own a proper stick you can find a way to map the buttons to your liking if this becomes an issue.

Visually, AquaPazza looks fantastic, with large, beautifully drawn high-resolution sprites that are full of details and feature some killer animation. From the explosive looking animations that accompany the bone-crushing Splash Art attacks to the attention to detail paid to the character designs, AquaPazza is without a doubt a pretty game. It’s does suffer in a few areas however, with the backgrounds, while lovely, lacking much in the way of animation with Examu instead opting to go the cheaper route, adding flourishes of particle effects that dance around the backgrounds which take a bit away from the game’s lush hand-drawn look and makes the arenas seem relatively lifeless despite their stunning detail. Also, while the animations are impressive looking and varied, it sure would have been nice if there were more of them, as the transitions between attack and movement frames can sometimes appear pretty stiff. I know not all fighters can be Street Fighter III: Third Strike, but a little more fluidity would have done even more to bring these stunning sprites to life. 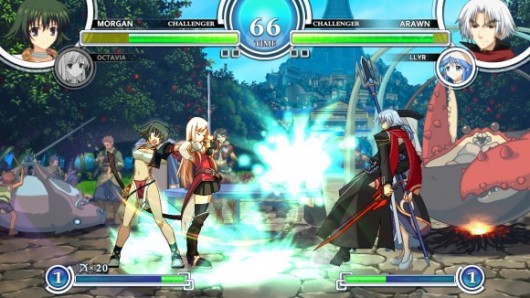 When it comes to the audio department AquaPazza offers a wide range of tunes to accompany on on-screen chaos. Over the course of your bouts, you’ll be treated to epic sounding anthems, riff-laden buttrock, and even some J-pop that all match the scenery perfectly. The game also features some punchy sound effects that really amplify the impact of the digital melee. It’s worth noting however that the game is missing an English dub, so be prepared to be assaulted with some overly hyperactive Japanese dialog (the voice of To Heart’s Sango Himeyuri is a particularly irritating offender), though I’m sure many fans of the genre won’t be especially put off by the lack of an English voice option.

If you’ve gotten your fill of Persona 4 Arena, BlazBlue, and Guilty Gear and are in the mood for a new 2D brawler to scratch that fighters itch, AquaPazza is sure to deliver. While the selection of modes is a bit bare bones, the game’s simple to pick up gameplay make this an easy rumble to recommend, and the underlying complex mechanics under the hood are just begging to be tinkered with and utilized in wild and exciting ways. If you’re looking for the last great 2D fighter of this generation, look no further than AquaPazza.

I score AquaPazza 4 bruised and battered joysticks out of 5.

Note: This review is based on review code provided by the game’s publisher, Atlus.

How does the first Fire Emblem mobile game fare…? Isn’t it delightful to see Fire Emblem finally hit the big time? Famed for its deep strategy, it took over…