The Raven: Legacy of a Master Thief Episode 3 – A Murder of Ravens Review (PC)

Ravenous for the conclusion! After a month of eager anticipation, the conclusion to King ART’s thrilling point-and-click caper The Raven: Legacy of a Master Thief  is finally upon us. After two chapters full of intrigue, murder, and red herrings, the greatest thief in Europe is at long last unmasked! While the second chapter of The Raven largely failed to capitalize on the excitement of the debut chapter, the finale largely manages to recapture the charm and chicanery that enthralled us in the initial investigation.

For those of you who haven’t been keeping up with The Raven: Legacy of a Master Thief, the game is a traditional point-and-click adventure set across the backdrop of 1960’s Europe and Egypt. The Raven, the most cunning crook in the world who supposedly met his untimely demise during a bungled heist in Paris, has mysteriously returned to the scene, pilfering one of the fabled ‘Eye’s of the Sphinx’, a pair of priceless Egyptian jewels from a Museum in London. Now, it’s up to the esteemed Interpol agent Nicolas LeGrand, the man who supposedly killed the Raven, to protect the other Eye of the Sphinx as it makes its way to Museum of Egyptian Antiquities in Cairo to be displayed, and unmask the cunning crook who has seemingly returned from the dead. During your investigation you’ll play as a variety of characters intertwined in the mystery, meet a wide range of colorful supporting characters and suspects, and solve simple logic puzzles in your attempt to unravel the secrets of The Raven. (Note, this review contains major spoilers- read at your own risk!)

The Raven- Legacy of a Master Thief: Murder of Ravens puts players back on board the MS Lydia, the familiar cruise ship from the previous chapters, as Adil who has just made his successful escape from the pursuing Inspector LeGrand and Zellner. From there, players take control of yet a third playable character as they explore the ship’s familiar confines and attempt to gain access to the remaining jewel that’s been secreted away in the Baroness’ quarters. This segment starts off feeling a bit underwhelming by placing the player in a setting they’ve no doubt grown tired of by now, but the new perspective undoubtedly becomes more enticing as you get to see some of the story’s more dramatic moments enacted as the curtain is pulled back to offer a behind the scenes look at the game’s murkier moments, like just what were Dr. Gebhardt’s motives for assassinating the Baroness, what’s eating Inch, and who exactly was pulling the strings on that fateful night in Paris when The Raven supposedly perished.

One of our biggest gripes with The Raven’s second chapter, Ancestry of Lies, was just how little of the The Eye of the Sphinx’s exceptional dialog we’d loved so much was absent from the proceedings. Thankfully, The Raven: Legacy of a Master Thief: Murder of Ravens puts the exposition back at the forefront of the adventure, and the game is all the better for it, as we gain more enticing insight into the game’s varied and often troubled cast and learn the true motivation behind The Raven’s return. Additionally, the puzzles themselves, while still not overly complicated, are a good bit more satisfying than those found in the second chapter of the game. Overall most of the game’s puzzles require a few steps to solve and require a bit more creative thinking, though there’s still some pixel hunting to be done at times, though the game’s hotspot highlighting tool is still only a button press away for those willing to sacrifice their score through the expense of hard-earned adventure points. While Murder of Ravens lays to rest many of my nagging complaints about the last entry in the saga, some technical gaffes that were apparent in the earlier chapters appear once again, and often worse than ever, in the final chapter of the game. This is particularly evident during the second half of the game when Adil is scouting out the Museum of Egyptian Antiquities. For some reason Adil gets stuck on almost every surface and obstacle, until he shambles and shakes like a zombie on methamphetamine before the game seems to throw in the towel and just warp him where you intended for him to go. This is especially awkward when he seems to dive off of a rooftop, only to appear back on the ladder you were descending, and seems to walk into the museum only to appear at the base of the steps moments later, as if swept away by some invisible tide. Additionally, there are some other nagging issues like puzzles and moments that seem to be missing sound effects, though overall these problems seem to only exist during a brief segment of the game. While we’re sure many of these issues could be sorted with a patch (the build we reviewed was a late pre-release copy courtesy of Nordic Games), it’s still disappointing that these issues are still so prevalent months after the game’s initial release.

When the events finally come to a head and the conclusion is in reach is when The Raven: Legacy of a Master Thief: Murder of Ravens truly shines. During the closing minutes of the game we finally discover what exactly caused the formerly careful crook to appear to suddenly transform into a murderous monster, just what drives the cold and calculating Mr. Inch, and who exactly was behind the mask of the game’s eponymous kleptomaniac.

I have to admit that I went into The Raven- Legacy of a Master Thief: Murder of Ravens with uncertain expectations and ended up gorging myself on humble pie. Developer KING Art have once again proven their knack for weaving a fascinating, tightly-woven tale that will stay with you long after the credits roll. Like any great mystery, there is a surprise ending that leaves the door open for a sequel, and we certainly hope The Raven postpones his retirement to treat us to another grand caper in the future. 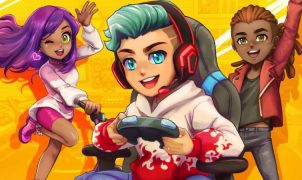 YouTubers Life 2 Review: A YouTuber’s Life for me! Like a fair share of millennials, I can name a slew of YouTubers that I watch regularly; in fact, I…