And thus we float, adrift, in a vast empty space, wondering what secrets the void holds…but we do not consider that on a universal scale, our entire planet of earth could be thought of as a single secret kept form other, similarly space-faring travelers. Such is the vastness of space. And as a single fragment of a single unit in its vastness, if you find yourself adrift and lost, what are you? Are you anything at all?

…Oh. Hi, didn’t see you there. I was just brooding on the vastness of space, as one does. It’s easy to do, simply because space has not just a lot of cool stuff in it, but the potential for a ton more crazy stuff we don’t have the slightest bit of knowledge of. So what kind of secrets are held in the great file cabinet of space? Europa 2022 would like to take a stab at that question.

Europa 2022 puts you in the space-faring shoes of a crewman onboard a spaceship headed to Europa, one of the many moons circling Jupiter. This is the first manned mission to the icy moon, sent out with the intent of searching for extraterrestrial life. When the mission is sabotaged by one of your crewmates, yourself and your remaining fellows must brave the ice and darkness of Europa to survive. But just as two-faced as the traitor among you is the planet itself, as you begin to discover the great and alien secrets the world holds. This point-and-click game strives to balance isolation and intrigue in a single package.

Europa 2022 is a unique case in that its prospects lie beyond the game itself. While the core gameplay is described as a fast-paced, 3D point-and-click adventure game, there is an entire second side to Europa in the form of an ARG, or Alternate Reality Game. Europa 2022’s story is all based around mystery, and the ARG uses websites, cryptography, and a dose of social media integration to draw you deeper into the hidden story of the game, while also giving you in-game rewards for your impressive detective skills. Really, good work there, Holmes.

“Team Europa” is a small one. Dayv Hackenberger is the projects mastermind, and has largely been solely responsible for its development. In the year he has worked on Europa, the game’s prototype version is 75% complete, but has a ways to go. Writing, puzzle design, and a lot of programming all still need doing, not only to finish the game’s beta state, but to make it a finished product. Also of note is the game’s composer, Rich Douglas, notable for his work on the 25th anniversary edition of Shadowgate. Various samples of his work on Europa’s music can be found on the kickstarter page. Dayv’s wife, Caitlin McGrother, is the game’s concept artist, and is also working on a comic book available as a donation perk. Dayv has also sought out another 3D artist to help with character design, making the team a small but growing endeavor.

Europa needs $10,000 to see success. Reward perks include not only the final game, but alpha and beta access, as well as the aforementioned prologue comic book, in both PDF and physical forms depending on how much you donate. Higher rewards include designing posters hanging in the cabins of the ship’s crew, as well as yourself represented as a minor character in the game. If the game can reach far enough out into the stars, its stretch goals include additional sound design, a second playable character, more pages added to the comic book, additional languages, and most excitingly, Oculus Rift support. Dayv has also pledged his project to the “Kicking it Forward” campaign, and so 5% of the profit will be passed along to other developers working on similar projects. Europa 2022 has a planned release deadline of December 2014, and can also be found on Steam Greenlight. Check out the game’s Kickstarter, and check out its satellites orbiting planet Facebook, the Twitter meteor ring, and the great nebula of Dayv’s own official website. May you find life before our own, on that great and icy rock amidst darkness. 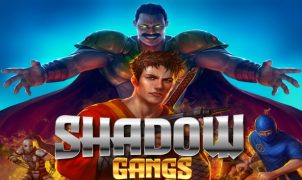