I first got interested in writing because I always found it fascinating the ways in which people told stories. Regardless of the form in which the story is told, be it book, film, or game, the act of storytelling is something of an art in of itself. A strong narrative is one of the most important things in keeping a game’s flow and pace. However, or possibly even as a result, a lot of games fail to play well with narrative. But what kind of tricks can we make our stories do? What kinds of altered perceptions can we create? We all love a good narrative-assisted game, but what about a game-assisted narrative?

Thomas Was Alone is a very simple game at its forefront. You start out controlling Thomas, a little red square moving through a series of minimalist platforming levels. Thomas can move, and Thomas can jump. Those are not a lot of things to do, but Thomas can do them well. He is confident in his abilities, and uses them to his fullest in order to explore more and more tests, in order to satisfy his raging curiosity.

Now stop, you may say. Hold on one gosh-darned second. Why are you talking about this little red block like he has emotions? Well there, my friend, we run into the defining characteristic of Thomas was Alone – the narrator. The entirety of the game’s story is conveyed by a lovely British narrator, voiced by Danny Wallace, who tells the story of Thomas and the various other characters he meets, from the superiority complex-driven John to Claire, whose ability to float in water has convinced herself that she has superpowers. Through the narration, these simple rectangular characters, rogue Ais in a system, have more personality than the characters in many triple-A titles we’ve seen in recent years. The story of the group of AIs traveling through challenge after challenge is engaging, interesting, and occasionally even shocking.

So what is it through which we voyage in Thomas Was Alone? Well, the environments consist of 2D platforming levels, complete with the usual elements such as hazardous water and wall spikes. At first you control only Thomas, but after the prologue chapter you will begin meeting other AIs with whom you have to work. Some levels will give you all of the characters you have met thus far, while some will give you more specific combinations. The most intense levels come late in the game, where you have a total of seven characters to work with. Some differ in shape and jump height, one can float, one acts as a sort of trampoline for the others, and one moves completely upside-down. The game finds impressive strength in its ability to give each of these characters a unique use without making level design based off specific characters too predictable. The only downside is the occasional level of tedium of repetition, but these are few enough in numbers to barely make much impact.

Really, what makes Thomas Was Alone such an impressive experience is a two-sided coin. (has anyone ever heard of a three-sided coin?) One side is the aforementioned narration. On the other, we find the presentation of the game. Everything we see is very minimalist, consisting of black pixel-shaped structures and borders against backgrounds of simple colors. Everything feels easy on the eyes, but not stark or wanting for much of anything. The game is accompanied by a magnificent musical score, creating electronic ambiance and energy in a single breath. All of this combines to create a presentation that would be ruined were it any more complex. 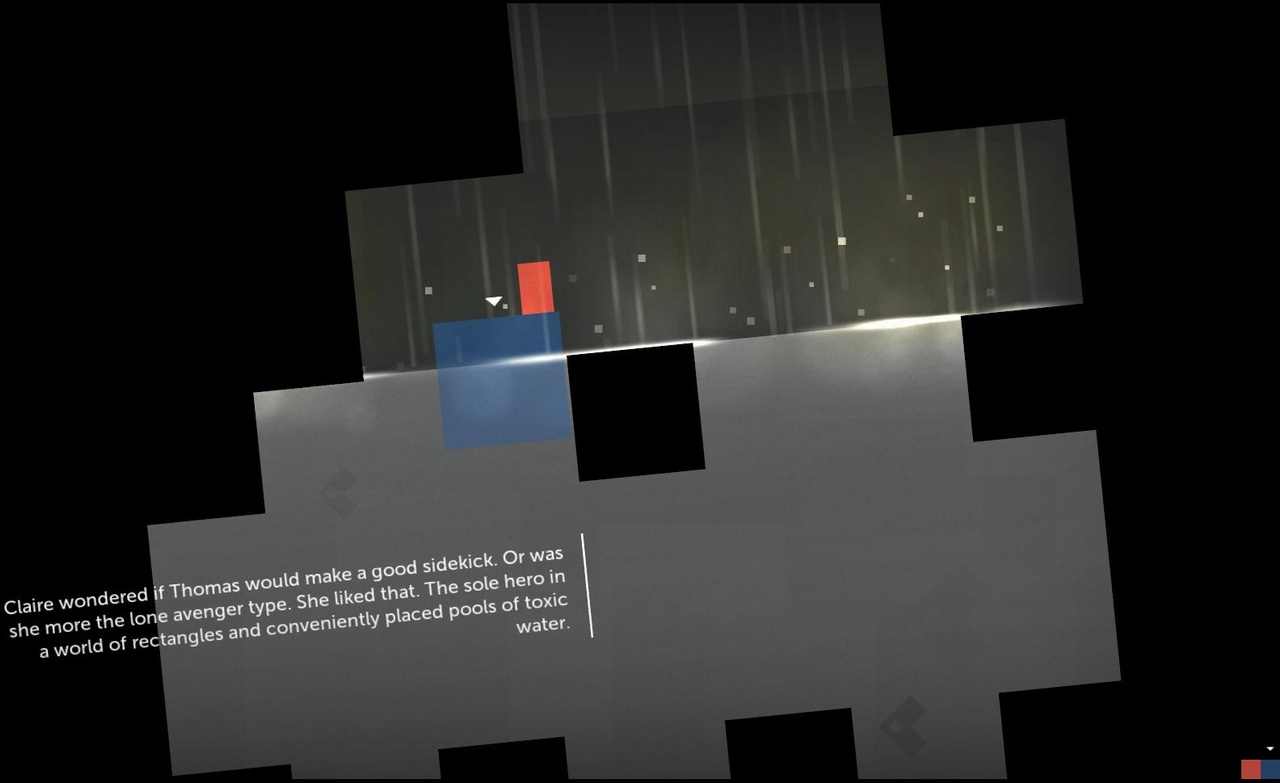 Thomas Was Alone is an exercise in thinking outside the box. If you want to write an engaging story with interesting characters, sometimes the simplest of presentation is exactly the key. I wish there was more I could say about the game, but it really doesn’t require a lot to convey what makes it unique and worth your time. You will care about a group of simple blocks far more than you ever thought possible. The gameplay starts out simple but is a lovely challenge by the end, marred only by a couple segments that feel repetitive or needlessly tedious. Despite an initial release last year, its recent PSN and Linux ports validify Thomas Was Alone’s recommendation as one of the must-play indie games of 2013, as well as one of the best games I have played this year. Inching as close to flawlessness as possible without jumping the gap, Thomas Was Alone gets 4.5 characterized rectangles out of 5.