A whole new slew of information of Pokémon X and Y information has been coming out of E3 these past couple of days, and it seems like it just won’t stop.  Today, a fourth gameplay trailer was shown, and more information about the games were given out.

Players who start up the game will find themselves in Vaniville Town (sounds sort of like vanilla, mmm). Like how in Black and White where you had two friends that traveled with you, this time you have four! Their names are Shauna, Tierno, Trevor, and Calem/Serena (depending on if you choose a girl or boy, respectively). They all have their own unique personalities, which we’ll all grow to enjoy or be annoyed by.

Eventually you’ll make it to the home of our first Gym Leader in Santalune City (Saltine city?). Her name is Viola, and she has a little sister known as Alexa, who is a journalist working for a publishing house in another city, known as Lumiose City (Limousine City?) Viola is the leader of the city’s Bug-type gym. She’s energetic, and she specializes in Pokémon photography.

The trailer revealed all new Pokémon as well. These Pokémon are Litleo, who is a Fire- and Normal-type Pokémon. He’s shown using a new Normal-type move, called Noble Roar, which intimidates targets and lowers their Attack Stat.

Another Fairy-type is Flabébé, a flower looking Pokémon that knows Fairy Wind, a Fairy-type move that summons a gust of wind that blasts an opponent as it attacks.

Scatterbug, which evolves into Spewpa, is a Bug-type knowing String Shot (like most Bug-types do). Eventually, Spewpa evolves into Vivillon, which was shown earlier this week. They all have a pixel feel to them, like Vivillon’s 8bit eyes.

What are you most excited for in Pokémon X and Y? Leave a comment below!!! 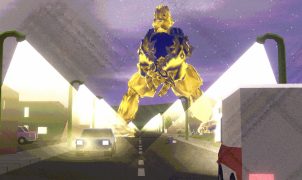