The medieval epic fantasy is overplayed. Let’s just get that out of the way. If you try to sell me a game about a knight running around saving princesses and killing dragons, without any sort of twist, chances are good that I won’t like it. But can such a game still feel fresh without too crazy a change to the genre? What is the element you must bring in to revitalize it? That’s a very big question, but I think a piece of the answer can be found in Fire Emblem: Awakening.

The Fire Emblem series is pretty big. The series of strategy RPGs has had a ton of installments since its inception on the SNES, but none of them made it to the US until the GBA title “Fire Emblem: The Sword of Flame”, released in the US simply as “Fire Emblem”. Since then, the series has received moderate success in the states, hailed as a series of very competent strategy RPGs. So how does this new title stack up? Is it a victorious swordsman standing among a field of dead barbarians, or a pegasus rider shot down by a fateful arrow?

Right off the bat, the first thing to be noted about this game is its stellar presentation. The series has always looked visually decent, but this series adopts a sort of cell-shaded anime style to bring you gorgeous visuals in a style that’s very refreshing in comparison to the look of the older games. The story is presented with beautiful animation, accompanied by a fantastic soundtrack. This is one to play with the sound on, no question.

You can create your own avatar, with limited but passable amounts of customization. Your character is important to the story, but not quite at the center. That honor belongs to Chrom, one of your first allies in the game. Chrom meets the mysterious Marth, who drops through a giant astrological sky portal releasing undead warriors on the land (as one does), and from there evolves a grand drama of kingdoms at war, and great powers at work. It’s very reminiscent of Game of Thrones, with a lot of background politics between kingdoms. Luckily, this is rarely forced into the foreground in an intrusive fashion.

Marth is one suave, sexy swordsman.

The story can get a bit too involved at times, though, so if keeping up with the regal drama isn’t your thing you have the ability to skip all the cutscenes. You can motor through the game without paying a bit of attention to Marth’s true identity, that crazy astrological gate, or anything besides that good ol’ strategy. And that comes to one of the games strengths. It’s a very versatile experience, giving you multiple modes to choose from, which are more than superficial difficulty increases. The game includes Classic Mode, which adds the element of permadeath. On casual, if a unit is killed in battle they will still be usable in the next fight, but in classic you can’t let them die, or they’re gone forever. Besides Chrom or your avatar, all of the characters in your army (and there are a LOT of them by the end) can die and stay dead. If you’re looking for a true challenge, and perhaps enjoyed the Pokemon Nuzlocke challenge once upon a time, this is the mode for you.

The strategy is as good as it gets. You get the grid-based view of all Fire Emblem games and others of its ilk. Differences in terrain give you distinct advantages and disadvantages, and you have the option to view the range of your opponents’ potential movement, adding a level of caution wherever you need it. This allows you to get as aggressive or cautious as the situation requires.

New to this title is the ability to pair up soldiers. Soldiers standing on tiles next to each other, or linked up into a single mobile unit, gain distinct stat advantages in battle, which only grow the more the same two soldiers together. Linking two soldiers onto the same space is great from a strategic perspective as well. You can automatically switch which soldier is in control of the unit, allowing you more mobile tanks, well-protected healers, or whatever else you need. (I would recommend the pegasus/tank combo myself, to protect against the pegasus’ fatal weakness to arrows) Pair the same soldiers long enough and, in addition to turning them into well-polished killing machines, soldiers of differing genders can even romance each other. You have the ability to do this with your own avatar as well, and eventually you can recruit your child into your army. (No, you don’t get all old and stuff. There’s some crazy time travel going on, just go with it) This child will have abilities carried over from both you and your significant other, so choose wisely. The same is true for the NPC soldiers, giving the strangest sort of breeding aspect to the game. 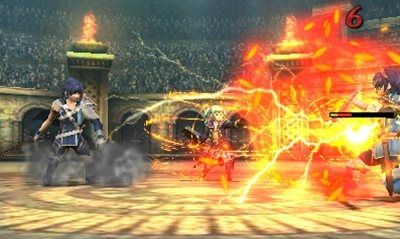 In trying to decide which character you want to woo into marriage, you will start to learn a lot about a lot of characters. The writing and localization is exceptional, and all the characters are surprisingly endearing and good characters. It’s also nice to see the presence of just as many strong female warriors as male. In most medieval games you still see some amount of sexism, which is somewhat inherent to the times of the story being told. At some point a girl will pick up a sword, and the big burly men will laugh at her. But no such thing exists here. There are some stronger and weaker characters regardless of gender, and it’s extremely refreshing to see. There are a lot of beautiful female characters and a couple that could be seen as a bit over-sexualized, but they all have male counterparts. Sexuality regardless, many hot wielders of blades await you on the battlefield.

One fun thing to note about Fire Emblem Awakening is its status as the first 3DS title with DLC. And what’s great is it’s all very cheap. You can buy additional maps and soldiers or 2 or 3 dollars each, or in lovely little value packs tied with a bow for your pleasure. I’ve only had the chance to play one of these DLC maps, but if the games 20-30 hour campaign isn’t enough to satisfy you, rest assured these downloadable additions are everything you could want in DLC. You can even buy soldiers from previous games in the series, adding extra draw for veteran fans of the series.

Even if DLC isn’t your thing, the game is huge. Between the long and incredibly satisfying main story, there are various “paralouge” chapters, little side-missions good for extra grinding, popping up all over the place along the way. And if you’re like me, one playthrough won’t be enough. I first played on casual, but plan on starting a classic campaign with a female avatar. All the different possibilities and customization really add to the replayability of the experience. You can change the classes of your characters and arm them for any kind of situation. Not a single character is objectively useless or quite like another, especially when pairing them with others. Any characters that are remotely similar can become completely unique by giving them a partner. Experimentation is your best friend.

The only gripe to be found with the game is the difficulty curve. Grinding becomes possible more easily after a certain point, but if you suddenly decide you want to start using a character you’ve been neglecting throughout the game thus far, you may find it hard to do. Not impossible, but certainly tricky. Your best bet, at least at first, is to focus on evenly leveling all the soldiers in your party. After a while you’ll get into a regular groove of using certain soldiers, but its best not to take chances early on. If you’re like me, your first judgment won’t be your best guide as far as team structure, so make room for a few mistakes.

Many soldiers, many possible pairings. Never rule out any combination.

Fire Emblem Awakening is the game the 3DS has been waiting for. Throughout its two years on the market the system has built up a fairly impressive library, but until now something had been missing. The Fire Emblem series is something you can pick up, play for two minutes, put down again, and easily pick up again later without worrying about dying due to forgetting where you were in the battle. Everything is turn-based, which is arguably the most inherently perfect kind of game for a handheld. For the GBA, it was Advance Wars. For the DS, it was Pokemon. And for the 3DS, Fire Emblem Awakening is the same way. I’ve left my system on all day long, opening and closing it in little increments in-between things throughout my day, and the game is perfectly tailored to that style of play. Between the wonderful, polished gameplay with detailed but intuitive strategic depth, and the gorgeous presentation of the 3DS, this game truly shines as not only as one of the best Fire Emblem games but quite possibly the best new 3DS game to be released in the consoles life thus far. The story may get a little too involved, but you have the option to glaze over it all if that’s the way you want to do things. The learning curve is extremely easy for new players, and a welcome introduction to new elements for those returning to the series. Shining like a Falchion blade held up to the sun, Fire Emblem: Awakening gets 4.5 time-traveling knights out of 5.

Full disclosure: This review is based on a retail copy of Fire Emblem Awakening purchased by Hey Poor Player. 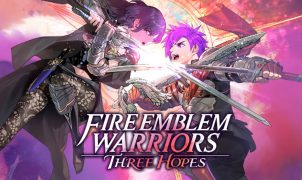