Super Mario Bros and U!

It’s hard to believe it’s been 16 years since Nintendo’s mustachioed mascot helped christen the launch of a new console. New Super Mario Bros. U is the first original Mario title to be released alongside a new piece of hardware since 1996’s legendary Super Mario 64.  Does Mario’s first foray into the world of HD feature all of the excitement of a ticker tape parade to help usher in the Wii U, or is it a re-tread packing all the punch of a wet firecracker? Read on to find out.

New Super Mario Bros. U is the 4th entry in the series to feature the “New” monicker. However, this is the first time the series has been displayed in vibrant high-definition. Right from the opening cut-scene where Peach is, you guessed it, captured by the vile Bowser and his Koopaling brood, it’s impossible not to notice the vibrant colors and razor-sharp visuals that make the Mushroom Kingdom pop like never before. As someone who has never been a fan of the visual style of the NSMB games I can honestly say that the jump to HD has injected a ton of life into the stale visuals of the series. From the splendidly colorful undersea vistas of the Sparkling Waters world to the eerie forests nestled in the Soda Jungle, Mario & Co. have never looked better. 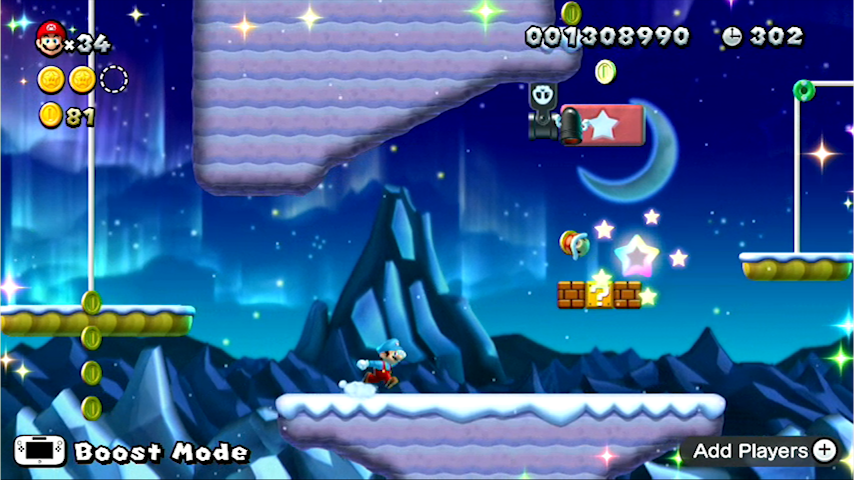 Another thing you’ll notice when you start the game is that the bite-sized, disconnected worlds of the previous games have been replaced by a full world map much like the one in 1990’s Super Mario World. In fact, much like Super Mario Bros. 3D Land embraced the 8-bit generation defining Mario Bros. 3, New Super Mario Bros. U is just as much a love letter to Super Mario World, offering tons of familiar stages and sounds that are much more than a subtle nod to the Super Nintendo Classic.  One of these throwbacks comes in the form of the baby Yoshis. Available in gold, pink, and blue, these pint-sized dinosaurs all feature abilities that greatly aid Mario in his quest to rescue the Princess. The blue yoshi packs the punch of a salivating Super Soaker, gurgling a blast of bubbles that capture both baddies and items alike. Yellow Yoshi is like a scaly supernova, and can light the way through dark levels with a burst of light which also stuns nearby enemies. Lastly, the pink Yoshi can inflate like a reptilian hot air balloon, carrying Mario high above the murderous Goombas and Koopa Troopas below. In addition to the baby Yoshis, the new Flying Squirrel suit becomes an invaluable item in more perilous stages. This suit allows you to glide through the air, and much like Mario’s cape in Super Mario World, you can get a sudden gust of air to launch you higher momentarily. This power-up is especially handy when trying to collect hard-to-reach star coins.

In addition to new items and an overhauled world map, New Super Mario Bros. U also features an all-new Challenge Mode which features a plethora of challenges that Mario must complete. This mode should quickly silence any jaded gamers who think the series has gone too soft over the years as some of these challenges are mind-meltingly difficult. But be careful kiddos, don’t chuck that GamePad in anger, you can’t get a stand-alone unit in stores just yet.  There’s also a new 5-player Boost Mode where the fifth player can control the action via the GamePad, placing blocks for Mario and his Toadstool sidekicks to walk on, as well as using the touch screen to destroy enemies when their Star Gauge is filled. 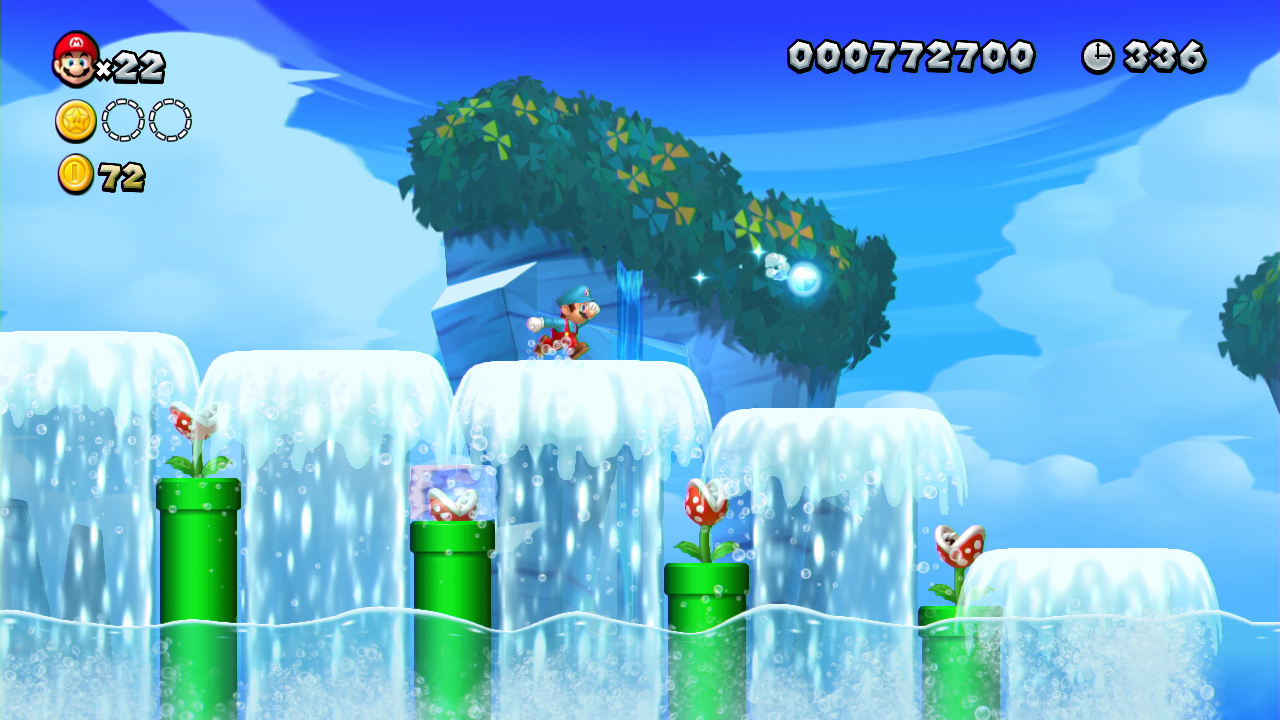 As I said at the start of this review, the upgraded visuals really steal the show this time around. While the HD overhaul does wonders for the character models, it’s the backgrounds that really benefit from the Wii U’s added horsepower. The game’s stages are full of delightful backdrops like the shimmering aurora over the night sky of the Frosted Glacier world, to the colorful hills of Acorn Plains, the backgrounds are fantastic and imaginative.

By now you’re probably asking, “Graphics, shmaphics, how does it play?” I’m glad you asked, it plays brilliantly. New Super Mario Bros. U’s stages are wonderfully designed and feature a multitude of secret paths loaded with power-ups, 1up mushrooms, and those hard-to-reach Star Coins.  Without a doubt, these are some of the best designed stages in the series. These excellently designed stages take full advantage of the new power-ups and Yoshi’s which makes the stages fun to experiment with and master.  Speaking of stages, the world map also offers branching paths allowing you to bypass entire areas of the map, though this doesn’t really make a huge impact on the way you progress through the world, but it’s a welcome change nonetheless.

The Wii U’s GamePad also performs very well in NSMBU. The controls are tight and touch-screen interaction is never forced upon the player. In fact, the GamePad feels even better than the classic remote in that you don’t have to shake the controller to pick up items anymore, you can simply press the ZR button instead, making the controls feel much less clumsy than with the Wiimote. Also, it’s worth noting the game looks just as sharp on the GamePad’s screen as it does on my television, and that’s just awesome.

While the bulk of my experience with New Super Mario Bros. U  has been very positive, there are still a few things that keep the game from achieving perfection. My biggest complaint comes from the sloppily executed multi-player. Anyone who has played NSMB on the Wii can attest to just how frustrating the multi-player can get. Bouncing off one of your spongy-headed allies to your death for the fifth time in a row due to the inability to share the same space on the screen is maddening, and tends to suck the fun out of multi-player sessions quickly. Also,  if you plan to play a 2 player game, you are completely unable to use the GamePad as a controller, which is asinine. Forcing gamers to abandon their pack-in controller in favor of aftermarket, last-generation peripherals is a mind-bogglingly backwards way to promote your new system.

Another gripe I had with the game is while the new baby Yoshi and Squirrel Suit power-ups are fun, the game could have used a few more new items to make things feel fresh. Hopefully the next entry will feature and handful of new items to revitalize Mario’s stagnant arsenal. Speaking of stagnant, the abundance of recycled music from earlier games in the series is a real shame, making the game feel more like a simple rehash than it deserves. 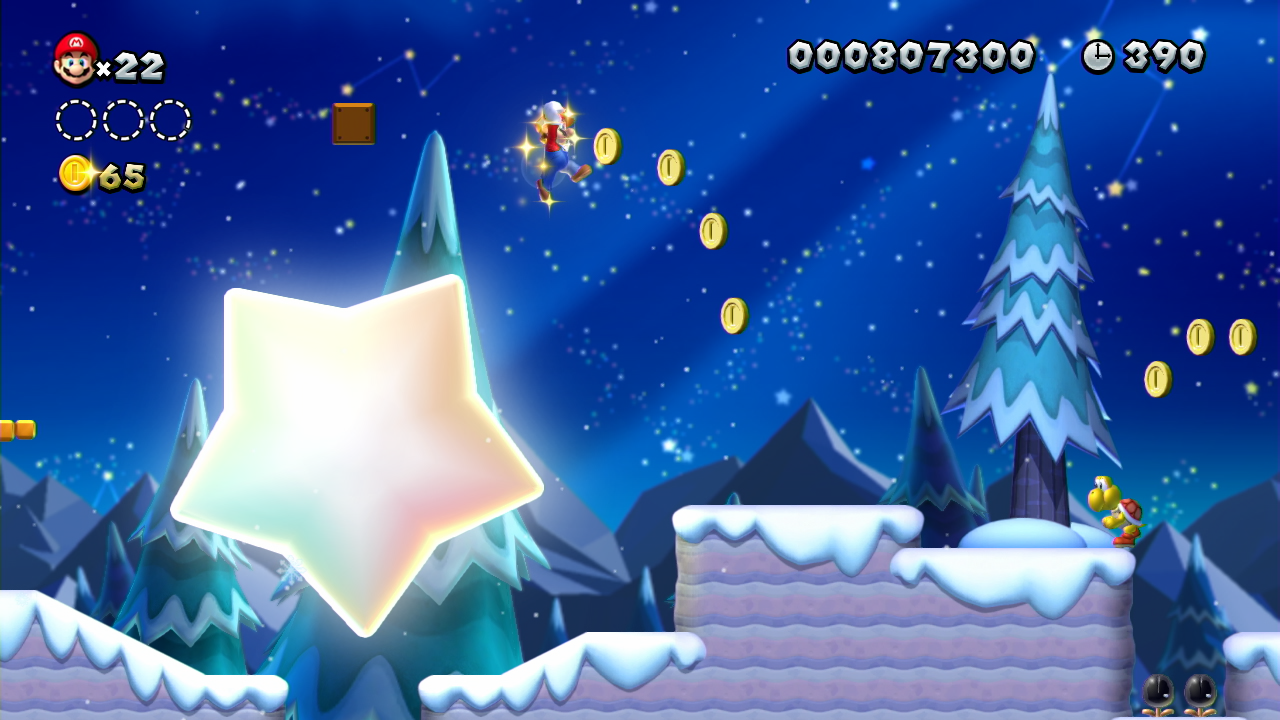 New Super Mario Bros. U is a fine example of 2-D platforming done right, and arguably one of Mario’s finest side-scrolling adventures. While it may not break much new ground for the series, the charming visuals and excellent stage design make this a very solid debut for the Wii U. While the game stumbles in its multi-player modes and suffers from a few too many recycled riffs, the exceptionally executed core experience and devilishly difficult challenge mode more than make up for these minor shortcomings, earning the game a solid 4 out of 5 sticks.

Have you got ants in your pants? The most interesting thing about Ant Eater, a fairly obscure game for the Atari 8-bit computers, is that is was programmed by…