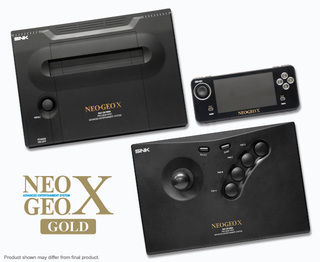 Today Blaze IP, makers of the upcoming NEOGEO X, announced a special “Gold” limited edition version of the handheld available for early adopters who pre-order the system before its official December 6th release. In addition to the 20 Neo Geo games that come pre-loaded on the handheld, the Gold package will also include a game card of the 1996 weapons-based fighter, Ninja Master’s, at no additional cost.

For those unfamiliar with the NEOGEO X, the console is a fully licensed handheld version of SNK’s legendary 16-bit powerhouse, the Neo Geo. The system is pre-loaded with 20 of some of the Neo Geo’s more memorable games, and can support game cards (SD Card based versions) of other releases.  The handheld is pricey, at $199.99 (Neo Geo fans should be used to this) but features a plethora of bells and whistles that should make any SNK fanatic drool.

To get the NEOGEO X Gold Limited Edition console you must pre-order it from one of Blaze IP’s preferred vendors.  Here is a list of U.S. vendors currently taking pre-orders for the Limited Edition bundle.