I may be marking myself as a heretic again, but Skyrim just doesn’t do it for me .

This doesn’t mean I’m not in for a little sword and sorcery, but I let Skyrim Fus Ro Dah right by me and took aim at a few other titles. The local GamePawn provided a surprisingly generous $40 trade in – probably because people like BestBuy are making their trade in values visible right on their webpage – and picked up another fantasy title that looked like it had straightforward gameplay, a color palate that was a little bolder than Skyrim’s and had a good vibe on Penny Arcade. It cost $20 after trade-in and I could always borrow Skyrim later from one of my buddies.

So now, as a result, you get a review.

The game comes with a few credentials. In addition to having good things said about it by Gabe and Tyco at Penny Arcade, it features a storyline written by R.A. Salvatore, who knows a few things about stories. If you’re into that sort of thing, it also features art by Todd McFarlane. It was enough to get me to buy it on the cheap since two out of three ain’t bad.

It seems to be your stock-in-trade fantasy world. There’s a decade long war on between malignant Winter fae creatures and… everybody else. Things are going from bad to worse, and a small group of Gnomes with a morbid interest in the dead have finally managed to bring a test subject back from the dead in every sense of the word via the Well of Souls. 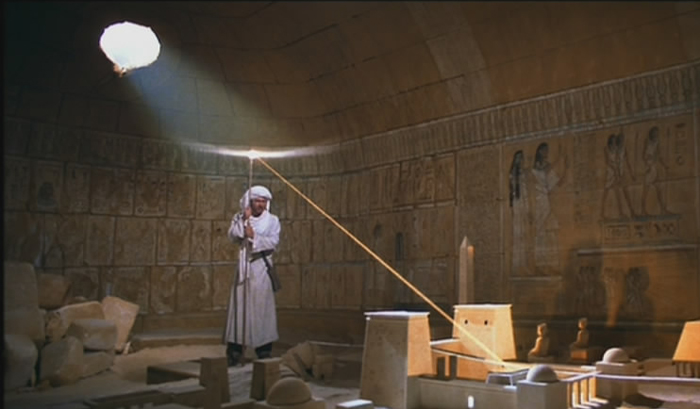 Not the same thing, but it was my first thought too.

It turns out the whole process not only brought you back from the dead, it also altered you in ways that fundamentally change fate itself. As it turns out, the denizens of Fae really don’t like that kind of thing as they fancy themselves in charge of this whole fate thing and they hold the monopoly on living forever. As a result, the Unseelie fae of the Winter Court send out warriors to correct that mistake, Dick Jones style. 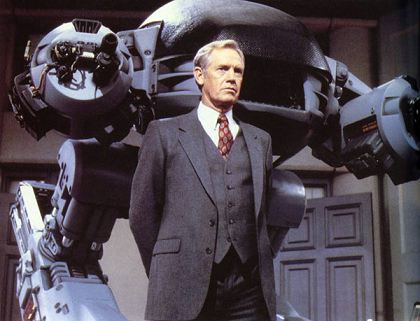 After the Unseelie Tuatha thoroughly kill the shit out of everyone in the Well of Souls but your character (I named mine after Gabe’s WoW character, Dudefella), you stumble out into the Kingdoms of Amalur, completely bereft of any memories of your past life.

So, I do what any other amnesiac with a sword would do. I start beating people and creatures up for money. Because that’s how I roll.

As I navigated Dudefella through Amalur, it took me a bit to grasp some of the finer points of the game. When you hand me a controller and let me control a guy with a sword through a dungeon, I tend to approach it about the way one would expect – brute force. After a few minutes of gameplay, I get my first level up and the mechanics present themselves.

Anyone who’s played World of Warcraft for a day is familiar with the Skill Chart. Charts like this give you various ways you can customize your character in the game so as to enable the kind of playing style you prefer. However, KoA: Reckoning appears to have eschewed the largely linear WoW model in which you pick one tree goddammit and woe betide the guildie who does not bend to the whim of their guild master for the win (and DKP). KoA:Reckoning seems to be perfectly fine with giving you three separate categories, which then split up into multiple paths of their own that it would seem one is encouraged to mix and match their abilities. It’s incredibly customizable. Right now, Dudefella, at level eleven, has a fairly even spread between Might, Finesse and Sorcery. He specializes in Chakrams (an awesome mid ground between in close-range ass-whooping and long range beatdown), but also knows a hand full of spells and combo chains that give him a little versatility. He’s also got a smattering of stealth related skills so as to be able to be subtle when it’s called for. 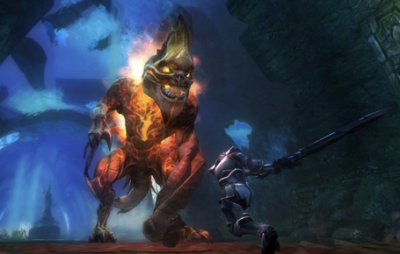 Yeah. This is about my level of subtlety.

But that’s not really where we stop with the skill charts – oh no, they have skill charts all up in this thing. There’s a Mass Effect-style interface at work addressing non-combat stuff like Alchemy, Persuasion, Lockpicking and the like. The only complaint I have with the non-combat advancement is that while the combat chart advances very, very quickly (three points per level), non-combat skills advance at a deplorably slow rate (one point per level). In this way, it favors combat over anything else. Then again, anyone who ever played these games to find mats is either in a third-world country or in need of therapy. Perhaps both.

Now, while the Skill Chart isn’t really new by any stretch of the word, I imagine R.A. Salvatore doesn’t get involved if there isn’t something in there that a gamer would recognize from D&D somewhere. In this case, they have Destiny Cards that you can select from that resemble fourth edition’s paragon classes. Destinies are unlocked by reaching certain pre-requisites (my guardian for instance needed 6 Might and 6 sorcery in order to unlock) and as such, there are certain benefits and privileges conferred for all sorts of combinations between the three broader skill categories. Better still, at any time you can determine that if your present destiny sucks, well… change it. There’s nothing saying you even have to dedicate yourself to one destiny. Dudefella is the kind of guy who can change fate when he damned well feels like it.

Speaking of which, you can go into Reckoning Mode as well. It functions essentially the same as ye olde Limit Break from Final Fantasy VII, except it doesn’t care how much damage you take: it cares how many opponents you defeat. Every time to you take out a baddie, your Fate bar increases. When it maxes out, you turn into a medieval murder machine. In Reckoning Mode, the screen hazes over into a dark shade of purple and you have a set amount of time to take down as many opponents as you can and then rip the very fabric of fate away from a chosen opponent (preferably the biggest, most impressive looking one) as they lay dying. It boosts the XP not just for the main opponent but for anyone who took a dirt nap whilst in Reckoning mode. How much XP is harvested is determined by a button mashing feat that is incredibly difficult for me as a thirty-ish year-old man to mash out. This is not called execution. It is called Fate Shifting. It’s also kind of sweet. 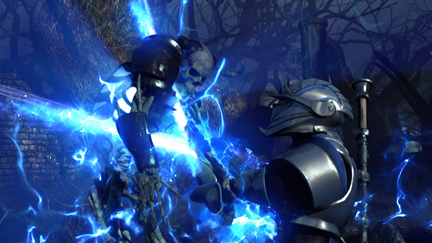 Yeah, that’s about my level of subtlety.

It does however separate itself from the rest of the pack by the way it addresses combat. It kind of looks WoW influenced, but it sure doesn’t play like it. The actual fighting itself is a blend of Devil May Cry, Dynasty Warriors and Darksiders, making use of combo tactics, shifting camera views and weapon selection.

Everything else though is fairly off the rack: Elemental bonuses. Equipment slotting. Getting rid of old gear and repairing it. Deciding whether or not you let Bob NPC live or die by your hand. The Sagecrafting options results in gems which sound suspiciously like Materia. There’s forges and alchemy stations where you make the standard potions, weapons and armor from the resources you’ve farmed. You’ve done all this before. That said, it’d be silly to expect something wholly new from our games. Much like storytelling itself, it’s all been told before – we just pretty it up with people we like to pay attention to. And a lot of button mashing. And explosions.

It’s like someone at Big Huge Games decided ‘Hey, WoW is kind of full of overbearing douchebags sometimes. Wouldn’t it be nice to have a single-player mode?’

And then they made it.

So, while the game is derivative  from what’s out there on the market now to an understandable extent, it’s also fun. It’s playable, though combat can be tricky until you find out the best way to Feng Shui it to taste. It also evaporated about seven hours of my life away during my hard core evaluation phase, so it must have some allure or I would have dropped it by now. It’s very highly polished (though facial expressions for the characters tend to be kind of wooden), they put a fair amount of effort into story and gameplay and I can think of worse ways to pass the time. I’m digging it so far and would give this a solid four. That’s my story and I’m sticking to it.

This review was based on a retail copy of Kingdoms of Amalur: Reckoning purchased by Hey Poor Player.