I saw Blade runner for the first time when I was maybe eleven years old. I didn’t really get all of it, but the parts that were important to an eleven year old I could understand (which at that time was boobs, which are still pretty awesome well into my thirties). Supercharged androids, Han Solo playing Boba Fett, improbably high-powered handguns, the ever-present conundrum of what constitutes life. I loved Blade Runner.

And now I get to play it and have an understanding of what it would be like to really live in a free market unfettered by regulations of any kind!

Syndicate is a next gen console reboot of the original 1990’s intellectual property. In the future, megacorporation power has outstripped government power. They offer you everything you could want and more, so long as your cred is good and you’re willing to do whatever your parent corporation tells you to do. Almost everyone of means has been implanted with one sort or another corporate cyberware to enhance the world around them… and also to make sure that good little drones keep consuming and kowtowing to the bottom line. When problems arise between megas though, Agents are deployed. Agents are there to retaliate against all sorts of wrongs (real and imagined – or deniable) with extreme prejudice. 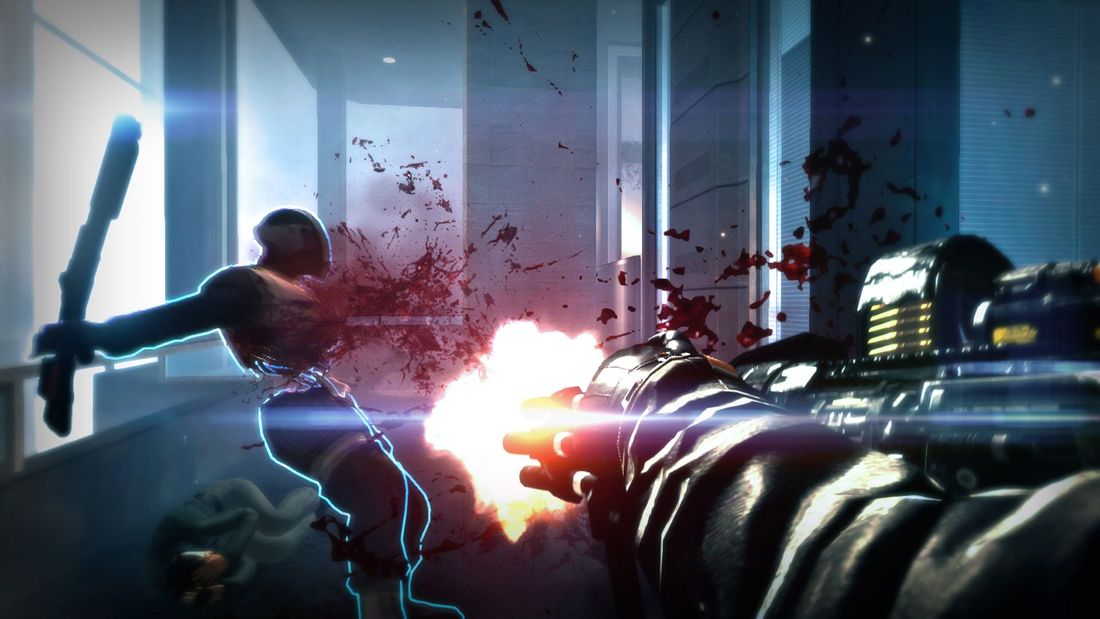 This was not called execution. It was called retaining dominant market share.

So, basically, it’s just like now – mercenary sensibility, corporate skullduggery and the relentless pursuit of profit, but with more implanted technology and paramilitary forces. The gloves are off kiddos. And the Syndicates mean business.

I came into this title fresh, sadly. I was that kid who grew up without a PC, so I never got to play the original. So this was a sort of brand new thing for me. Dark futures rife with corporate douchebaggery are like mother’s milk to people like me though, so I knew what I was getting into when I bought it. I was going to play a bad person using violence against people who stood in the way of my employers making an obscene amount of money. And with that said, I went in swinging. Sort of.

The controls take a little getting used to and adhere mostly to the conventions of the genre, though there’s a little more Mirror’s Edge in it than I was expecting to see (a good thing as ME rocked) in terms of design and functionality. The visuals have a super clean sheen in corporate zones, though urban hellholes have the right amount of metropolitan decay and rot. The lighting is also pretty amazing, and channels Blade Runner hard in the opening tutorial level.

There’s also a pretty dynamite cast that went into this that caught me by surprise. Rosario Dawson is starring as Dr. Drawl (love interest and Jiffy Lube technician for cyber grunts like your agent), and Michael Wincott as the morally bereft Agent Merrit. To round it off you get Brian Cox as Jach Denham, the manipulative suit who gives you your marching orders. 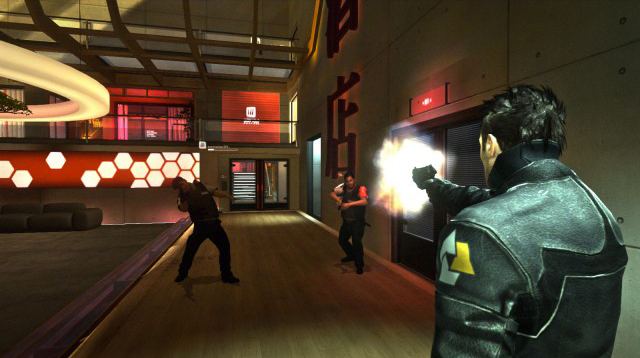 And when those orders say civilian casualties are acceptable, Michael Wincott kills the shit out of civvies.

Not everything was super intuitive at first (breaching took me a little while to figure out what I was doing) and it’s not always super obvious what doors you can open and what’s there for window dressing. I fumbled around a lot on the first night of play and got myself killed. A lot. But, after the brief learning curve was addressed, the game began to get fun.

There are a couple of features that inherently make Syndicate what it is. Not all of them are super original, but they lend to the flavor and theme of the game.

The first obvious one is DART 6, a proprietary chip that Eurocorp Agents have installed into their brains used to interface with the world via Augmented Reality. It lets you see technical overlays that indicate technologies, or even opponents with chip implants, that may be ‘breached‘. Breaching can do all sorts of things from the utilitarian (moving elevators, downloading propaganda) to the catastrophic (overloading engines or weapons and causing your opponents to auto-Darwinate). 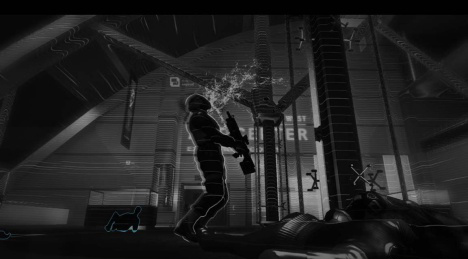 I’d say he regrets nothing. But… no. He regrets pulling that rifle on me.

In addition to compelling suicide in your opponents, it also allows you to access an overlay which causes your adrenaline to spike and resultantly slow down your perception. It also greys out the environment and highlights any enemy you’ve seen (behind cover or not), allowing you to better focus on the hapless vict… uh, corporate rivals you’re looking to murd… liquidate.

The process by which you interact with mundane, non-killable things is very straight forward: target the reticle over the desired opponent/item and hit the left bumper. You then get a Gears of War style reload bar and it works exactly like GoW does, save for there being no penalty if you go over the narrow space indicated for an optimal breach (which is called a ‘spiked breach’).

There’s also a little sub-screen that anyone who played WoW for more than a couple of minutes ought to be familiar with: an upgrade tree. From there you can upgrade the DART 6 chip to do all sorts of things. There’s no order to the enhancements to choose from. Simply take what you think would be useful and optimally grow it out from there. While you can technically upgrade al over the path, doing things that link adjacent to one another make for better abilities. Right now I’ve opted for getting more adrenaline more quickly and being able to stay in the overlay for longer periods of time.

So, as you can see, there’s nothing really original going on here, but everything compliments each other and works as a cohesive whole.

The game was released yesterday at the time of this writing, so it’s a little too soon to give an adequate summation of the game. It’ll be short in arriving though, because I can tell you one thing right up front. This game is Blade Runner at it’s core. Morally ambiguous people doing questionable things for all sorts of reasons, most of them bad. I’ll be playing this game a LOT something tells me, and when I’ve got enough under my belt to tell you what’s going on, you’ll be the first to know. This is what the internet is for anyhow – putting out partial information in as hazy terms possible then coming back later to finish it.

In other words: I’ll fix it in the patch.