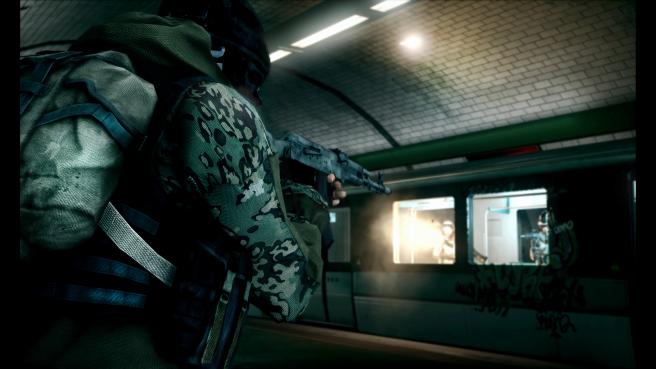 Friday I downloaded the Battlefield 3 Beta for XBox 360. Being the highly anticipated game that it is, there are already a plethora of articles all over the internet on this game, so I don’t want to spend too much time covering the same features they have. Needless to say, the sound is phenomenal, the scenes are beautiful, and the visual effects are everything we’ve come to expect from DICE in the other battlefield games.

The rest of this post will focus on some of the things I saw that were not in other articles. 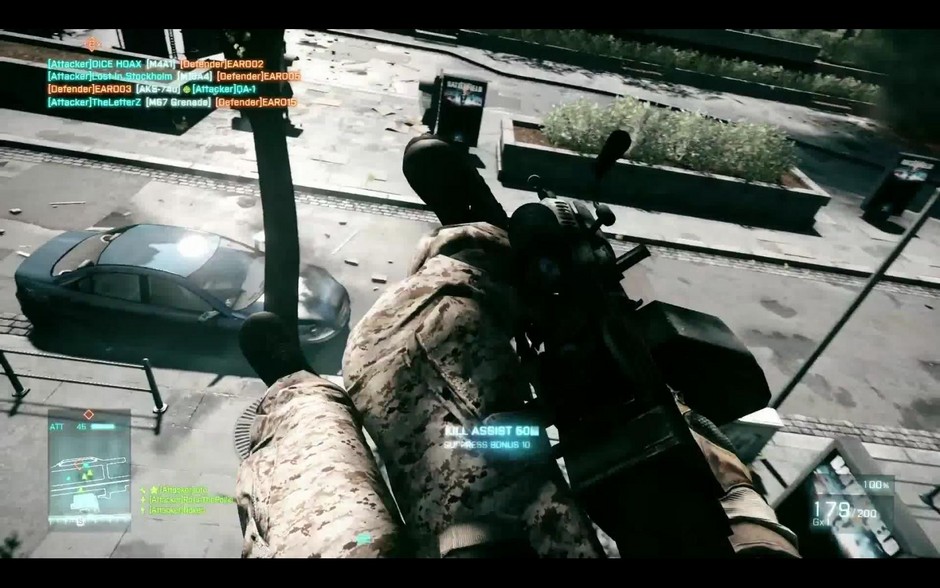 Animations: Did my guy just lazy vault over that fence? Yup, sure did. Apparently someone from the Mirror’s Edge team snuck into the Battlefield 3 meeting and made your soldier interact with his environment in sensibleways. Gone are the days of strafe-jumping ever obstacle like it’s a box and your hands are glued to your gun. You vault fences, climb walls, and generally act like a real human being. Running looks more like running and less like power walking and you reach for the sky as you cling to life when you’re shot.

Prone: This is an area that the newer Battlefields have fallen short on. That’s OK though, because Battlefield 3 lets you go prone and makes it really matter in gameplay. Like other shooters, being prone steadies you and makes you a smaller target. This is extremely important in the support role with LMGs though. I couldn’t hit the broad side of a barn from the inside with my LMG on the move. Prone I was an a force of destruction. It forces the support role to take a position and own it. Suppressing fire takes on a whole new meaning as one or two support troops can completely dominate any through-way.

Classes: The change in classes really threw me at first, since they didn’t change much in Bad Company and Bad Company 2. Once I got used to the changes though, I’m much happier with them. Here’s a quick run-down:

Assault: The assault class still focuses on the automatic rifle with iron sights or low-powered scopes and they’re still your best option for getting into the enemy base and you have enough firepower to hold it once you’re in. They give you healing back in this installation, but it’s in the form of the med-pack (like support had in BF:BC2). This means that not only can you heal yourself, but you can heal you buddies on the front line as well. Similarly, your first unlock for assault is the defibrillator (previously also owned by support) to resurrect your dead teammates.

Support: “But why can’t the my support buddy heal me?” I hear you cry. As I just mentioned, the support role has really changed. You are now a stationary grim reaper. Find a defensible position with a good view of a wide hallway the enemy will likely come through and rain down bullets. You swapped kit with the Assault class this game. Assault got the healing, and Support gets the ammo boxes. This was definitely a good call. You’ll be back with the other support guys and the Scouts who still think they’re snipers. That’s who needs the ammo anyway. If your Assault guys live long enough to run out of ammo, either they or the enemy are doing something very wrong.  That said, once it’s time to advance or retreat, get up and get your troops their ammo for the next push.

Engineer: This class is still a sort of jack of all trades – the red mage of FPS games you might say.  The MP5s and other SMGs (or PDWs in this game) give you some good close-up firepower, but only at close range and the Assault class is still king of run-and-gun. The rockets are still the best anti-tank weapon and it seems like they’ve been modified to be a bit more effective against infantry in cover. The neat new feature I’ve seen is a little robot that tools around. It’s for repairs and I don’t have it, but I’ve never been shot by one, so I don’t think it has weapons. It would let you stay in cover while you repair your teammate’s vehicles though, and that’s worth its weight in gold.

Scout: Not a sniper… really. DICE has been saying this for a while, but in this game they change the class so you really lose out if you hang out in the back and play sniper. There very first gadget you get with this class is a radio beacon that acts as a mobile spawn point. As a Scout, I grab a shotgun (which you unlock for all classes pretty early on) and I get my butt as close to the m-com station as possible and drop one of these babies in an area of cover. Keep in mind that these can be destroyed though, so don’t put it out in the open where the enemy can see it.  Now your whole squad can resurrect 10 yards from the objective – win. (Note: remember to look out for these when you pick your spawn point. It does no good if no one uses it.)

Environment: Battlefield has always been king of the environment. I don’t just mean pretty backgrounds and waving grass (though that’s nice looking too). I mean the havok as the battle tears up your surroundings. Bad Company 2 bragged that everything was destructible.  Battlefield 3 found the stuff that BC2 missed. Not only does everything show the signs of the battle you’re fighting, but things break in different ways. I’m reminded somewhat of the destruction in Force Unleashed. When something breaks, I know if it was glass, wood, or metal. I once took cover behind a wall corner and was amazed as I heard the clink of bullets shattering ceramic tile and watched the tile break off of the wall.

Debris is the other thing that makes the environment. Rather than the normal explosions from a grenade, I was delighted to see my grenade throw the resting debris in the room with its shock wave.

Those are the big things I didn’t see in other blogs. The beta runs until October 10th and is free to download from XBox Live, PSN, or on Orgin for PC at www.origin.com.

Last, for people new to Battlefield, here’s an awesome video on how to adjust to the different gameplay in the Battlefield series. It’s for Bad Company 2, so it’s a little dated, but most of it is spot on:

How Not To Be A Noob in Battlefield