I find that as I get older, I come to like games that are simpler more and more.

It used to be that I loved the rich layers of complexity that certain games gave you. I liked slotting Materia, going on side-quests, playing mini-games and learning the backgrounds of beloved characters. I guess blowing shit up in the flashiest manner on purpose eventually crowds all of that out. That must be it. Perhaps, this makes me a serial vehicular homicide machine? Nah. Just makes me human. Most people I know tend to lean towards games with big explosions on their own without my help, or the help of Kurt Russell in ‘Deathproof.’ Or maybe that’s just cause it’s what’s marketed to us. 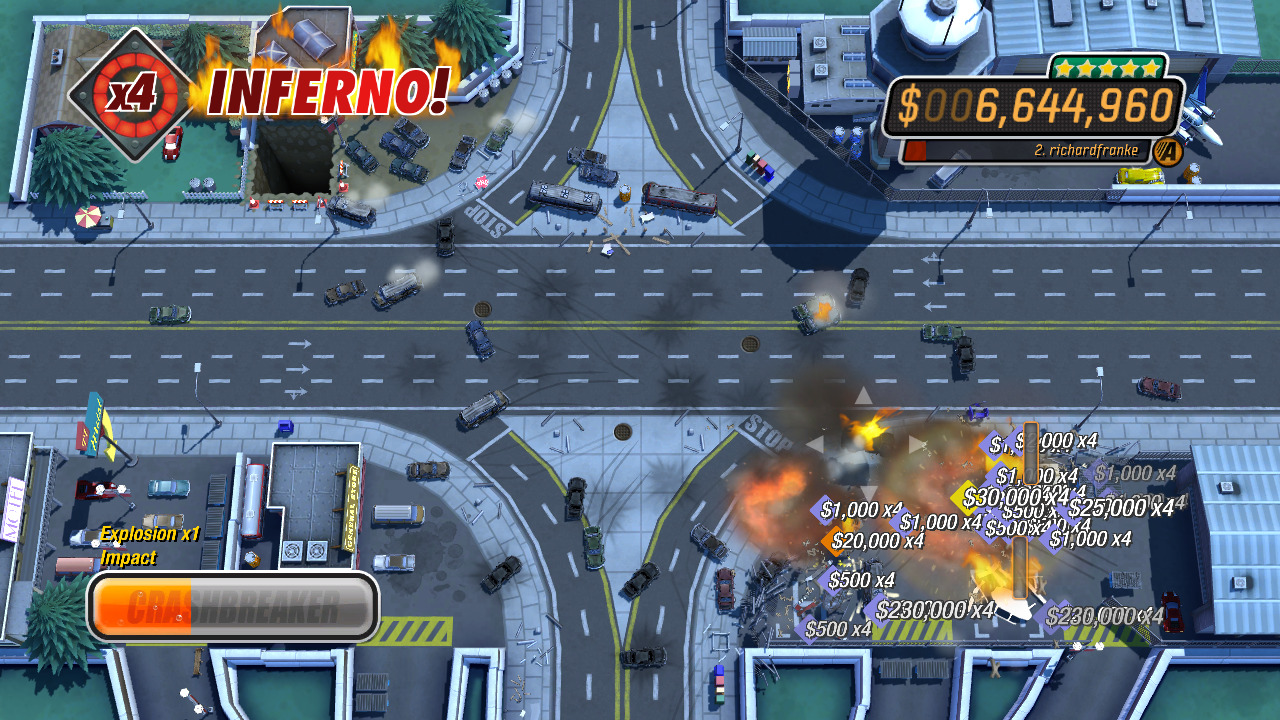 Don’t Judge me for liking my targets extra crispy.

This, at its core, is all that Burnout Crash is about. You, your chosen vehicle, and a crowded intersection loaded with Ford Pintos. Each stage in your road trip begins with you barreling headlong into an intersection and racking up vehicular pile-ups for fun and profit. The bigger the crash, the better your score, and if you can chain cars into other cars or nearby structures, you acquire bonuses. If you can cause a crash that triggers certain events, you also gain skillshot points and possible multipliers to your final score.

Add to this that there are specialty targets like bulldozers, ambulances, gas tankers, missile truck, armored cars, cops (helpful and non helpful variety), taxis and pizza trucks to interact with (both violently and non-violently) and the game can take many turns for the unexpected and profitable. Pizza trucks are the best because they have a tendency to make things interesting on the Pizza of Fortune. Give the Wheel a spin,  and you find out that there’s nothing like maxing out all vehicle speeds on the board for more kinetic crashes, or summoning a squad of cops to block off an intersection that your vict… uh, the other drivers, could escape through. 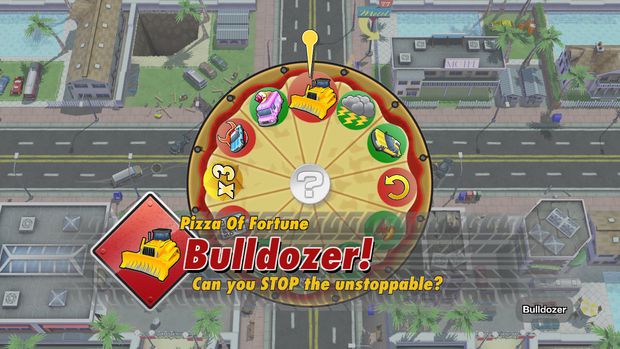 Bulldozer pizza is an acquired taste.

And, wait… there’s more! I always wanted to say that! But, seriously, there is more. One explosion… let’s be honest. That’s not enough explosions for a video game. That’d be a real dickish, Bushido Blade kind of move on the developer’s part. Once you’ve smashed into that first, sweet pile-up, you can then trigger an explosion. And, if that weren’t enough, you control the direction you go in afterward, sailing into further obstacles at the mercy of your analog controller. Different cars (unlocked by earning stars) have different explosion strengths and fine-tuned steerage for different styles of play – but the end result is the same. Someone at Farmer’s Auto Insurance is having a goddamned heart attack.

All of the modes of play use the above as their core mechanics, but each stage comes complete with three separate ways to play. Road Trip is an endurance match of sorts in which your primary goal is to do maximum damage until you fill the catastrophe meter to clear the board. You also have to keep cars from escaping the crash scene which is difficult to do. Add on top of this a list of criteria to be met to get optimal circumstances (5-star rating) and this mode can become maddening.

The second, Rush Hour, is by far my favorite. In this mode, Burnout Crash doesn’t give a good goddamn if the traffic gets away or not, just keep blowing shit up. You have ninety seconds to do maximum damage. There are certain goalposts to be met if possible, just like Road Trip, but it’s far less nerve-wracking since cars that get away don’t cause you grief. Once the ninety seconds are up, you go out with a bang and set off a massive explosion in an attempt to eke out just that much more damage to nearby structures and vehicles.

And now a slice of good old rural OH GOD I’M ON FIRE!!!

The last mode, Pile-Up, is a strange mixture of the previous modes. Pile-up will penalize you for letting cars go, but there are a set number of cars to be placed into the playing field. Once all of the cars are tallied and either wrecked or escaped, Inferno mode begins. Inferno mode can be kept going by (predictably) lighting shit on fire. The longer the flames burn, the easier it is for you to keep it going. The bigger fires, the better your chances of getting another chance to explode again and set more fires.

As an additional bonus, for you Kinect users out there, you finally have a game that doesn’t involve sports, dancing or animals you can’t really pet. However, for those of you hoping for any kind of finesse… good luck with that. It might be that my Kinect has a problem distinguishing the blob of my torso from my underpowered extremities; and again, I hazard it might be my cramped living room with barely enough room for the sensor. But, either way, the motions do not feel natural. If you’re hoping for a good time with Kinect, you may be a little disappointed.

All things considered, I can see why this game is getting some buzz. It’s entertaining in a mindless sort of way, and I apparently lost two-hours in the blink of an eye playing it last night. I guess that gets this game a 4-stick rating. I’m not seeing it as a real life-changing game, but I can see this getting played for a while.

Full disclosure: This review is based on a copy of Burnout: Crash purchased by Hey Poor Player.